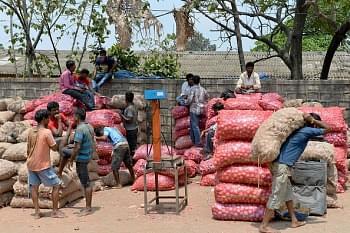 Indian labourers go about their business around sacks of onions at the APMC yard in Bangalore. (Manjunath Kiran/AFP/Getty Images)

While opposition parties can claim otherwise, farmers in Karnataka seem to have taken to open markets with glee. As reveal recent numbers in the APMC cess revenue, there has been a drastic dip in the money generated by APMC due to reduced rates as well as the new farm laws.

The state government had already reduced the cess levied at the 161 APMCs in state from a hiked up 1 per cent of the transaction value to a much lesser 0.6 per cent around 29 December 2020. This was following a bandh observed in APMC yards across Karnataka for hiking the cess from 0.35 per cent to 1.0 percent.

This alongwith the APMC act have resulted in almost a 50 per cent decline in cess revenue say reports.

According to numbers revealed at a quarterly review meeting of Karnataka Development Programmes, figures from different APMCs revealed that the collections for the period of November-January 2020-2021 were almost half of what they had been in the previous year.

And this is because an increasing number of farmers are now selling directly at open markets, said an officer at the meeting, as quoted.

In Shivamogga, the monthly cess collection has dropped from Rupees 3.5 -4 crore to 55-60 lakh. In Chikamagaluru too the decline in revenue collection is of similar proportion as the figures earlier stood at Rupees 2-3 crore but have now dropped to Rupees 30-40 lakh.

In Kalaburagi, as per reports, while the revenue at the end of last year was Rs 8.21 crore, this year it is estimated to crash to Rs 4.8 crore with the APMC showing 27 employees the pink slip.

While the collection at eight APMCs of Bellary district stood at Rs 36 crore, its collection this year around is said to be only Rs 7.10 crore.

There has been a 90 per cent reduction in the revenue of APMCs in Davanagere says this report, while in Udupi the contrast is between 9.5-10 crore last year as against an estimated Rs 2.5 crore this year.

Dharwad APMCs are pinning the collection at Rs 88 lakh this year against 1.62 crore in the previous year, while in Hubballi the collection for 2019-20 was Rs 7.86 crore as against the present Rs 1.72 crore.