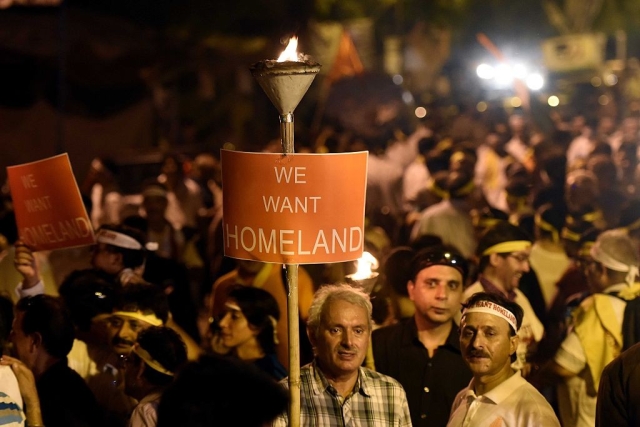 19 January 2019 marks the 30th anniversary of the fateful night when thousands of Kashmiri Hindu families locked themselves inside their homes as the Valley reverberated with Islamist slogans and war cries — asking the minority to leave, convert or die.

The next day, they left the Valley. Thirty years later, there’s finally some debate and outrage on the web and in opinion columns, but most Kashmiri Hindus continue to live outside the Valley, as refugees in their own country.

Kashmir — that land graced by the mighty Himalayas — which gave us the Shakta and Shaiva traditions, is today not known for inclusiveness or ‘peace’, as some would desperately have us believe.

Those charlatans who, today, passionately spout the virtues of secularism, must be reminded of the most horrific holocaust that they allowed to unfold — an unprecedented communalism rooted in hatred for the ‘other’ and burst upon an unsuspecting people, ironically, in a land known to respect diversity.

Not much has been written about this aspect of Kashmiri history, and very little is known about the state’s real past. It is, therefore, opportune that we present the following books for a better understanding of these issues.

1.‘Language of belonging: Islam, regional identity, and the making of Kashmir’ by Chitralekha Zutshi

This book is a scholarly study of a relatively recent period in the history of Kashmir (1846-1953), the period of Dogra rule. It attempts to show that there is nothing inevitable about the identity of kashmiriyat.

2.‘Culture and Political History of Kashmir’ by PNK Bamzai

Till the appearance of this book, there was no authentic and comprehensive history of Kashmir available in English. This work filled, to a great extent, the void. Jawaharlal Nehru says in the Introduction, “This fairly comprehensive history is, so far as I know, the only book of its kind and it is to be welcomed.”

3. ‘Kashmir: Behind the Vale’ by MJ Akbar

This book by former journalist and now BJP spokesperson MJ Akbar makes it to the list not for its contribution to the study of the Pandit exodus per se, but because it places religion and secularism as a a critical part of the Kashmir issue. This approach helps in analysing the historical and socio-political contexts of the tragedy than the tragedy itself.

4. ‘Our Moon has Blood Clots: A Memoir of a Lost Home in Kashmir’ by Rahul Pandita

This first-hand account of the ethnic cleansing of Kashmiri Pandits from the Kashmir Valley was recently described by Ramachandra Guha as the most evocative book on the subject. Journalist Rahul Pandita tells the story of the exiled community through the story of his own family.

5. ‘My Frozen Turbulence in Kashmir’ by Jagmohan

This book becomes an important read because Jagmohan was the governor, Delhi’s man in Kashmir, from the mid-80s and through the critical period of ’89-90 when the Pandits were driven out of the Valley.

On 21 April 1990, Jagmohan wrote a scathing letter to Rajiv Gandhi. You can read it here in full. In this letter, Jagmohan rebuts the charges of communalism imposed on him and goes on to list the multiple instances of gross negligence of the central government in the face of imminent breakdown of constitutional machinery.

Video: In this chilling clip, terrorist Bitta Karate, who killed many Kashmiri Pandits, narrates the events in a sordidly simple manner.