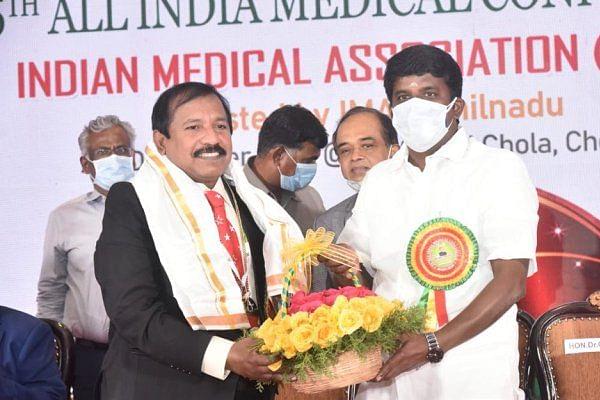 Indian Medical Association (IMA) is supposed to be a secular organisation protecting the interests of the professionals practicing modern medicine. However, Johnrose’s views make it amply clear that the the Association’s leadership is concerned as much about religion and religious identity.

Jayalal has been on a crusade against Indian government’s emphasis on the Indian medical systems like Ayurveda, Unani, Siddha, homoeopathy, yoga and naturopathy (AYUSH). His interview makes it clear that his problem is with the Indian culture and traditions, particularly Hinduism.

Jayalal sees the emphasis on AYUSH as government’s way of introducing the language of Sanskrit “traditionally based on Hindu principles” and he calls the ancient language the language of Hindutva.

“The most common system is modern medicine based on scientific evidence. The government of India, because of their cultural value and traditional belief in the Hindutva, believes in a system called Ayurveda,” he was quoted as saying in the interview.

“For the last three or four years, they have tried to replace modern medicine with this. Now, you will have to study this alongside Ayurveda, Unani, Siddha, homoeopathy, yoga, and naturopathy.”

“They want to make it one nation, one system of medicine. Next, they will want to make it one religion. This is also based on the Sanskrit language, which is always traditionally based on the Hindu principles. This is an indirect way for the government to introduce the language of Sanskrit and language of Hindutva into the minds of the people,” he said in the interview.

It is important to note that while sharing his contemptuous views about Hinduism and openly admitting using his position as a medical doctor for evangelism, Jayalal, who boasts of organising a country-wide strike against the government, doesn’t forget to play the victim.

“I am able to see, even amid persecution, even amid difficulties, even amid the control by the government, even among the restrictions we face in openly proclaiming the message, by various means and ways, Christianity is growing,” he writes.

Of course, Jayalal forgets to mention the long history of Hindu persecution in India- which includes burning alive Hindus on the stake. He also forgets how Christian missionaries have been the colonialism's "agent, scribe and moral alibi” and acted as the "ideological shock troops for colonial invasion”. He also forgets to explain how “even amid persecution”, Catholic Church with close to 2 per cent population as adherents is the largest private landholder in India.

Jayalal seems to be of the typical imperialist mindset which demands tolerance for own expansionist and supremacist plans and sees it as a fundamental right. The values of mutual respect and reciprocity are too far fetched,

The chief of the IMA doesn’t bat an eye in openly admitting of taking advantage of the vulnerability of sick persons and misusing his position as a doctor to carry out his evangelist agenda in the hospitals. It doesn’t occur to him that the fact that, by his own admission, his “primary concern” is evangelising the patients, shows how blurred the boundaries of abuse and exploitation are in his zealous head.

“I am working as a professor of surgery in a medical college, so it is also a good opportunity for me to carry on the principles of Christian healing there. I also have the privilege of mentoring graduates and the interns,” he added.

Jayalal has a problem with the Indian government protecting its traditions and culture which have been a part of this land for thousands of years, but doesn’t see any problem with using secular spaces like hospitals to promote and carry out “Christian healing”.

He minces no words in saying that during the COVID-19 pandemic, neither the NGOs which included all religious hues, nor the Indian government, but only the Christian churches took care of the people.

“The majority of people who got sick were from the middle or top socioeconomic statuses. The people on the lower level — yes, it was a problem, but most of the time it’s really the churches who were taking care of them. The government has not come forward to support them,” he said.

As unfortunate as it is that Indian Medical Association, a body that claims to have over 3,30,000 doctors as its members, allows important post-bearers to use their stature for religious work and ideological agenda, it is more unfortunate that there is simply no accountability for such people.

No media persons, no scholars will ask difficult questions regarding this either to IMA or to Jayalal himself. In fact, Dr Jayalal had the audacity to give the ridiculous explanation that he was quoted out of context - how can that be when the interview was in a question answer format?

Our problem is neither with IMA nor with Jayalal. Our problem is with an ecosystem where open displays of bigotry and brushing away of the long history and crimes of Christian-Islamic imperialism is normalised.

Our problem is with the ecosystem where suffering spiritual abuse, exploitation and cultural appropriation silently by a Hindu is a proof of his tolerance and secularism, while a discriminatory model of secularism makes government property of her temples, and protects the agenda of Hindu hatred and annihilation of Hindu race under Article 25.

The most interesting part is when eminent scholars used elementary mathematics to solve complex social-historical questions. For them, no reality is higher than the reality of numerical strength of Hindu population (all the while proclaiming there is no such thing as a ‘Hindu’ but only a million castes).

Do they realise that trying to shut people up by shouting “majority” only constitutes a justification of majoritarianism?