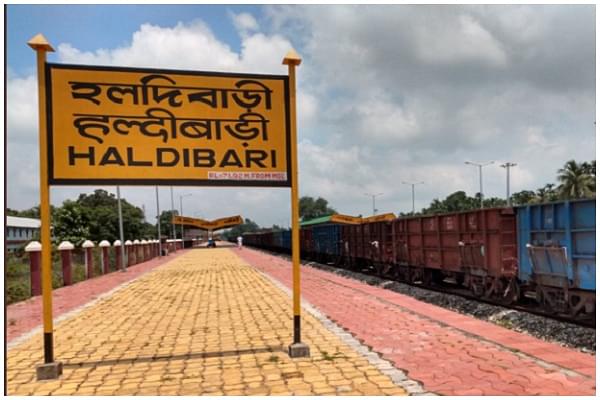 A freight train at Haldibari station in India.

With the joint efforts of Indian Railways and Bangladesh Railway, India and Bangladesh have started regular operation of freight trains through the restored Haldibari-Chilahati rail route from August 1, 2021.

In a significant step to boost railway connectivity between India and Bangladesh, the Haldibari (India)-Chilahati (Bangladesh) rail link was reopened by both the Prime Ministers of India and Bangladesh on December 17, 2020 for movement of passenger and goods traffic.

Indian Railways has dispatched the first freight train loaded with stones from Damdim Station of Northeast Frontier Railway (India) to Bangladesh.
Around 20 freight trains per month are expected to be interchanged through this rail link.

The link is intended to improve freight and passenger connections between Bengal and Assam regions, and will aid the growth of trade and economic development.

The distance between Haldibari Railway Station till the international border is 4.5 km, while that of Chilahati is around 7.5 km till the ‘zero point’.
As of now, five links connecting India with Bangladesh have been made operational, which include Petrapole (India)-Benapole (Bangladesh), Gede (India)- Darshana (Bangladesh), Singhabad (India)-Rohanpur (Bangladesh), Radhikapur (India)-Birol (Bangladesh) with Haldibari-Chilahati forming the fifth such link.

The Haldibari–Chilahati rail link between India and then East Pakistan was operational till 1965. This was part of the Broad Gauge main route from Kolkata to Siliguri during partition.

Trains travelling to Assam and North Bengal continued to travel through the then East Pakistan territory even after partition.

However, the war of 1965 effectively cut off all the railway links between India and the then East Pakistan. A passenger train service, New Jalpaiguri-Dhaka-New Jalpaiguri Mitali Express was announced jointly by Indian PM and Bangladesh PM during the Indian Prime Minister’s visit to Dhaka, Bangladesh, on March 27 this year, service of which could not be started due to the Covid-19 pandemic.