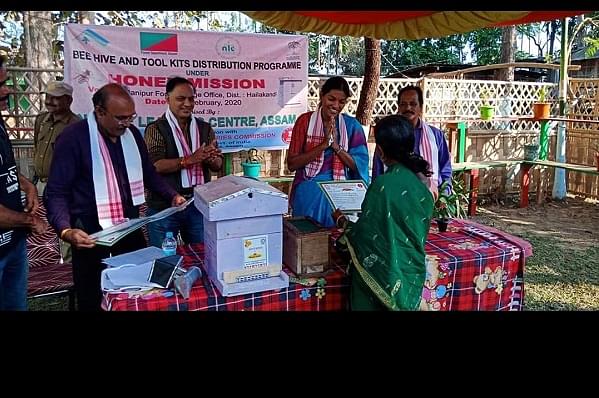 With higher yield in the offing, distressed migrant workers involved in Honey Mission await a bumper harvest during December-March period.

The self-sustainability measures initiated by Khadi and Village Industries Commission (KVIC) in the wake of the Covid-19 pandemic have begun yielding results.

The workers who were engaged with KVIC’s Honey Mission in Uttar Pradesh in the month of August, have reaped their first honey harvest and are awaiting a bumper bee collection.

To begin with, five migrant workers in Western UP’s Muzaffarnagar district extracted 253 kg of honey from their 50 honey bee boxes that were distributed to them on 25 August this year.

Raw honey sells at an average of Rs 200 per kg and at this rate, it is estimated to fetch nearly Rs 50,000 to the migrant workers.

This means an average income of Rs 10,000 to each of these beneficiaries.

A total of 700 bee boxes were distributed to 70 migrant workers after training by KVIC in this region. Honey extraction from remaining bee boxes will continue in the coming days.

The production of honey from these boxes will increase by at least five times in the months from December to March as the Eucalyptus and Mustard crop will be in full bloom during the season.

Each of these bee boxes will produce nearly 25 kg of honey during the peak season.

Further, the beekeepers will be able to migrate their boxes to nearby states like Haryana, Rajasthan and Eastern Uttar Pradesh where honey bees will find abundance of pollen and nectar and thus add to honey production.

KVIC Chairman Vinai Kumar Saxena said it was heartening to see the migrant workers reconnecting to their roots and engaging in self-employment.

“These distressed workers who had returned to their homes from other cities were roped in for Honey Mission as part of the Atma Nirbhar Bharat Abhiyan. It is great to see that in just three months, the workers have begun earning a livelihood on their own. The production of honey and their income will grow by manifold in the coming months,” Saxena said.

The beneficiaries thanked KVIC for the support and said beekeeping enabled them to earn their own livelihood without having to migrate to other cities in search of jobs.

“I am thankful to Prime Minister Narendra Modi, whose vision for Atma Nirbhar Bharat has created local employment for us. We are five workers who got 50 bee boxes and in just three months, we have extracted 253 kg of honey,” said Amit Kumar, a KVIC beekeeper in Saharanpur district.

Notably, responding to the Prime Minister’s call for Atma Nirbhar Bharat, KVIC engaged hundreds of migrant workers in Uttar Pradesh and Bihar and engaged them with its flagship schemes like Honey Mission, Kumhar Sashaktikaran Yojana and Project DigniTEA among others.

Apart from distributing them with essential tool kits, KVIC also provided technical training and supervision to the new beekeepers to support them.