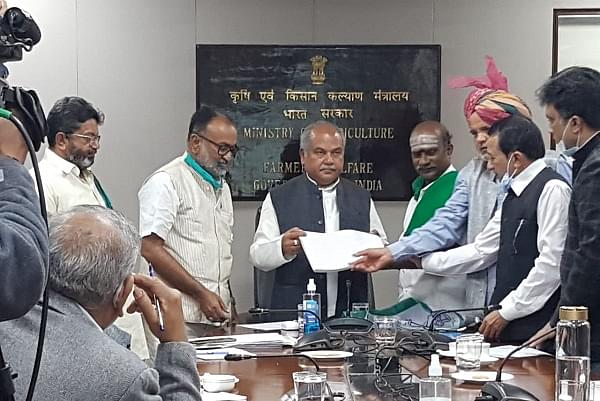 Union Agriculture Minister Narendra Singh Tomar on Thursday (17 December) wrote a letter to the farmers of the country and assured them that the government is ready to give a written assurance regarding MSP.

The letter came in response to the agitation by some farmers' organisation against three new agriculture reform laws passed by the government.

The agitating farmers have been demanding legal guarantees for Minimum Support Price (MSP) from the Centre, reports India Today.

In the eight-page letter, Tomar said that most of the farmers' organisations are happy with the agri-reforms laws. However, confusion is being created among some farmers regarding the laws by a certain section as part of a conspiracy to create tensions based on falsehood.

Tomar said that he hails from a farmer's family and since childhood, he had experienced the tough life of farmers.

He said that despite the Covid-19 pandemic related problems, the farmers of the country have produced a bumper crop.

"It is very satisfactory that after implementation of the law, MSP procurement has set a new record this time," Tomar said.

He added that at a time when the government is making record procurement at MSP, some people are lying to the farmers that the MSP system will be ended.

He said that the government will never end the MSP system. "MSP system is and will continue to exist," the minister said.

"In the last six years, the Modi government has taken a lot of steps for farmers. Through these bills, the government has provided an additional option for farmers to sell their product anywhere they want," Tomar said.

He said that the Modi government is committed to the farmers both with its policies and intent.

The government is continuously working to remove the confusion being spread about the MSP, mandis and farm lands and is holding discussions with farmers and organisations to allay their fears regarding the new agri-reform laws, he said.

The Agriculture Minister also attacked the Congress and said that the party which sat on Swaminathan committee report for eight years cannot be a well-wisher of the farmers.

He also question the intent of some farmers' organisations that have been supporting the agri-reforms till two-three months back but now were protesting against them.

In the letter, the minister said that the government is ready to give written assurance regarding the MSP.

He further assured that the agri-reforms will lay the foundation stone of a new chapter in the agriculture sector in India.