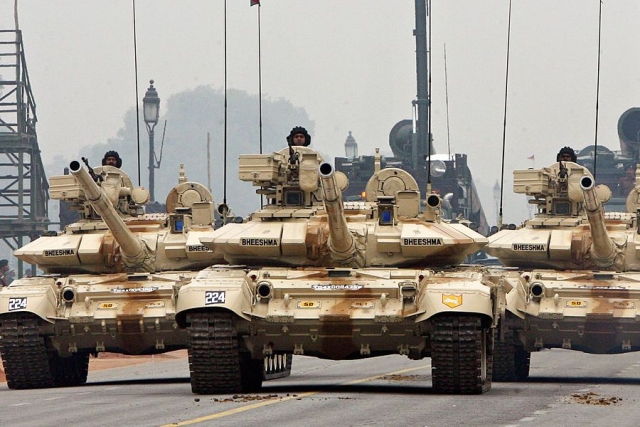 In a significant ramp-up of the defence preparedness along the Line of Actual Control (LAC), India has for the first time deployed a squadron of missile firing T-90 battle tanks at Daulat Beg Oldi (DBO), reports Hindustan Times.

Along with T-90 battle tanks, India has also deployed a full brigade of 4,000 soldiers and armoured personnel carriers at India’s last outpost in DBO which lies at a height of 16,000 feet, just south of the Karakoram pass on the banks of Chip-Chap river.

The report states that special equipment have been used to deliver the said artillery as some bridges on the Darbuk-Shyok-DBO road cannot handle the weight of a 46 ton T-90 tank.

The move is aimed at preventing possible Chinese aggression close to the Shaksgam-Karakoram pass axis. The Chinese People’s Liberation Army (PLA) has also deployed close to 50,000 troops in Aksai Chin region across the Line of Actual Control (LAC).

It should be noted that the Indian Army had already deployed M777 155mm howitzer guns and 130 mm guns at DBO after China had launched misadventures at patrolling points 14, 15, 16, 17 and the Pangong Tso finger areas.

The Indian Army is keenly watching the movement and deployment from the PLA while matching the troop strength in the region. The report quotes a top official as saying that the disengagement is work-in-progress with each side verifying the movements of the other.

The report further quotes top commanders as suggesting that the PLA could seek linking of the G-219 (Lhasa-Kashgar) highway to Karakoram pass through the Shaksgam pass.

“Once the link is completed, the PLA will put pressure on DBO from the north as it needs a buffer to prevent the Indian Army from targeting the road,” says the report.