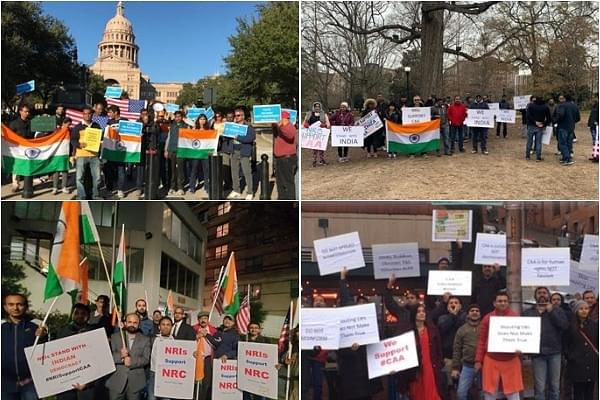 Pro-CAA rallies in parts of the US

The Indian diaspora in the US comprising of several hundred organisations held rallies in various parts of the country like in support of the citizenship amendment act (CAA).

As per the participating organisations the rallies were aimed at dispelling, “deliberate propaganda of hate, lies and downright absurdities spread by US based Pakistanis and some Muslim and leftist organisations”.

Further rallies are being planned in the coming weeks at Dallas, Chicago, San Francisco, NYC, DC, Atlanta, San Jose and other locations.

Archana Sunil one of the organisers of the Seattle rally designed to counter the anti-CAA rally by Indian American Muslim Council and other leftist organisations at Victor Steinbrueck Park claimed, "The anti-CAA rally signs were stating lies about Muslims being discriminated in India, Indian Muslims needing to prove their citizenship, Modi being Hitler, CAA and NRC akin to genocide”.

She also claimed there was rampant misinformation among the members of the Muslim, leftist rallies and in contrast the pro-CAA participants were very well informed.

Achalesh Amar, spokesperson for Houston rally says, ”the Houstonians came out in big numbers to support the Indian Government decision in bringing CAA to provide relief to oppressed minorities in neighbouring Islamic countries of Pakistan, Bangladesh and Afghanistan”.

He added, ”instead of having civil debate based on facts some organisations are bent on subverting any discourse or the truth, by spreading completely absurd lies and what is lost in their discourse is the plight of those who suffered untold sufferings since partition of India”.

To understand the magnitude of the issue he said we need to reflect that in 1947 the percentage of Hindu/Sikh population in Pakistan was nearly 23 per cent and today is about 1.5 per cent, similarly in Bangladesh it was 30 per cent Hindus in 1947, now reduced to about 10 per cent.

He alleged that a casual perusal of facts of 1971 Bangladesh war show how Islamists killed nearly 3 million Hindus, raped anywhere between 200,000 to 300,000 almost all Bangladeshi Hindu women, internally displaced an estimated 30 million people and systematically attempted to purge any Hindu influence in Bangladesh.

“How can they not only just brush aside facts but actually invent total lies about it? US Government need to look into their views and the potential dangers they pose to Americans in our own country”, he noted.

Venugopal Uppala one of the organisers of the Texas rally noted that the proposal to grant citizenship to those oppressed minorities was proposed by freedom fighters and politicians across many parties since India’s independence.

He thus argues that with such a history how could one say that the bill has something to do with the BJP and its politics? He alleged that people with the same mindset and agenda as the oppressors in the Islamic countries are now in the forefront of this anti-CAA rallies and thus they felt the need to counter their blatant lies.

Vineet Goel, an organisers of the Dublin rally said, “we held this rally to counter the fear mongering of Islamic and leftist organisations about CAA and NRC, their bizarre statements that NRC in combination with CAA is designed to expel Muslims from India”.

“Those who do not have the required paperwork have same challenges whether that person is a Hindu or Muslim and in spite of so many assurances from Modi Government that every effort will be made to ease the process for every citizen, these organisations keep peddling their agenda”, he added.

Arvind Modhini, organiser for Raleigh rally which was attended by over 75 eminent doctors and community leaders noted that they are pained by the destruction caused by some Muslim groups with the alleged support of the Congress, thus reminding some of them of the partition days they lived through.

He added that they came together to extend their support to Prime Minister Narendra Modi and demanded strict punishment for rampaging mobs who destroyed public property and targeted police personnel.

Ashok K Karmakar, Chairman of Bangladesh Hindu Buddhist Christian Unity Council (BHBCUC) too has come out in support of CAA, by thanking the Indian government for enacting this act.