Kamlesh Tiwari’s Son Touching Yogi’s Feet Is No Insult To Brahmins; SP’s Charge Is An Attempt At Caste Politics 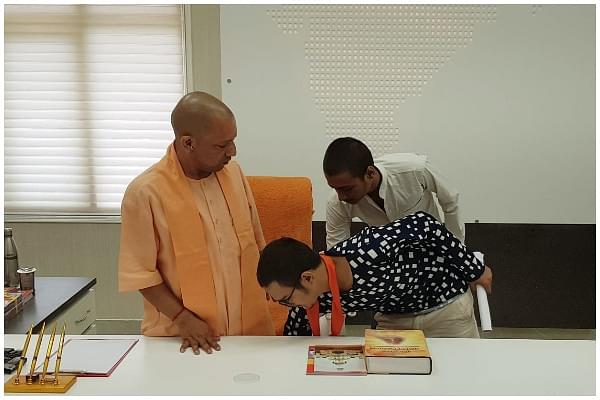 According to his son, Satyam Tiwari, and wife, Kiran Tiwari, at the meeting that lasted 30 minutes, CM Adityanath assured them that a thorough investigation would be carried out and the murderers would be given capital punishment.

Referring to the CM as "Maharaj ji", Kiran Tiwari has said that though the family met Yogi Adityanath as the chief minister, they have been his followers for a long time.

She said, "Maharaj ji to hamare sabke pehle se poojya thhe (for us, right from the beginning [from before he became the CM] we have revered him)". Kiran Tiwari was referring to Adityanath as the 'mahant' of the largest math in Uttar Pradesh named after Gorakhnath — the sant of the 'Nath Sampradaya'.

Talking to ANI after their meeting with the CM, Kiran Tiwari mentioned that Adityanath was like an elder family member and this was the reason for them to meet him and put their demands before him.

The family is in mourning but even in their tragedy, they stepped out from their home to meet Adityanath. Tiwari's mother has said that they had to do this as they were compelled to do so. Sections of the media have said that a reverse gesture — of Adityanath visiting the grieving family — was expected of the CM.

Earlier, Satyam Tiwari had said that he had no faith in the state government and he would demand an NIA (National Investigation Agency) investigation. Then the meeting between him and Adityanath happened.

A picture clicked at the same meeting has now become the talking point.

In the picture, Satyam Tiwari can be seen bending to touch Adityanath's feet, out of respect.

This customary gesture of touching the feet is extended to elders, sanyasis and people commanding respect in the Hindu tradition. Satyam, who is in the midst of a personal loss and in mourning, followed this custom.

Adityanath's supporters on social media feel that not going and visiting Tiwar's grieving family has created an impression that the CM is insensitive in general, and that he has given his opponents the opportunity to take advantage of the situation.

Adityanath's opponents see this gesture by Satyam as Adityanath’s insensitivity towards Hindu rituals, and his highhandedness. His opponents have raised this point only to go for the caste angle, saying that Adityanath did this with an intention to hurt a slain Brahmin and his kin.

It is following him once again but being dragged along with Adityanath into the caste fault lines is the caste too.

(The government has released this photo with the intention to insult the family of slain Kamlesh Tiwari; their intention is only to insult; since when has the son of a Brahmin touched the feet of a Thakur from the hills? This is prohibited in Hinduism.)

The grim commentary on caste lines ensuing on the social media surrounding the meeting with Adityanath points at how the Brahmin in Uttar Pradesh continues to be caught in the caste hegemony in politics. A slain Hindu is suddenly being identified as a Brahmin. A sanyasi is identified as a Thakur from the hills. A monk CM is seen as a Thakur in robes.

Brahmin, the caste, is still at the centre of Uttar Pradesh’s politics and still associated with characteristic bitterness.

Adityanath's own debut as Uttar Pradesh’s CM was marked by media chatter on caste lines. Subsequent elections saw the opposition's clamour to win the Brahmin vote — which is around 10 per cent — intensify and 2019 was no exception.

Brahmin — the caste — was once considered the pillar of Congress' strength in Uttar Pradesh, for it had given them Brahmin kings until 1989 and kingmakers until 2019. The caste was used to empower the "social engineering" in Mayawati's rise in UP politics. Mayawati enjoyed the trust and support of this influential caste.

There have been several instances of members of powerful political lineages in Uttar Pradesh rightly touching the feet of elders to stitch pre-poll alliances. Caste is never in question there as the optics were about respect for elders, lineages, experience and seniority.

However, different rules seem to apply for Adityanath, who is either seen in saffron by his opponents or as a Thakur by his rivals.

However, for many people in the state, across its thick caste spectrum, Adityanath holds a place of respect, following, and even reverence.

They consider questioning Yogi Adityanath — the administrator — their right as citizens and voters, but that does not take away their gesture of respect towards him, even when there is a lack of trust or disappointment with any policy or scheme.

In Adityanath's stint as the Uttar Pradesh CM, he is targeted for being a Thakur. Many in the opposition and media have previously referred to him as "Ajay Bisht". This was his name before he became a sanyasi.

A sanyasi, according to Hindu dharma, does not belong to any family or caste. This is conviniently forgotten, and the trend to refer to Yogi Adityanath by his pre-sanyasi name and jati has returned during the last two days.

If Adityanath was a little more expressive or willing to express his status as a caste-neutral sanyasi, this would not have happened. Neither has any BJP leader — Brahmin or non-Brahmin — countered the caste-centric comments from Adityanath's opponents.

Yogi Adityanath's test lies in how he lives up to the assurance he has given to the Tiwari family, and in curbing crime in his state. This he must do for the state and not prove himself or anyone right or wrong on the caste fault lines that chase him.