Karnataka: As Floods Recede And Life Limps Back To Normalcy, Yediyurappa To Form Cabinet On 20 August 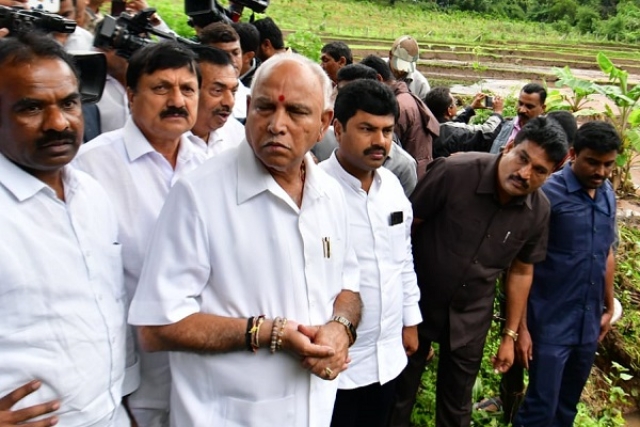 As life limps back to normalcy in the flood ravaged state of Karnataka, Chief Minister B S Yediyurappa announced that he will be forming his new cabinet on 20 August.

Yediyurappa will chair the BJP legislature party meeting at the Vidhana Soudha on Tuesday morning (20 August) before forming the cabinet in the afternoon. The names of legislators to be inducted in the council of ministers have not yet been disclosed.

Yediyurappa, who won widespread appreciation even from his critics for his leadership in managing the relief operation during the unprecedented floods, secured the go-ahead on Saturday (17 August) from BJP national president Amit Shah to undertake the exercise on 20 August.

Within hours of Yediyurappa winning the trust vote, the state began to face the fury of floods forcing the new Chief Minister to plunge into managing its catastrophic consequences leaving him little time to perform the delicate task of cabinet formation. He was running the government as a one man cabinet for 22 days, while also leading from the front to manage flood relief.

According to highly placed BJP sources, the initial cabinet size is expected to be 15 with slots kept vacant for some of the disqualified Congress and JD-S MLAs, who may be inducted based on the outcome of the Supreme Court judgement. All of them have appealed against their disqualification.

Unlike the previous BJP dispensation, there will be no deputy chief minister post. The party is expected to perform the complex task of balancing social and regional aspirations. As part of the party’s strategy to expand its base in south Karnataka, it may induct more leaders from that region.

The major challenge will be balancing the caste equation as there are 39 Lingayat MLAs, the community Yediyurappa also belongs. The community forms the bulwark of BJP’s support base in the state.

Lingayats are the biggest support base for the BJP. The Lingayats are followed by the Vokkaligas, the most prominent faces among whom are former R Ashok, Dr C N Ashwath Narayan, C T Ravi and S R Vishwanath.

The party also needs to give space to MLAs from the Dalit community, Scheduled Tribes, Brahmins and MLAs from other Backward Communities. The 17 disqualified MLAs belonging to the previous Congress-JD(S) coalition government may also have to be accommodated in the government.

On Friday (16 August), BJP national general secretary B L Santosh and Yediyurappa had finalised the list and submitted it to BJP working president J P Nadda.

Also Read: One Man Government? How B S Yediyurappa Is Managing Flood Relief For An Entire State