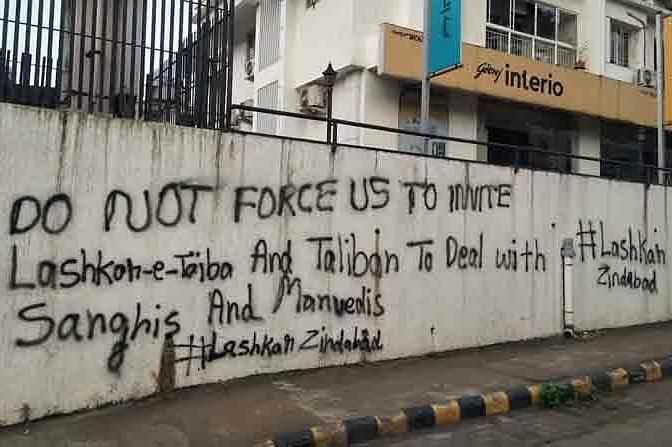 A week after pro-terror graffiti that threatened to ‘invite Lashkar-e-Taiba and Taliban to deal with Sanghis and Manuvadis’ appeared on the compound wall of an apartment complex in Mangaluru, the Social Democratic Party Of India (SDPI), the political arm of the radical Islamist group, Popular Front of India, has called it a ‘handiwork of Hindutva activists’.

The political party has expressed 'concerns' over the 'handiwork' and said it suspects involvement of the ‘Sangh Parivar‘ in the two incidents that saw communal messages painted on the walls of the coastal town.

The coastal town has a reputation for being a 'communal cauldron'.

Dakshina Kannada president of the SDPI, Ataulla Jokatte, drew parallels between the graffiti and other incidents like “hoisting Pakistan Flag at Sindhagi Tahsildar’s office, defacing a temple in Chamarajnagar with cattle head, and throwing a religious banner on Shankaracharya statue in Sringeri” and said the current incident, too, like these mentioned, seems to be a 'handiwork' of Hindutva activists, it was reported.

Calling it a “conspiracy by communal forces to disrupt peace in the district for electoral gains”, Jokatte said the failure of the police to act on their complaint against RSS leader Kalladka Prabhakar, who “made the anti-national statement comparing India with Pakistan” and other such ‘perpetrators’, had encouraged a similar mindset in the city.

This comes two weeks after the NIA conducted search operations in four offices of the SDPI in Bengaluru for its involvement in the riots in the capital city.

The first graffiti appeared on an apartment complex wall on the anniversary of the Mumbai terror attacks on 26 November. The wall was duly repainted after the city police registered a case against the perpetrators.

The apartment complex is situated less than half-a-kilometre from the city’s circuit house and a case was registered at the Kadri police station in that regard.

Even as investigations were on to nab the miscreants, another graffiti popped on the walls of the police outpost on the court premises. This one, again written using the English alphabet, read ‘Gustakh e Rasul ki eh hi Saza, sar tan se juda’ (beheading is the only punishment for those that insult the Prophet).

While pinning the blame on 'failure of intelligence' and questioning the delay in arresting the accused, Congress leaders protested at the Mini Vidhan Soudha in the city, while the SDPI has threatened “intensive protests across the district” if the police do not “immediately arrest the culprits”.

Interestingly, this comes just two weeks after the NIA conducted searches in four offices of the SDPI in connection with the Bengaluru riots.

During the raids, as declared in its press release, the NIA had seized incriminating material such as swords, knives, and iron rods from the premises of the Islamic party.

The investigative agency had also noted, as per reports, that the SDPI state secretary, Muzammil Pasha, in a meeting on the day of the riots directed the party members to incite violence by instigating the mob, as was reported.