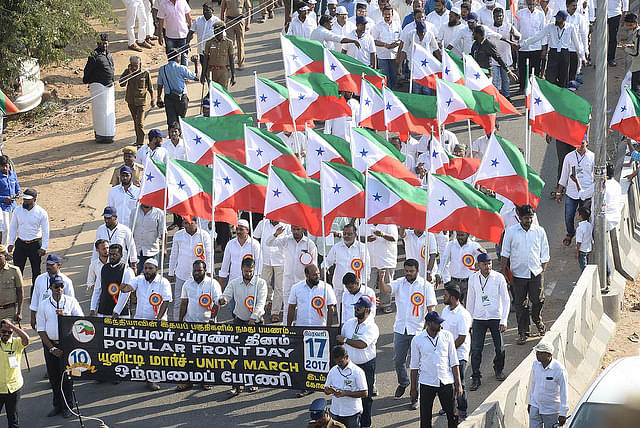 The Social Democratic Party of India (SDPI), the political arm of the Islamist outfit Popular Front of India (PFA), has called for stopping Union ministers from setting foot in Kerala.

SDPI Kerala president P Abdul Majid Faizi said ministers of the central government should not be allowed into Kerala since the Union government had reportedly denied flood relief to the state.

Faizi said his party would announce its programme on protests once Union Home Minister Amit Shah’s date of visit to Kerala was announced.

Shah will likely be on a private visit to Kerala on 15 January.

On Tuesday (7 January), the central government released Rs 5,908 crore as flood relief to seven states. Kerala did not figure in the list.

While a hue and cry has been raised on social media over Kerala not figuring in Tuesday’s relief package, state Finance Minister Thomas Issac has criticised the Union government for excluding Kerala.

But Kerala is not being meted out a step-motherly treatment as is being alleged.

In December 2018, the Centre had sanctioned Rs 3,048 crore as assistance from the National Disaster Response Fund to Kerala, which was affected by the worst floods in 100 years.

Besides, the state had got nearly Rs 3,000 crore for the 2018 floods. In August, Union Minister of State for External Affairs V Muralidharan alleged that Kerala had not utilised about Rs 1,400 crore given by the Centre for flood relief.

Floods affected the state last year, too, in which 121 people died, mainly due to landslides at Kavalappara in Malappuram and Puthumala in Wayanad district. Fourteen districts were also affected by the rains.

The SDPI is active in some parts of the country, especially Kerala, Karnataka and Tamil Nadu. The PFI, a successor to the National Development Front after merging with a few other Islamist fronts in 2006, is under scrutiny for its alleged role in the recent anti-Citizenship Amendment Act protests in Uttar Pradesh and Delhi.

At least 25 people having links with the PFI have been arrested by Uttar Pradesh police. The organisation has already been allegedly involved in political violence, including murders, in Kerala and Karnataka.

Besides Uttar Pradesh, Assam has also sought a ban on PFI, which has been banned in Uttarakhand.

Kerala Police had conducted searches on PFI premises during 2010-13 and seized weapons and country-made bombs.

On the other hand, the SDPI cadre was allegedly behind the murder of a Pattali Makkal Katchi member V Ramalingam at Mayiladuthurai in Tamil Nadu’s Nagapattinam district in February last year.

The Kerala leader of the SDPI, whose founder M K Faizy, threatened violence at a meeting to protest against the CAA, also demanded all surveys being carried out in the state on behalf of the Centre be stopped.

In another development, the Muslim League Youth has withdrawn its planned protest against Shah following the intervention of Indian Union Muslim League (IUML).

According to IUML national general secretary P K Kunhalikutty, the protest was cancelled as Shah will be in Kerala on a private visit.