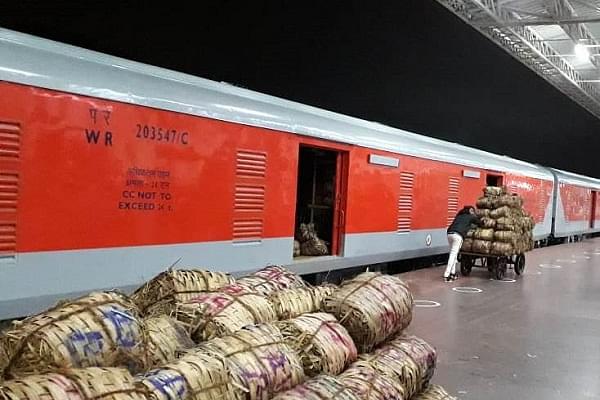 Produce being loaded on to a Kisan Rail.

With 60 routes being operationalised, Kisan Rail has so far carried 2.7 lakh tonnes of consignment across the country.

Introduction of Kisan Rail has given farmers wide access to Indian markets as Indian Railways, with its pan-India network, forms an integral part of the government plan to raise incomes in the farm sector by encouraging transportation by rail.

The railways has been relentlessly working with various stakeholders — including the Ministry of Agriculture and Farmers Welfare, state governments (including departments of agriculture/ horticulture/ fisheries, etc), and local bodies and agencies, mandis etc — to roll out Kisan Rail services.

According to the railways, speedy movement of Kisan Rail ensures minimum damage during the transit which ensures farmers can utilise the vast railway network to gain access to distant, bigger and more lucrative markets.

While 50 per cent subsidy is given in freight (being borne by Ministry of Food Processing Industries) for transportation of fruits and vegetables, there is no minimum limit on quantity that can be booked, enabling even small and marginal farmers to reach bigger and distant markets.

In compliance with the announcement made in Union Budget 2020-21, Kisan Rail trains have been introduced by the railways to move perishables and farm produce (including fruits, vegetables, meat, poultry, fishery and dairy products) from production or surplus regions to consumption or deficient regions.

The first train under the Kisan Rail scheme — between Devlali in Maharashtra and Danapur in Bihar — was flagged off by Railway Minister Piyush Goyal and Agriculture Minister Narendra Singh Tomar on 7 August 2020. This train has subsequently been extended to run between Sangola and Muzaffarpur.

The 100th trip under the Kisan Rail scheme between Sangola in Maharashtra and Shalimar in West Bengal was flagged-off by Prime Minister Narendra Modi on 28 December last year.

Till 18 June 2021, a total of 850 trips of Kisan Rail trains were operated on 60 routes, transporting more than 2.7 lakh tonnes of consignments.

Kisan Rail trains are run on time-tabled paths, and are being monitored for punctuality as well as to ensure that perishable commodities reach their destinations within due time, and also that Indian Railways’ resources are utilised in the most optimal manner.

Since the introduction of this subsidy scheme effective from 14 October 2020 till 15 June 2021, an amount of Rs 52.38 crore has been disbursed as subsidy through Kisan Rail.