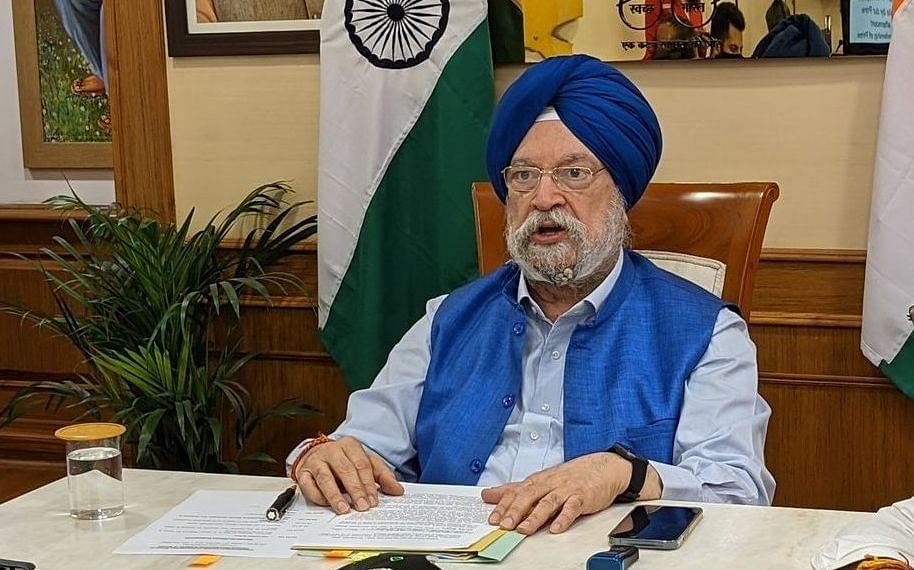 Addressing the webinar, the minister underlined the need for improved connectivity in India’s expanding urban centres and highlighted the progress made in the development of metros over the last six years, under the Narendra Modi government.

India’s cities are witnessing exponential growth and an increase in the use of personal vehicles, resulting in severe traffic congestion and pollution, Minister Puri said, adding, efforts to remedy this situation need to focus on improving our public transport system, the most sustainable of which is the metro rail.

“Till 2014, only about 248 kilometres metro network was operational in five cities. With a consistent push by the government, the metro network has expanded by more than 469 km, and today a total of 717 km of metro is operational in 18 cities,” the Minister for Housing and Urban Affairs noted.

“Under the metro rail policy, our focus is to develop an inclusive system together with multimodal integration and last mile connectivity,” the minister said.

The government, Minister Puri said, has conceptualised two new metro systems — Metro Lite and Metro Neo — for smaller cities with peak hour peak direction traffic or PHPDT of up to 50,000 and 8,000 respectively.

“First Metro Neo system of Nasik with a network of 33 kilometres has been included in the 2021-22 budget. The first Metro Lite system is proposed between Rithala and Narela as part of Delhi Metro's Phase IV project,” he added.

The minister also discussed the first Regional Rapid Transit System (RRTS) in the country, which is coming up between Delhi, Ghaziabad and Meerut.

“This corridor is an innovative dual transit mode with RRTS and metro on the same infrastructure over 22 km in Meerut city,” Minister Puri noted.

A Stellar Example Of Make In India For Atmanirbhar Bharat

Minister Puri said the government has managed to establish a robust manufacturing industry in the metro sector by standardising various components.

Standardisation ensures that that various metro rail components in new metro projects conform to prescribed standards, incentivising manufacturers to plan long term investment to set up manufacturing units, he said, adding, that this promotes indigenisation and reduces cost due to economies of scale.

“For example, the creation of domestic manufacturing capacity of the rolling stock component has lead to a considerable reduction in its cost..” the minister said, adding, “64 sub components of rolling stock, electrical and mechanical traction etc, have also been identified for procurement from local sources”.

He called metro a stellar example of ‘Make in India’.

‘Made in India’ metro equipment is also being exported to countries like Australia and Canada, Minister Puri added.

By 2030, more than 600 million people will be living in India’s urban centres, and we will have to cater to their demand, adding 600-700 km of metro lines every year, and that can happen only trough domestic manufacturing, the minister said.

In last two years, orders for 1,200 coaches have been placed with manufacturers in India such as BEML, Bombardier, Alstom etc, he added.

“If it were left entirely to the state governments, they would all demand regular metros of the kind we have. But the metro system is a capital intensive system... we want the best of infrastructure and yet shy away from the need to ensure that the project becomes economically viable,” the minister said, adding that the new metro systems like Metro Neo and Lite are helping ensure economic viability by bringing down the cost of constructing and operationalising metro down substantially.

“Metro Lite and Metro Neo are able to perform in terms of carrying capacity roughly the same load at a fraction of the cost,” Minister Puri noted.

The minister said a Metro Line system can be employed when the peak hour peak direction traffic or PHPDT is 15,000, and Metro Neo can be used 8,000 PHPDT.

“In the case of Metro Lite, the cost per km come down to Rs 120-140 crore. In case of Metro Neo, it comes down to Rs 60 to Rs 80 crore per km,” Puri said. It has required some persuasion, but the message has reached the states, he added.

We are moving in the direction of a Unified Metropolitan Transportation Authorities (UMTAs) the Minister for Housing and Urban Affairs said, adding that Kerala, Tamil Nadu, Madhya Pradesh and Karnataka already have it.

“We are insisting on this for every project that we now appraise,” he noted.

The creation of UMTAs will facilitate co-ordinated planning, implementation and management of urban transport programmes.