Moody’s India Growth Outlook Downgrade: What Will Be The Short-Term Impact 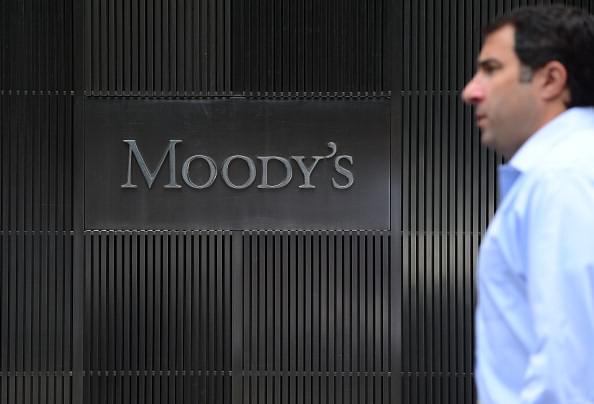 A sign for Moody’s rating agency at the company headquarters in New York. (EMMANUELDUNAND/AFP/GettyImages)

Friday’s fall has been attributed to a downgrading of Indian outlook by global ratings agency Moody’s Investors Service from “stable” to “negative”.

The rating change comes two years after Moody’s had upgraded Indian outlook to a safe Baa3. The change has been made owing to “increasing risks of lower economic growth than the past and reflecting lower government effectiveness at addressing long-standing economic and institutional weaknesses”, Moody’s said.

The Finance Ministry responded to the downgrading by saying that the fundamentals of the Indian economy remain robust with inflation under check and bond yields low.

"India continues to offer strong prospects of growth in the near- and medium-term," the ministry said.

According to a statement from Moody’s, the probability of an economic slowdown has increased despite various measures taken by the Indian government to tide over the slowdown in economic growth and financial stress faced by Indian households, especially in the rural areas.

Besides, the credit crunch among non-bank financial institutions and weak job creation were also a factor, it said and added that if gross domestic product (GDP) doesn’t return to a higher growth rate, the government would face problems in tackling the budget deficit and checking its debt rise.

Moody’s has been forced to downgrade its India rating since it sees the country’s fiscal deficit rising to 3.7 per cent of GDP during the current fiscal against the targeted 3.3 per cent. Slower economic growth and lowering of corporate taxes would result in a higher fiscal deficit.

The slower growth could prolong, it said, pointing out that the five per cent economic growth during the first quarter of the current fiscal was a six-year low as consumer and government spending was cut.

Moody’s could follow this up with a revised rating on investment but it is something that will have to be watched for.

On its part, the Indian government has undertaken a series of economic reforms to tackle the slowdown, from giving options to corporates on paying taxes to injecting life in the dormant real estate sector.

The downgrading will have a minimal effect since earlier too such downgradings or upgradings have been made and any impact has been minimal, especially in the stock market.

Some investors could be cautious to invest in Indian bonds and sovereign notes but that will likely not have much of an impact.

Festivals, harvest of summer agricultural crops and fiscal measures announced by the government could reflect in the economy in the October-December quarter. That will be the key to future investments than Moody’s rating based on the April-June quarter.