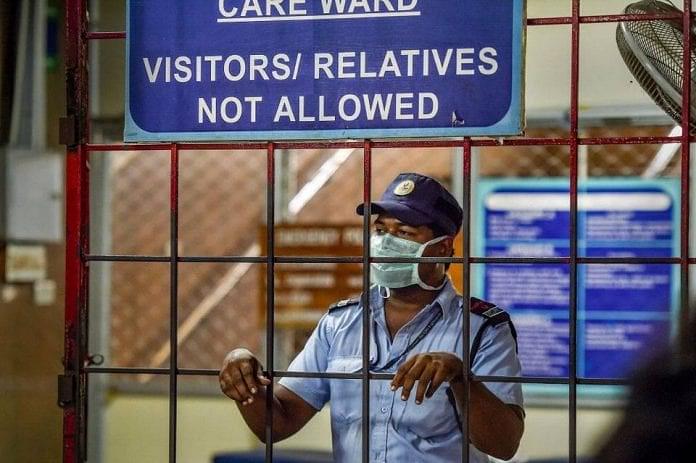 A security guard at a medical facility treating coronavirus patients.

Forty of the 54 people who have been quarantined at an exclusive facility in Kolkata’s New Town after having attended the Tablighi Jamaat congregation at Delhi’s Nizamuddin are foreigners.

Chief Minister Mamata Banerjee said they are from Myanmar, Indonesia, Malaysia and Thailand. All of them had attended the congregation at Nizamuddin organised by the Tablighi Jamaat, an evangelist organisation that has been banned in many countries, and is suspected to have ties to terror outfits.

All the 40 foreigners who were sent to the quarantine facility on Wednesday were staying in mosques. They were planning to spread out to various parts of Bengal and even Assam after the lifting of the lockdown to preach.

According to central intelligence sources, Muslim clerics from foreign countries have been regularly visiting and preaching in Bengal. This is in flagrant violation of their visa conditions since they come to India only on tourist visas.

Also, all establishments (excluding private residences) are required to inform the police about the presence of foreigners on their premises. However, none of the mosques and other mosque-run facilities where these foreign clerics stay ever inform the authorities about their presence.

Foreign preachers are in great demand in the rural areas and urban slums.

“The sight of a foreigner coming down to India to preach Islam, and more so the puritanical form of Islam that the Tablighi Jamaat propagates, is a powerful one that easily influences the socially and financially backward Muslims in the rural areas and the Muslim-dominated ghettos in urban areas,” said an Intelligence Bureau (IB) officer who has been tracking Muslim preachers from abroad.

The Bengal government said 42 people who had attended the Nizamuddin congregation and then travelled to Asansol and Midnapore will be brought to the quarantine facility at New Town today (Thursday). More people who had returned from Nizamuddin and gone to other parts of the state are being traced.

The swab samples of all those quarantined on Wednesday had been collected and sent for tests. The results are expected to reach the state health department by Thursday evening.