Naval Deck Tableau: CPWD Says It With Flowers On Rajpath 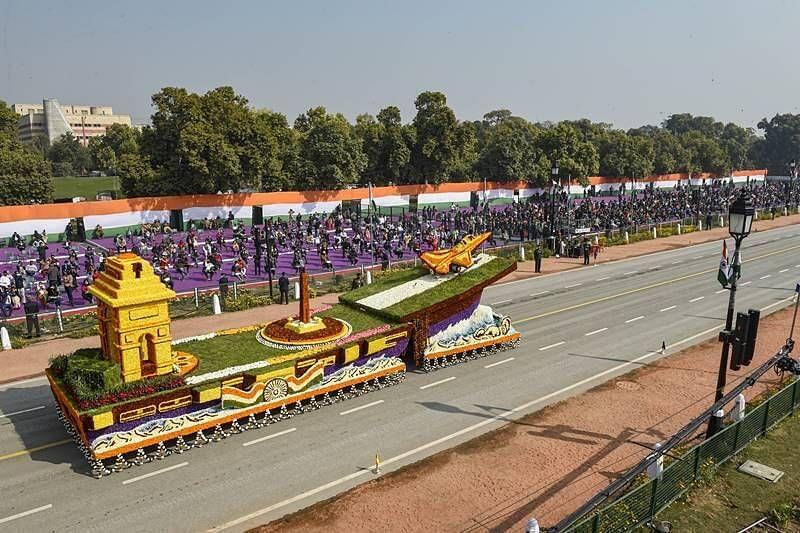 Mounted on a 45-feet-long trailer, the tableau of Central Public Works Department (CPWD) depicted a naval ship's deck, and rode down the Rajpath in full glory during India’s 72nd Republic Day parade.

Depicting INS Vikrant's deck, a warplane ready to take off, in the front and the India Gate at the back, all covered in a variety of colourful flowers, CPWD’s tableau drove in at the end of the cultural display.

Thousands of marigolds of yellow, orange, purple, white chrysanthemum, blue aster and cornflowers among others, and ornamental foliage like asparagus, were used to prepare the green base.

About 10 tonnes of flowers including cut flowers were used to deck up the trailer involving nearly 300 workers.

Every year we participate in the Republic Day parade and our tableau is always made of flowers only and many times we have been judged as the best, said a senior CPWD official involved in the preparation.

Every year it is a new theme, and this time we tried to showcase the War Memorial at India Gate and a war plan on the INS Vikrant's deck, the official added.

CPWD worked for almost two months to make the deck for the parade after finalisation of the design.

Flower works started on the 25th morning so that flowers remain fresh, and skilled employees under constant supervision of senior officers were involved in the task.

CPWD floral tableau was among the 32 tableaux that paraded on Rajpath showcasing flower power to the spectators.

The parade culminated with a single Rafale aircraft flying at a speed of 900km/hour carrying out a ‘Vertical Charlie’.

Ladakh led the display of cultural tableaux, the first-ever tableau of the Union Territory.

This year, a 122-member marching contingent and band of Bangladesh Army participated in India's Republic Day parade coinciding with the 50th anniversary celebrations of the 1971 liberation war of Bangladesh.