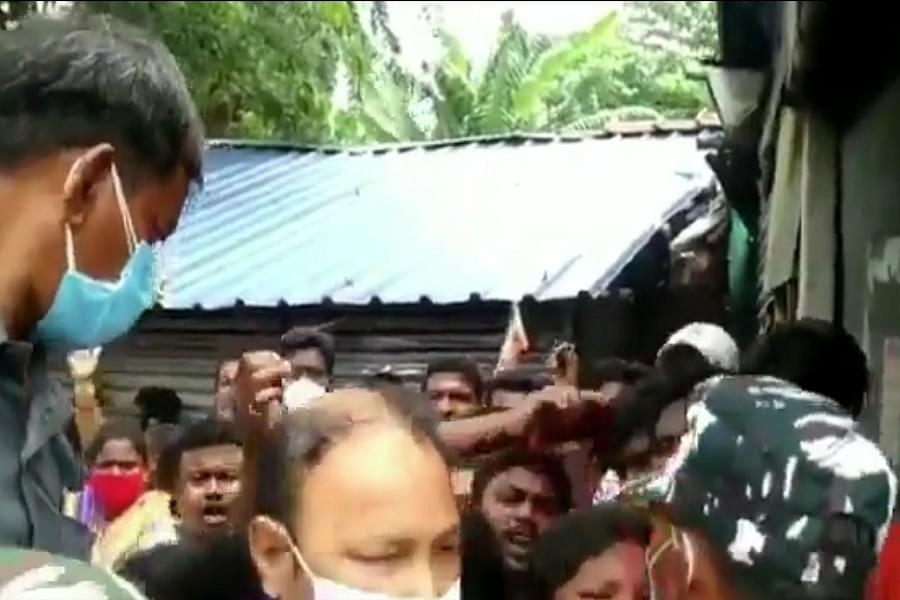 A team of the National Human Rights Commission (NHRC) which had been asked by the Calcutta High Court to probe post-poll violence in Bengal was attacked when it went to Jadavpur in Kolkata.

The team, led by NHRC member and National Commission For Minorities Vice Chairman Atif Rasheed, had gone to Jadavpur Tuesday (29 June) afternoon to see for itself houses of scores of BJP supporters that had been looted and ransacked.

Soon after the NHRC member started inspecting the abandoned houses and taking photographs, a murderous gang of Trinamool supporters converged and started shouting and heckling him. CISF jawans who had escorted Rasheed managed to keep them at bay (watch this video clip).

After spending some time there, Rasheed realised that the situation could turn ugly and started walking towards his vehicle. The angry group of Trinamool supporters followed him, baying for his blood.

The Trinamool supporters even pushed and fought with the CISF jawans to get hold of Rasheed. The NHRC member tweeted a clip of the murderous mob of Trinamool supporters chasing him. He also came down heavily on the state police who did nothing to hold back the mob and remained mute spectators.

Rasheed is part of the team constituted by the NHRC chairperson on the 18 June orders of the Calcutta High Court to probe post-poll violence and displacement of thousands of BJP workers and supporters.

A five judge bench of the Calcutta High Court headed by acting chief justice Rajesh Bindal passed an order on June 18 asking the NHRC to probe the cases of post-poll violence in Bengal and submit a report to the High Court.

Justice Bindal last week rejected a plea by the state government to reconsider its order, thus earning the wrath of the Trinamool which wants his transfer from the Calcutta High Court (read this).

The NHRC team visited various parts of the state and met thousands of victims of post-poll violence perpetrated by Trinamool goons. Large crowds thronged the CRPF camp at Salt Lake on Sunday and Monday (27 and 28 June) to meet the NHRC team and register their complaints.

The Mamata Banerjee government fears that the NHRC report will be a damning one and will lead to severe embarrassment. That is why, say observers, the ruling party is provoking its supporters to heckle the NHRC probe team members in order to scare them away and prevent them from collecting any more evidence about post-poll violence that can cause problems for the state government.