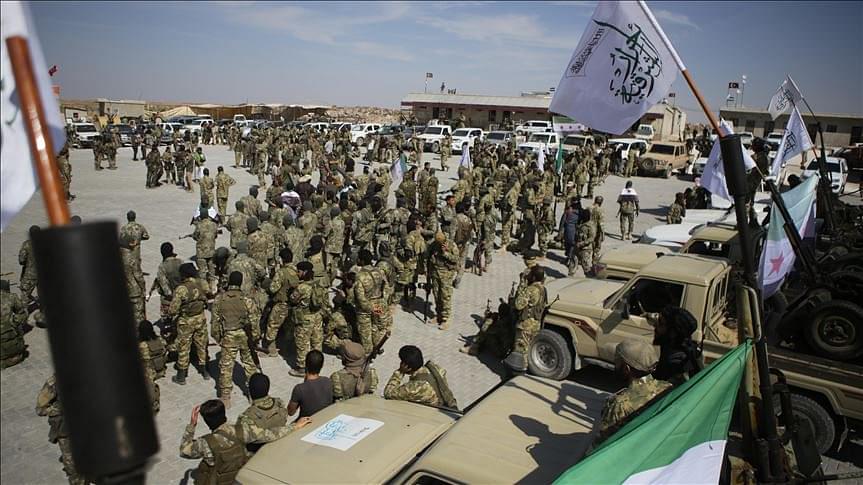 Rebels from the TFSA before the operation. (Pic via Twitter)

Turkish fighter jets and artillery have begun to strike Kurdish-held targets across Northern Syria near the Turkish border, and positions in and around Tel Abyad and Qamishli have been hit.

The confrontation between the SDF and the Turkish Military, which has also mobilised thousands of elite commandos for the operation, is likely to be large-scale and intense. The Kurdistan Workers' Party (PKK) which is the main Kurdish armed group inside Turkey, may also ratchet up the pressure within Turkish borders to help the People's Protection Units (YPG) which is the main Kurdish group within the SDF in Syria.

Turkish President Recep Tayyip Erdoğan took to Twitter to talk about the commencement of the operation.

“Turkish troops, Syrian National Army begin Operation Peace Spring in northern Syria against PKK/YPG, Daesh terrorists. Turkey's aim is to eliminate terror corridor in southern border, to bring peace and tranquility to region. Turkey to protect Syria's territorial integrity, free people of region from terror. We will enable return of Syrian refugees to their country via safe zone to be established with Operation Peace Spring,” he wrote.

Turkey’s stated aims are to rid Northern Syria of what it calls “terrorist groups” and create a safe zone along the border where refugees could be rehabilitated. But its detractors have claimed that it is a campaign with a single-minded goal to destroy Kurdish forces who were instrumental in fighting off extremist groups like the Islamic State.

Some have been even more severe in their criticism, accusing Turkey of indirectly and directly aiding the Islamic State against the Kurdish YPG, considering the country’s own political interest in defeating a domestic PKK-led Kurdish insurgency.

Turkey’s rapid mobilisation and subsequent large-scale invasion of SDF-held territory East of the Euphrates comes after President Donald Trump finally gave in to Turkish demands that the US withdraw its observers in Northern Syria, whose presence was preventing the launch of a major operation against the Kurds.

Trump’s decision was criticised by some quarters for ostensibly ‘abandoning’ one of the US’s most effective and reliable allies in the Middle East. For his part, the US president took to Twitter to indicate that there would be major economic repercussions against the Turks if they went “off limits”.