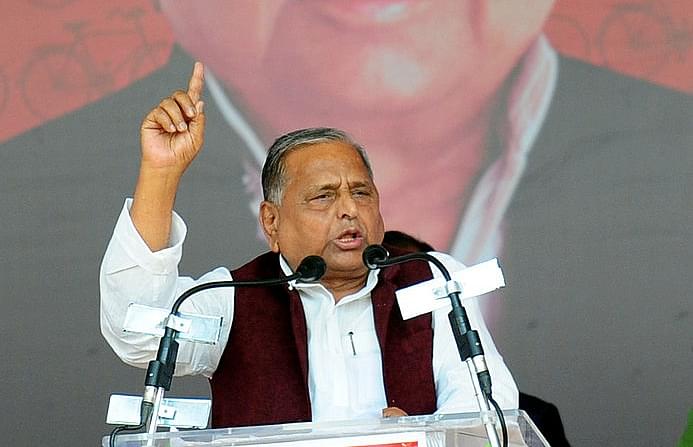 Ahead of the crucial third phase of the UP 2022 Assembly Polls, SP patriarch and former Uttar Pradesh Chief Minister, Mulayam Singh Yadav, on Thursday (17 February), in his first appearance in an election rally since 2019, made an emotional appeal for votes in favour of his son and SP chief Akhilesh Yadav, to the people of Karhal assembly constituency of Mainpuri, Uttar Pradesh.

Speaking at the election rally, Mulayam Singh Yadav, aka ‘Netaji’, sought vote for all SP nominees including his son and former UP CM Akhilesh Yadav. “Respect my feelings and make Akhilesh win with a huge margin and make the Samajwadi Party strong,” he said.

Yadav said that people want the problem of poverty and unemployment to be resolved, and the SP’s policies on these issues are very clear. He appealed to the people to ensure the victory of Akhilesh Yadav, promising that his party will fulfill the aspirations of the people.

"The eyes of other countries of the world, including the United States, are on the Samajwadi Party in these elections and now the people of India will decide. But one thing is clear that your hopes will be fulfilled by the Samajwadi Party," Mulayam Singh said.

The senior Yadav expressed his gratitude to the huge crowd gathered at the rally ground. He emphasised that the farmers, youth, and businessmen are their priorities as they will together strengthen the State and only then the country will prosper.

"It is the policy of the Samajwadi Party that our farmers should be given priority, arrangement of fertilisers and seeds should be made and they be provided with the means of irrigation which will increase the yield. If the yield increases, the condition of the farmer will improve,” the Mainpuri MP explained.

“If you give profit to the trader, then he will buy the farmer's crop at a good price and that will benefit the latter,” added Yadav, asserting that his party will provide security to the traders and will extend facilities to them to ensure the same.

He further claimed that jobs will be provided to the educated youth as it is essential for running their families.

Before beginning his speech, the SP chief touched his father’s feet and took his blessings. Akhilesh Yadav thanked his father for blessing him and the SP workers, and said that his presence has made the program “splendid”. "This is the place where Netaji studied, taught, participated in wrestling, learnt politics and took the party to a new level. Now, this is our responsibility to maintain it," exclaimed Akhilesh.

Mulayam Singh, aged 82, who was addressing an election meeting after a long gap, appeared in full swing as he left no stone unturned to attack the Bharatiya Janata Party (BJP). However, it appeared that Yadav's old age was taking a toll of his political fervour, as was evident in his trembling voice and laboured breathing throughout his 10-minute long speech.

During his address, the senior Yadav even forgot to appeal for Akhilesh’s victory, and was about to end his speech. It was Dharmendra Yadav, standing close to Mulayam, who reminded him of the same by handing over a slip. It was only after Dharmendra Yadav whispered something in Mulayam's ears, that the latter smiled and made an appeal to make all SP nominees win, and also appealed to the voters to “respect his feelings” and make Akhilesh win with a huge margin.

In his last election rally held in Mainpuri in 2019, Mulayam Singh had appealed to make him "win from here for the last time.” The Mainpuri voter seemed to also respect his wish and elected him as the MP.

The Yadav family has a long-standing relationship with the people of Mainpuri. In the last 29 years, it was only in 2002 that the Karhal seat slipped out of the hands of the SP.