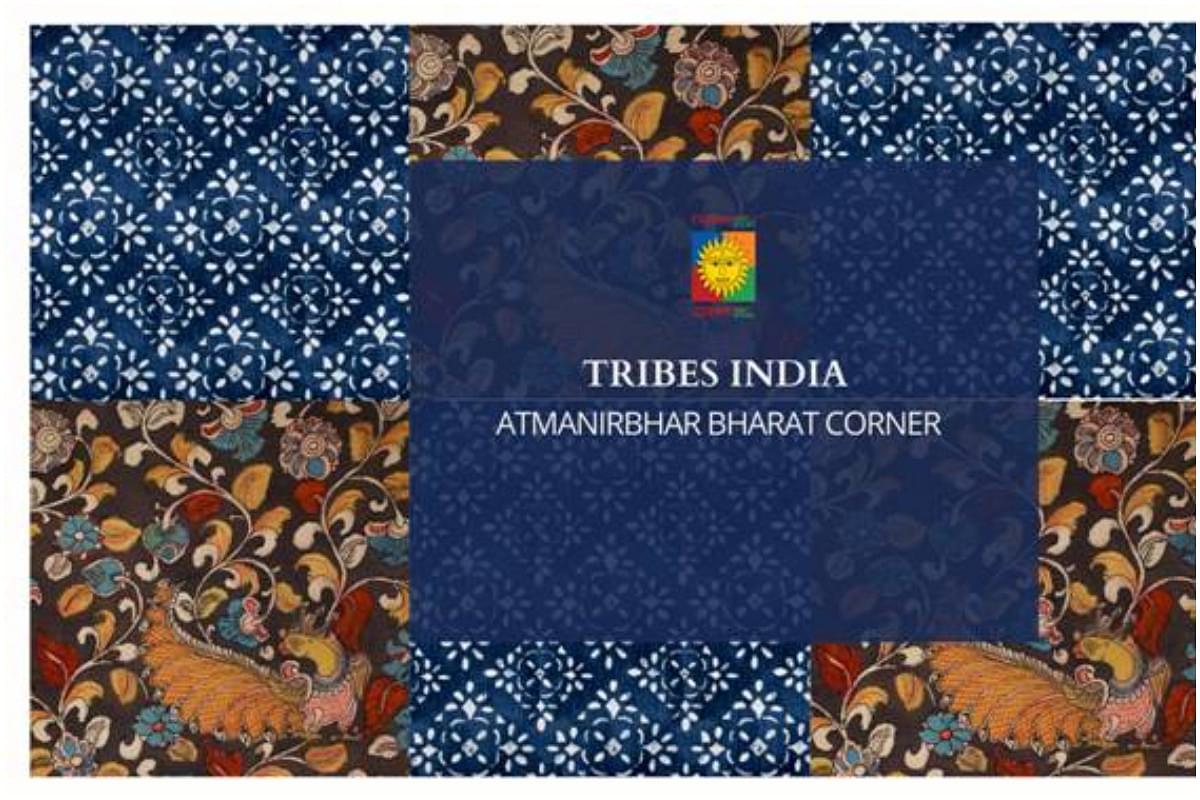 Tribal art at the Atma Nirbhar corner in Thailand.

As India moves ahead with its strategy for India@75 and focuses on converting development into a mass movement, TRIFED is working with its roots in ground realities and emphasising the welfare of both design and implementation.

With the focus on “Vocal for Local” and building an “Atmanirbhar Bharat”, TRIFED is undertaking several activities, while re-dedicating its efforts towards tribal empowerment.

TRIFED has been actively collaborating with several ministries such as Ministry of Culture, Department of Promotion of Industry and Internal Trade (DPIIT), Ministry of Commerce, India Posts, Ministry of Tourism and Office of the Prime Minister to take up the cause of promotion of GI Tag products along with tribal products and transform them into a brand, symbolising empowerment of tribal artisans.

One such collaboration is with the Ministry of External Affairs. TRIFED is setting up an Atmanirbhar Bharat corner in 75 Indian Missions/Embassies across the world in the next 90 days.

The first Atma Nirbhar Bharat corner has been successfully inaugurated at the Indian Embassy in Bangkok, Thailand, on the occasion of Independence Day, by Ambassador Suchitra Durai and Retd Ambassador R Swaminathan.

The corner will be an exclusive space to promote GI tagged tribal art and craft products besides natural and organic products. Catalogues and brochures that showcase the richness and variety of tribal products have also been shared with the Missions and embassies.

TRIFED is in the process of dispatching tribal products for the corner in each of these missions.

Additionally, it will also be establishing Atma Nirbhar corners in 75 embassies of foreign countries set up in India.

It must be mentioned that earlier, as part of celebrations for International Yoga Day, the Consulate General of India in New York had also organised a day-long event to showcase Yoga, holistic health, Ayurveda and wellness at New York’s Times Square.

Attended by over 3,000 people, the event at the iconic location in New York was very successful.

A particular attraction was the stalls on display which showcased unique natural tribal products including immunity boosters, and Ayurvedic products.

The stalls also saw a great amount of footfall and a lot of interest was expressed in knowing about the uniqueness of Indian tribes and tribal products.

A consignment worth about Rs 8.5 lakh of tribal products had been ordered by India Consulate New York for the event.

Earlier, in February 2021, keeping in line with the Prime Minister’s vision for Vocal for Local and a self-reliant India, and introduction of the rich tribal heritage to international audiences, a Tribes India Conclave had been organised in association with the Ministry of External Affairs, Government of India at the Tribes India Aadi Mahotsav.

The event, which was well-received, was attended by over 120 diplomats from more than 30 foreign missions in India besides senior officials from the Ministry of External Affairs.

There were delegates from international organisations such as UNHCR and UNDP as well. India has a rich legacy of indigenous products, be it handicrafts, handlooms, and other produce.

As the national nodal agency, TRIFED has been working extensively to help market and promote the indigenous products that tribal groups across the country have been producing for centuries.

With this promotional boost, it is hoped that these unique products will get a larger market and the larger vision of “Vocal for Local, and "Buy Tribal” can be achieved which will be truly transformational in the areas of Sustainable Income generation and Employment of tribal people in the country.