Taliban Shuts Schools For Afghan Girls Above Grade 6 In Accordance With 'Islamic Law', Says Quran Is Source Of All The Sciences In The World 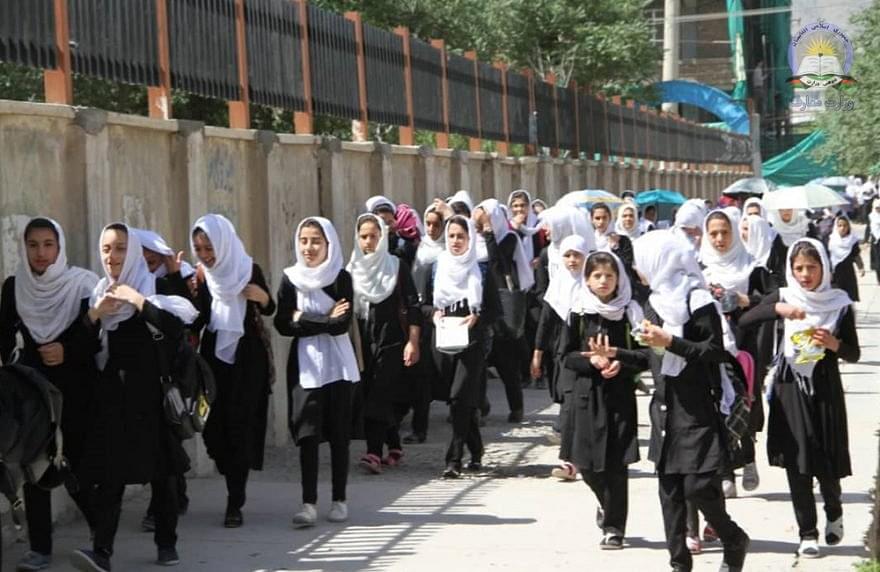 The Ministry of Education under the Taliban regime in Afghanistan announced the start of the 1401 solar school year on Wednesday (Mar 23).

A ceremony to mark the occasion was held at the Amani High School in Kabul. Officials from the Islamic Emirate of Afghanistan, the Ministry of Education, and several students attended the event.

"The Islamic Emirate of Afghanistan is most aware of the value of science and knowledge, but education should be standard and in accordance with Islamic and Afghan values." Mawlawi Noor al-Haq, Deputy Director-General of the Department of Foreign Affairs, said while speaking at the event.

"The curriculum of the previous government was made by foreigners and contributed by individuals and experts who were in favor of the United States and loyal to that country. Not for the benefit of Afghanistan and its generations." Mawlawi Noor al-Haq added.

Mawlawi Saeed Ahmad Shahidkhel, Deputy Minister of Human Resource and Administration, said that the great Qur'an is the first and largest source of all the sciences in the world.

Earlier this week, the country's Ministry of Education had announced that schools for women from the sixth grade will be closed until further notice.

Mawlawi Aziz Ahmad Ryan, director of publications and spokesman for the Ministry of Education, said that decision was made under the guidance of the leadership of the Islamic Emirate of Afghanistan.

He added that decision was made in accordance with "Islamic law and Afghan culture and traditions".

While schools reopened in September last year for grades seven through 12 after the Taliban regime stormed back to power in Afghanistan, female students were disallowed from attending. The Taliban then released an update claiming that girls could return to school in March.

"The leadership hasn't decided when or how they will allow girls to return to school," a Taliban spokesperson said. In urban areas, such as the capital city of Kabul, school is mostly still in session at the grade and university levels, but in the rural areas, sending girls to schools is still taboo, the spokesperson informed the media.

UN Secretary-General Antonio Guterres on Wednesday regretted the Taliban's announcement suspending education for young girls in Afghanistan, saying it is "deeply damaging" for the country.

In a statement, Guterres urged the de facto authorities to open schools for all students without any further delay.

"I deeply regret today's announcement by Taliban authorities in Afghanistan that girls' education from the sixth grade has been suspended until further notice," the UN chief said.

The United Nations Assistance Mission in Afghanistan (UNAMA) said in a tweet that it deplores the announcement by the Taliban that they are further extending their indefinite ban on female students above the 6th grade being permitted to return to school.

The UN chief said that the start of the new school year was anticipated by all students, girls and boys, and parents and families.