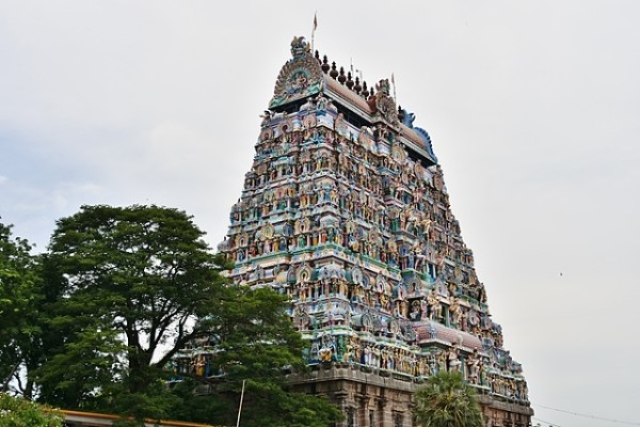 The Tamil Nadu Hindu Religious and Charitable Endowments (HR&CE) Department has asked the authorities of the Meenakshi Sundareswarar Temple near Pattabhiram, a Chennai suburb, to stop the temple’s consecration (kumbhabhishekam).

This has led to a hue and cry being raised by devotees and temple activists.

Archakas or priests of the temple and the Tamil Nadu Archakas Association have protested against the sudden decision and have questioned why the temple was allowed to go ahead and make preparations before the department cried a halt.

In a video that is doing the rounds on social media, the temple priests said they had been preparing for the consecration of the temple at Soranjeri village, about 30 km from Chennai, for over a month when the executive officer ordered a halt.

The priests were also ordered out of the temple to ensure that the department's orders were not disobeyed.

A temple activist said the whole issue has cropped up since there is no proper framework in place for a temple to get permission for consecration.

“Usually, temple authorities take oral permission from the authorities and begin work. Once the works, especially renovation, is complete, consecration is done,” the activist, who did not wish to be identified, told Swarajya.

"All these years, consecration of temples have been done this way only," the activist said.

In the case of the Soranjeri temple, activists say one of the village members had taken up the issue with the authorities, who ordered a halt.

“There was a change in the village leadership a few weeks ago. Earlier, it was a Hindu who offered all support. But the current person belongs to a different religion,” the activist said, indicating that the village head could have played spoilsport.

“Since temples face so many hurdles to conduct consecration, we are demanding that a proper framework be put in place,” the activist said.

The problem for the temples in Tamil Nadu is that they have to seek permission from the HR&CE Department first to renovate them and then conduct the consecration.

Hundreds of temples in Tamil Nadu await the HR&CE clearance to renovate and consecrate.

To get the HR&CE Department’s permission, the temple authorities have to make a power-point presentation on the funds that are required and resources available to raise the funds, besides seeking a technical opinion from the chief sthapathi.

In addition, temple officials face trouble from avaricious department officials, who demand a “cut” from the fund allocated for the renovation and consecration.

In an interview to Swarajya in November 2018, Bharatiya Janata Party (BJP) national secretary, H Raja, alleged that at a temple in Tamil Nadu’s Thanjavur district, when the Sivachariar (a priest in a Shiva temple) approached a HR&CE official for consecration, the latter sought a 25 per cent “cut” for himself from the funds kept for the event.

Raja then said that in many cases, HR&CE officials were not giving permission for the consecration and the department’s act was a violation of Article 25 of the Constitution.

Article 25 says that the HR&CE Department can intervene only with the secular aspects of the administration of the temple.

Temple activists say that for these reasons, they want a proper framework in place.

An email sent to the Tamil Nadu HR&CE Commissioner seeking the department’s comment on the issue, particularly the stoppage of the temple consecration, has not evoked any response until this report went online.

Activists said the HR&CE action was unwarranted since the Soranjeri temple was one where only one pooja was held per day and the authorities should have let the event be held.

Though a tug-of-war is on between the temple priests and the HR&CE Department, activists are confident that the consecration will be performed soon.