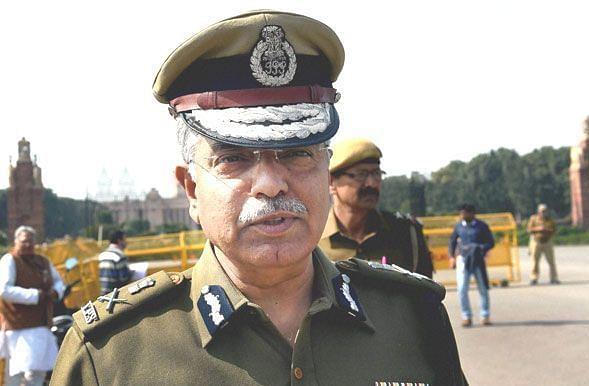 Earlier this week, large scale violence hit parts of north east Delhi. Stone pelting, arson, killings, looting of houses and shops have been reported in several areas. A deputy commissioner of police suffered critical injuries, a Delhi Police head constable lost his life on duty. The violence spiralled out of control. An Intelligence Bureau officer was murdered and his body found in a drain.

So far, 38 people have lost their lives and many are injured. Disturbing details about mobs and their preparations have emerged from many parts of the riot-hit north east Delhi, especially Chand Bagh, where Intelligence Bureau officer Ankit Sharma lived and was killed by a mob.

He said: "...Many trans yamuna areas are tinderboxes. Cops there have an unenviable task while quelling communal conflagrations. Jai Hind. (sic)"

Deeply saddened on the martyrdom of HC Rattan Lal while protecting Delhi. My heartfelt condolences to his family.
I wish speedy recovery to the injured.
Many trans yamuna areas are tinderboxes. Cops there have an unenviable task while quelling communal conflagrations. Jai Hind.

He added that many “trans-Yamuna areas”, another term for north eastern parts of the national capital Delhi, are “tinderboxes”.

“Cops there have an unenviable task wile quelling communal conflagrations (sic),” Bassi, who served as the chief of Delhi Police between 2013 and 2016, said.

Many social media users appeared to agree with Bassi and pointed to the disturbing reports that have been coming out of the area.

There are disturbing details arising from the riot-hit district on the material and people involved in the riot. On Thursday, it was reported that the cops have been left "startled" to find that "many people have died due to bullet injuries."

This report which looks at the transferring of the case to the Crime Branch and the forming of two special investigation teams (SITs), says,

Rioters had no fear of the police as they opened fire on innocent people in broad daylight. The causes of 22 deaths have been ascertained. As many as 10 people were shot dead. Many of the over 200 injured have gunshot injuries.

The presence of guns in the riots got publicly registered first when Shahrukh, a rioter, pointed a gun at a cop.

India Today reports that the Delhi police "have got many videos and CCTV footages in which rioters can be seen using pistols".

This report in the Times of India says that multiple operations are on to nab Shahrukh, who was seen pointing a gun at a cop and opening multiple rounds of fire at the site during clashes in north east Delhi.

It also mentions that his mother and father have cases under the Narcotic Drugs and Psychotropic Substances Act 1985 registered against them.

On 26 February, it was reported that National Security Adviser Ajit Doval reached Seelampur for reviews and briefing on the situation. The late night visit came after Home Minister Amit Shah's third meeting with Delhi Police and his ministry officials happened, even as areas such as Chand Bagh, Jaffrabad, Maujpur, Bhajanpura, Gokulpuri, and others were struggling to see the rioting recede.

On his next visit to Maujpur area in the district, Doval was later seen interacting with the locals over a confidence building measure, reviewing the situation, and giving the locals a patient ear. The security establishment sent one of the top men on ground.

In December 2016, it was reported that raids conducted by the National Investigation Agency (NIA) and Uttar Pradesh Police in a joint operation helped recover huge quantities of "explosives and material to make bombs". The raids were conducted on the basis of information regarding an Islamic State-inspired module.

One of the locations where raids were conducted under this joint operation was Seelampur in north east Delhi.

Among the material recovered were as many as 12 pistols, 150 rounds of ammunition, 120 alarm clocks, 100 mobile phones, 135 sim cards and nearly 25 kilos of potassium nitrate, potassium chlorate, sulphur paste and sugar — chemical ingredients used in making bombs. The alarm clocks, mobile phones and sim cards were possibly to be used in making remote controlled and time bombs.

This report quotes then Inspector General NIA, Alok Mittal, as saying at a press conference in Delhi. “They weren’t just making bombs, they were making a large number of bombs.”

Another report quotes him as saying: "the level of preparation suggests their aim was to carry out explosions by remote control blasts and fidayeen attacks. This is a new IS-inspired module. They were in touch with a foreign agent. Their identities are yet to be established."

The same report quotes him as saying that the leader of the module was  identified as "Mufti Sohail, a Delhi-resident and native of Amroha (in Uttar Pradesh)".

More details emerge on the accused in Ankit Sharma murder case, and AAP leader Tahir Hussain as a key figure in the riots, and his controversial house. It seems that areas in the district will keep investigation agencies and the security establishment busy in the coming months.