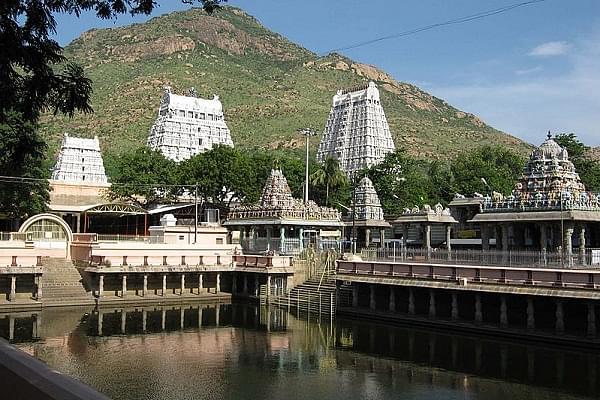 Representative image of a Shiva temple in Tiruvannamalai, Tamil Nadu (Pic by Govind Swamy via Wikipedia)

On Monday (2 March), the Tamil Nadu government moved the Madras High Court to vacate a stay on regularising “non-objectionable encroachments” of temple lands in the State.

The State government has coined a new word "unwanted lands" for the encroached properties, though.

In November last year, the High Court had stayed the regularisation by the State government through a government order on 30 August.

Advocate-General Vijay Narayan told a bench comprising Justices M M Sundresh and Krishnan Ramasamy that it had carried out a survey which revealed that 19,717 “poor families” were living in 13,156 huts and 6,561 tiled houses on temple lands in Tiruvarur district of the State.

The Advocate-General said there were instances where lands in an entire village belonged to the temples and added that the State government would pay “handsome” amounts as compensation to temples for regularising these encroachments.

The Hindu Religious and Charitable Endowments (HRCE) Department Commissioner would take the decision on regularising these lands on a case-by-case basis and not issue any blanket order.

Narayan told the court that the HRCE Department had been “fiercely independent” and had in the past rejected acquisition of temple lands for Tangedco, which supervises power generation and distribution in the State, and construction of hospitals by government.

The Advocate-General said the HRCE Department had in the past taken decisions in the “best interests of the temple(s)”.

However, the Tamil Nadu government’s plea has drawn criticism, especially from the Temple Worshippers Society, which had moved the High Court to stay the 30 August order.

“In the past, fraudsters had sold temple lands and then called for objections (if any) from devotees. Tamil Nadu government should be booted out of temples,” reacted Temple Worshippers Society president and advocate T R Ramesh on Twitter against the government’s plea to lift the stay.

In November last year, ruling on a miscellaneous petition filed by Ramesh to stay the state government order, a two-judge bench of the High Court comprising Justices M Sathyanarayanan and M Seshasayee said that the government order cannot be implemented until details of encroachment of temple lands were collected.

In particular, the court stayed the second part of the 30 August government order on regularising encroachment of temple lands. The order cannot be implemented until a biometric evaluation of all temple lands across the state was undertaken and completed, the judges said.

Ramesh has also filed a writ petition challenging the 30 August order. Besides, another person, A Radhakrishnan of Salem, has also moved the court against the order to give away ownership of temple lands worth hundreds of crores of rupees to squatters.

The judges observed that attempts to regularise encroachment of temple lands and giving permission to such acts would deprive temples of their properties.

Then, the bench said that any act that led to loss of temple properties was against the provisions of the HRCE Act. The High Court had also sought more details of temple lands in the State.

The judges, during the hearings, have wondered how the State government will implement its order without details of the encroachments on the 44,000-odd temple lands in Tamil Nadu.

The judges have also sought to know if the State government would fix a price for all the temple lands that it plans to acquire before handing them over to the encroachers — as per the Right to Fair Compensation and Transparency in the Land Acquisition, Rehabilitation and Resettlement Act, 2013.

The Act lays down clear guidelines, procedures and rules for providing compensation, rehabilitation, and resettlement for government-acquired lands. The judges have also expressed disappointment on the sort of signal the State was sending to squatters of temple lands.

The State government has tried to justify its order claiming that it wanted to provide lands to “eligible” poor families residing on temple lands.

In October 2018, the High Court asked the HRCE Department to furnish details of lands that are currently missing from temple documents and records.

The Department reverted to the High Court saying that it had recovered hardly 1,000 grounds and some 3,000 square feet of land.

Temples in Tamil Nadu own nearly six lakh acres of land and three lakh square feet of properties. A vast majority of these properties have been grabbed and temples are now left only with lands within their premises.

Temple devotees and worshippers in Tamil Nadu are aggrieved that ever since the Dravidian parties — Dravida Munnetra Kazhagam (DMK) and AIADMK — came to power in 1967, temples, which can earn Rs 7,000 crore revenue annually, have been systematically looted.