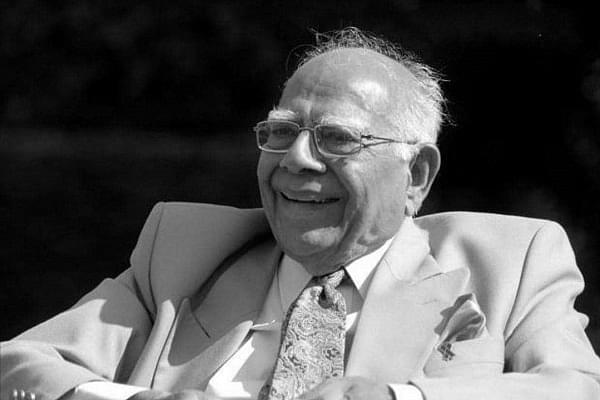 Veteran lawyer and former union law minister Ram Jethmalani passed away at his residence in New Delhi at the age of 95 on Sunday morning (8 September).

The controversial celebrity lawyer built a formidable reputation by appearing in many high profile criminal cases.

Jethmalani was born on 14 September 1923, in Shikarpur, Sindh in the Sindh division of the then Bombay Presidency, now part of Pakistan. He completed his LLB at the age of 17 and started practising law in his hometown until the partition of India.

After partition, he shifted to Bombay to continue legal profession. He shot to national limelight with his appearance in the sensational  K M Nanavati versus State of Maharashtra case in 1959. He defended BJP veteran Lal Krishna Advani in the Hawala scam and appeared for Arvind Kejriwal in a defamation case filed by Arun Jaitley.

One of India's top criminal lawyers, with years of experience at the bar Jethmalani's crowning moment came when he managed, against odds, to get one of the three persons accused of assassinating Prime Minister Indira Gandhi acquitted.

Jethmalani also defended the controversial stock broker Harshad Mehta, accused in the Bombay Stock Exchange securities scandal. And, at a dramatic press conference that forever dented the reputation of  Prime Minister P V Narasimha Rao, he alleged that Mehta had paid Rs 10 million as bribe in cash to Rao.

A maverick personality with a fiercely individualistic streak, Jethmalani had a long but chequered association with the BJP. He was close associate of party stalwarts Atal Behari Vajpayee and Lal Krishna Advani but later had a bitter fallout. He later reconciled with the leadership but the relationship tuned acrimonious again.

Jethamalani was elected to Lok Sabha from Mumbai North West seat twice (1977 and 1980); first as a Janata Party MP and later as a BJP MP. Jethmalani later became a member of the Rajya Sabha in 1988.

Jethmalani first became the Union Minister of Law, Justice and Company Affairs in 1996 in the short-lived Atal Bihari Vajpayee government. During the second tenure of Vajpayee, he was vested with the portfolio of Union Minister of Urban Affairs and Employment.

When Vajpayee assumed power for third term, Jethmalani was made the Union Minister for Law, Justice & Company Affairs.

It was widely believed that Jethmalani never enjoyed the confidence of Prime Minister Vajpayee but was inducted into the Cabinet on Home Minister L K Advani's insistence.

Jethmalani as the law minister often clashed with the then attorney general Soli Sorabjee, who enjoyed the trust of Vajpayee. Jethmalani felt that Sorabajee was often  exceeding his brief and flaunting his political clout. There were exchanges of rude letters and a series of accusations on both sides.

Jethmalani antagonised the legal fraternity with his brash handling of the lawyer's strike that year and was even expelled from the Bar Association.

Vajpayee ordered Jethamalani to resign after a public spat with then Chief Justice A S Anan. The CJI took serious exception to not being consulted on the appointment of MRTP commission head.

Jethmalani had felt that the judiciary was poaching on the executive's turf. The exchange of letters turned acrimonious and culminated in Anand making a formal complaint to Vajpayee.

His son Mahesh Jethmalani is also a well-known lawyer.

His last rites will be performed in the evening at the Lodhi road crematorium in Delhi.