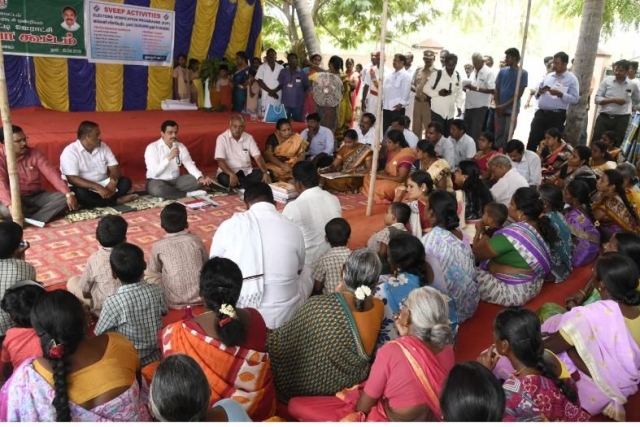 Panchayat posts are being auctioned by villagers wanting to maintain their temples and surroundings.

Villages in Tamil Nadu have probably found the best way to take care of their own interests; they have taken to auctioning the posts of panchayat members for which elections are scheduled to be held on 27 and 30 December.

Media reports say that panchayat president and other important posts are being auctioned at a price between Rs 20 to 50 lakh.

Most of these villages seem to be auctioning the panchayat posts for the purpose of maintaining or carrying out repairs to their temples. A part of the money raised through such auctions will also go towards social welfare, claim village elders auctioning the seats.

At least three such auctions have taken place in the state. In the first instance, the panchayat president’s and vice-president’s posts in Nadukuppam village in Cuddalore district, with 1,900 votes, have been auctioned.

The vice-president’s post has been bagged by Desiya Murpokku Dravidar Kazhagam (DMDK) member, A Murugan, who made the highest bid of Rs 15 lakh.

WhatsApp videos reportedly doing the rounds on social media show the village elders reading out the resolution to unanimously elect Sakthivel and Murugan if both of them make the payment by 15 December.

In turn, the elders have promised that no candidate will file nominations against them. Nadukuppan village will utilise the money earned from auctioning the panchayat posts to renovate the local temple and for other developmental projects.

Sakthivel has denied outbidding others for the post though, saying that it is a plot hatched by the opposition. He has also filed a complaint with the local police station seeking action against those spreading ‘false’ information against him.

The second instance of a panchayat post being auctioned has come from Pannaikulam village in Dharmapuri district. The president’s post was auctioned for Rs 25.4 lakh.

The third instance of the panchayat chief’s post going under the hammer has come from Thirumangalakottai (East) village in Thanjavur district.

A person called Suresh has made the top bid for the president’s post at Rs 32 lakh and even paid the advance. He has been given time till 15 December to pay the rest of the amount.

A similar incident of a ward-member post being auctioned for rupees one lakh has been reported from Arasalur village in Trichy district.

Media reports say that village panchayat posts are up for the highest bidders in the delta districts of Thanjavur, Pudukottai and Trichy. District collectors have reacted to the reports saying that they have asked their officials to remain on vigil to prevent such auctions.

Some officials have reportedly said that they cannot act until they get complaints, while others say that officials will not be able to do anything in case a candidate is elected unopposed.

Village panchayats are auctioning panchayat posts for temple maintenance since the Hindu Religious and Charitable Endowments (HR&CE) Department has been tardy in maintaining most of the 44,121 temples that are under its administration.

The state Election Commission officials and others have been petitioned on these auctions but so far, there has been no action from their side.

Interestingly, elections to local panchayats have been pending since 2016.

Following a Supreme Court order, elections to panchayats in nine districts will not be held as some of them have been bifurcated and delimitation exercises have not been carried out.

Elections are currently being held only for rural local bodies. The filing of nominations began on 9 December and will end on 16 December. The election process is expected to be completed by 4 January, after counting of the votes is done on 2 January.