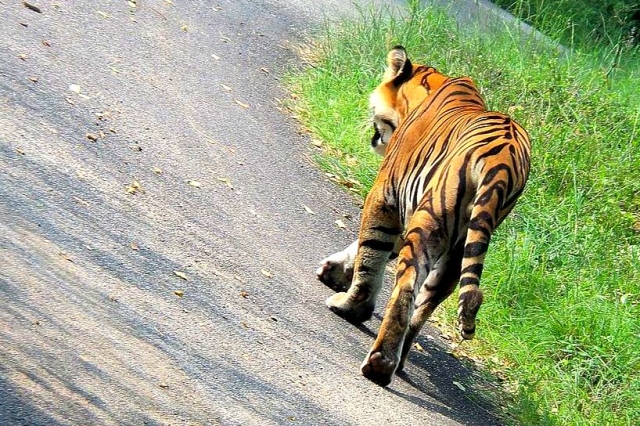 The tigers at the Bandipur reserve may be thanking their stars yet again as the central government refused to give in to Kerala’s demand to lift the night ban on the stretch of road that passes through the tiger reserve.

Much to the disappointment of Kerala, Chief Minister Pinarayi Vijayan’s proposal for an elevated corridor passing through the reason was turned down by the union government on Thursday(26 September).

In a letter to Vijayan, Union Minister for Environment, Forest and Climate Prakash Javadekar informed the state that status quo will be maintained as was recommended by the committee of secretaries that had discussed the issue at length.

The letter also added that the ministry has also initiated ‘approporiate action through the National Tiger Conservation Authority’ to work on a file an affidavit about increasing the width and features of the alternative roads in order to enable the complete closure of the one through the reserve forest.

But the contents of the letter have not gone down well with organisations in Wayanad. The NH- 766 transport protection action committee which has been on an ‘indefinite hunger strike’ since Wednesday has found support from local political and religious organisations who showed ‘solidarity’ to the protestors.

And the latest reiteration regarding the permanent closure of NH 212 as suggested by the Supreme Court in the Union ministers letter has led to a call for a day long hartal in Wayanad on October 5 by the district United Democratic Front(UDF).

This despite having an alternate route which only requires one to travel an extra 30 kilometres via the Kutti-Gonikoppa road. But this according to the UDF is ‘not an alternative to NH 766’ and wants the Kerala state government to file a fresh affidavit stating the same.

One of the premier tiger reserves in the country, Bandipur was once the private hunting reserve for the Maharaja of Mysore. National Highway 766 (earlier 212) passes through this reserve forest and the reserve park and its inhabitants have paid quite a heavy price for letting humans have their way quite literally.

It was only after the ban was imposed that there was a reduction in the death of wild animals in the stretch. As per BTR statistics, the pre-ban death count of wildlife between 2004-2009 was 93, while the count has drastically come down to 34 between 2010 and 2018, as reported.

But this is being disregarded as against the ‘inconvenience’ caused to those travelling extra thirty kilometres on the alternate route, which is less than the distance most Bangaloreans travel to reach the airport.

But representatives from Rahul Gandhi’s constituency are echoing his sentiments and calling it a major ‘hurdle’ in connectivity that will “lead to a collapse of the economy of the hill district” of Wayanad.