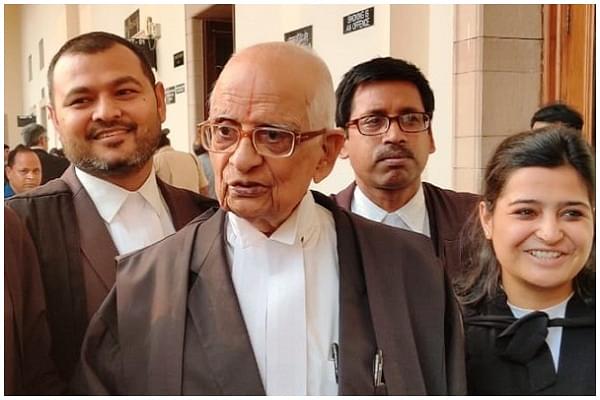 A couple of days ago Rajiv Dhavan the lead counsel for the Muslim side in Ram Mandir-Babri Masjid case went viral after he tore up documents and maps indicating the birthplace of Lord Ram while arguing in the Supreme Court.

This led to widespread condemnation against Dhavan and demands that action be taken against him. Amidst all this din the name of one important figure did not get due attention. He is 92-year-old K Parasaran who is leading the legal fight of Hindus to construct Ram Mandir.

Parasaran - a veteran lawyer and a legend at the bar served as the lead counsel for the Hindu side and made various important arguments along the duration of the hearing.

The Illustrious Career Of K Parasaran

K Parasaran is a senior Supreme Court advocate who in a legal career spanning over six decades, served as the Attorney General of India from 1983 to 1989. He had earlier served as the Advocate-General of Tamil Nadu in 1976.

He was awarded the Padma Bhushan and Padma Vibhushan in 2003 and 2011. He was nominated to the Rajya Sabha by the Indian President in 2012 for a period of six years.

His knowledge of the Indian Constitution and ancient dharma has been praised by various senior lawyers.

This was on display during the recent Sabarimala trial in the Supreme Court, wherein Parasaran had argued in favour of upholding the traditions of the temple.

During the trial Parasaran while appearing for the Nair Service Society had argued that the celibate nature of the deity and not misogyny was the basis for the practice barring entry of women. He had added that Lord Ayyappa’s Naishtika Brahmachari avatar is protected by the constitution.

During his arguments Parasaran had stressed that women are not protected under Article 25(2)(b) as it only pertains to caste discrimination. He said that the state only has the right to frame laws to open temples for all classes and sections of Hindus, which does not include women in its scope.

He had also submitted that one must not proceed with the presumption that, “the ancients knew nothing and that we know better in all aspects of life”.

His most important engagement in recent days has been to serve as the lead counsel for the Hindu side in the Ram Mandir-Babri Masjid case, whose arguments were recently concluded in the Supreme Court.

As reported, his dedication to the case can be inferred by the fact that every day he worked on every aspect of the case before the hearing began and well into the evening after it concluded.

Parasaran’s legal associates were awed by his energy and extensive memory, backed by his comprehensive but easy to understand research. Unlike Dhavan who rampaged in the court on the last day of the hearing, not once did Parasaran lose his cool during the duration of the case.

During the course of the hearing Parasaran argued that a historic wrong was committed by Babar 433 years ago when he constructed a Mosque at Lord Ram’s birthplace and it needed to corrected.

One of the most notable arguments by Parasaran in this case was, “Muslims can pray in any other mosque in Ayodhya. There are 55-60 mosques in Ayodhya alone. But, for Hindus this is the birth place of Lord Ram, which we cannot change”.

Another notable exchange during the proceedings was Parasaran asserting, “I will say once a temple always a temple”, in response to the Muslim side’s argument of “once a mosque, always a mosque”.

Despite intense rivalries in the courtroom, Parasaran did not shy away from being gracious with his opponents. After the conclusion of the hearing, he waited for 15 minutes for Rajeev Dhavan so that he could greet him.

Finally, it was Parasaran’s spiritual relationship with Lord Ram which powered him throughout the course of this case. And his blend of spirituality and legal knowledge is leading the the quest of Hindus to finally reclaim the Ram Janmabhoomi.