Determined To Uphold The Status Quo Of Taiwan, Says US Defence Secretary At Shangri-La Dialogue 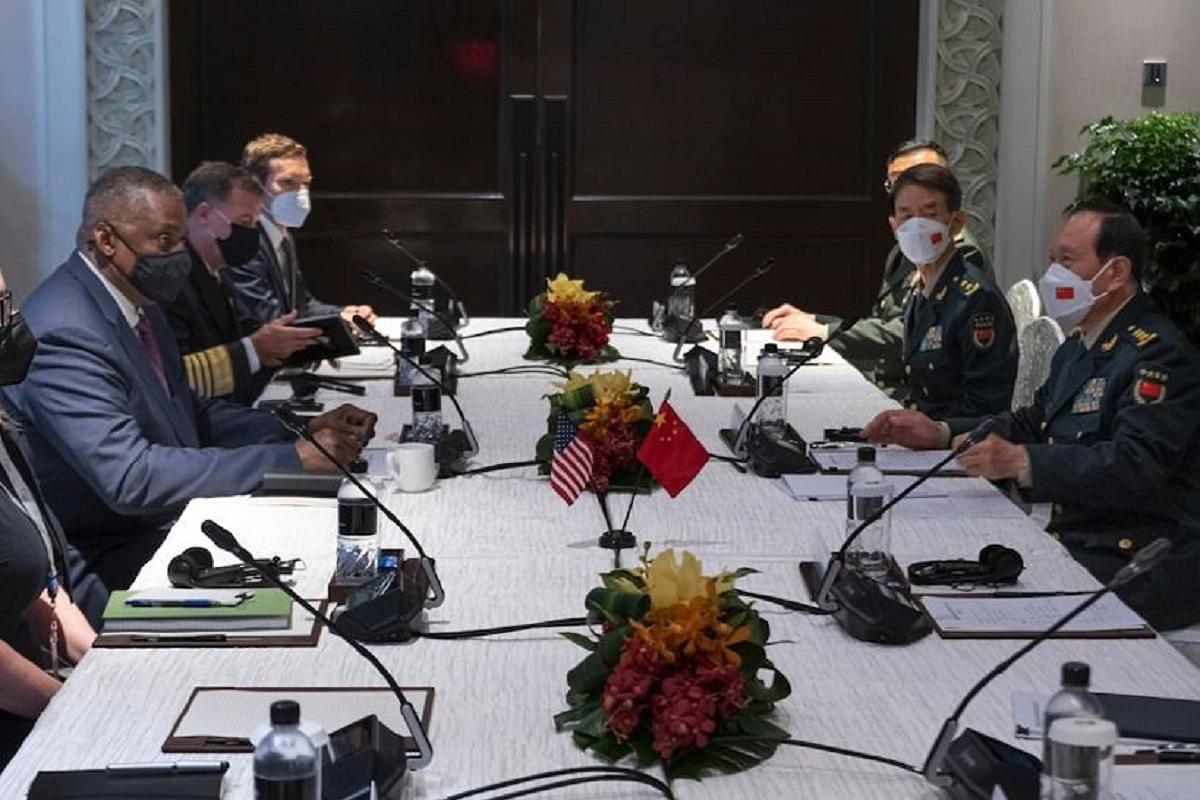 US Defence Secretary Lloyd Austin has vowed to beef up Taiwan's self defence capabilities, in light of Beijing's provocative destabilising moves.

The American Defence Secretary was speaking at Shangri-La Dialogue in Singapore.

“We will continue to fulfill our commitments under the Taiwan Relations Act, and that includes assisting Taiwan and maintaining a sufficient self-defense capability. And that means maintaining our own capacity to resist any use of force, or other forms of coercion that would jeopardize the security or the social or economic system of the people of Taiwan," he said.

"We’ve witnessed a steady increase in provocative and destabilizing military activity near Taiwan. And that includes PLA aircraft flying near Taiwan in record numbers in recent months, and nearly on a daily basis," he added.

This speech was made by him a day after he met China's Defence Minister Wei Fenghe.

In that meeting, Wei told Austin that the Chinese military “will not hesitate to fight if anyone dares secedes Taiwan” from China.

Austin, on his part, tried to clarify that the US doesn't support an independent Taiwan.

Washington's long standing policy is that neither side should unilaterally try to change the status of Taiwan. Although, US legislation also allows for supporting the island’s defences and possibly intervening if war breaks out.

“We categorically oppose any unilateral changes to the status quo from either side. We do not support Taiwan independence,” said Austin, quickly adding that, "the United States maintains its capacity to resist any use of force or other forms of coercion that would jeopardize the security or the social or economic system of the people of Taiwan.”

This is some sort of a clarification, after Biden's statement on Taiwan during his trip to Asia, which made several people ask if America's policy had changed.

After Biden's unusually strong comments, the American State Department had to walk back on those comments.

This speech at the Shangri-La Dialogue is Austin's attempt to reiterate what America's policy vis-a-vis Taiwan is. America has maintained a policy of strategic ambiguity on Taiwan.

During their meeting on Friday, Wei blamed Austin for damaging China's security. He told Austin that US weapons sales to Taiwan “gravely damage China’s sovereignty and security interests”.

The American Defence Secretary stated that China's increasing aggressiveness is the issue. He said that increasing PLA flights near Taiwan is part of a pattern. A pattern which entails increasing Chinese pressure on neighbours, including India, Japan and Southeast Asian countries.

In recent days, Chinese military jets have been harassing planes of American allies. The tactics include flying so close that the pilots could see each other, or making provocative, risky manoeuvres, such as releasing metallic chaff in the path of an Australian aircraft.

These “dangerous intercepts should worry us all, mistakes are especially stark in the Taiwan Strait,” said the American Defence Secretary.

Last month, when US President Biden was visiting North East Asia, Chinese and Russians sent their bombers over the seas in North East Asia. China has also, in a sustained manner, increased the number of times it violates Taiwan's air defence zone, by sending fighter jets inside Taiwanese air defence zone more frequently.

According to analysts, the risk of a conflict in East Asia has grown as the power differential between China and US has declined.

Beijing's strategic goal is to put US out of the 1st island chain and then the 2nd island chain.