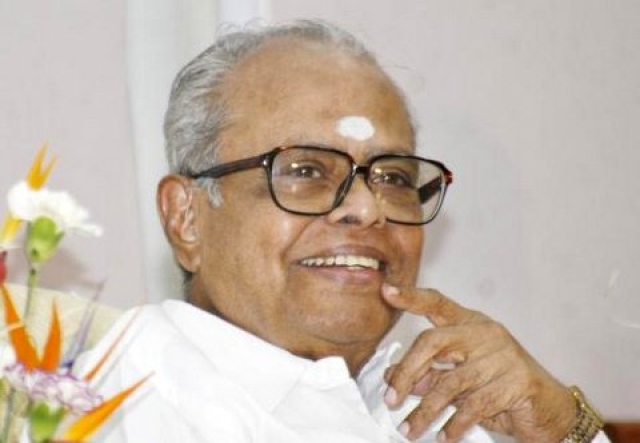 Balachander did lot more than produce celluloid masterpieces. He was not just a director – he has been an institution.

It has always been a great challenge for a regional film industry aspirant to deliver high quality work and achieve commercial success at the same time. Kailasam Balachander, a veteran South Indian film director and a doyen of the industry, who passed away a few hours back, managed to do it with remarkable consistency.

If we try to describe his creativity, two terms come immediately pop up – Subtlety and stunning mastery over depicting the middle class milieu.

In a melodramatic cinematic environment of yesterdays were everything was overstated, Balachander was superbly subtle. For long period of time  this was what conventional grammar of film making meant –  dialogues were  to be loud, emotion understood as lots of tears, and entertainment value essentially realised through a action sequence or gracefully choreographed group dance. Balachander largely accepted the broad contours of this framework but brilliantly improvised and delivered all of this in his own inimitable way. Despite his early tutelage in theatre, when he made his transition to film making he was able to provide a totally refreshing treatment.

Balachander explored complex human relationships without being crass, mushy or lewd; to name a few,  Iru Kodugal (forced estrangement between a husband and wife and their reconnection in later life) Apoorva Ragangal (father-son, romance between a twenty something and a forty something), Avargal (a woman going through a spate of relationships and breakups) or Aval Oru Thodarkathai (woman shouldering family responsibilities and managing her own emotions) or Nizhal Nijamagiradhu (deceived maid realises her moment and extracts her subtle revenge). So much so, for many Tamils the term ‘Balachander touch’ became a integral part of Tamil movie lexicon to describe any delicate moments of film making deftly handled through subtle direction.

Bringing in middle class memes where the average film goer could easily connect was another of his forte. A middle class woman (or man) could see the film characters in her own life; the happenings could well be in her own house. One could take the example of Bhama Vijayam (an old widower bringing order to his chaotic house), or Edhir Neechal (an orphan balancing and battling multiple forces sharing the proverbial ‘cupboard under the stairs’)

If you analyse his directorial style more closely, treatment wise two aspects stand out in the Balachander way:  humor and songs. Most Balachander movies have excellent comedy sequences with many of them brilliantly executed by Nagesh. He also did some purely light and highly enjoyable movies (like Anubhavi Raja Anubhavi).

On songs he placed them in movies in such a way that they were an integral part of the narration. They are never out of context or a drag. If you miss them in a movie you may need to do some figuring out! So if you are in a movie hall you never step out for a break during the three minute song sequence! One great example should suffice – Ilakkanam Marudho from Nizhal Nijamagiradhu.

Balachander did lot more than produce celluloid masterpieces. He was not just a director – he has been an institution. He identified, nurtured and grew talent. One can keep throwing names – from Kamalahasan, Rajnikant, Sujatha, Jayachitra to Prakash Raj and Vivek – all were either introduced or perfected through this institution.  AR Rahman got his first break in Roja movie produced by Balachander.

Late in his career Balachander may have lost his midas touch when it comes to movie making. But the veteran director more than made up for this by making a seamless transition to television serials. He produced some of the most memorable television serials that enthralled Tamil TV audience to this day.

Swarajya mourns the demise of this versatile genius.