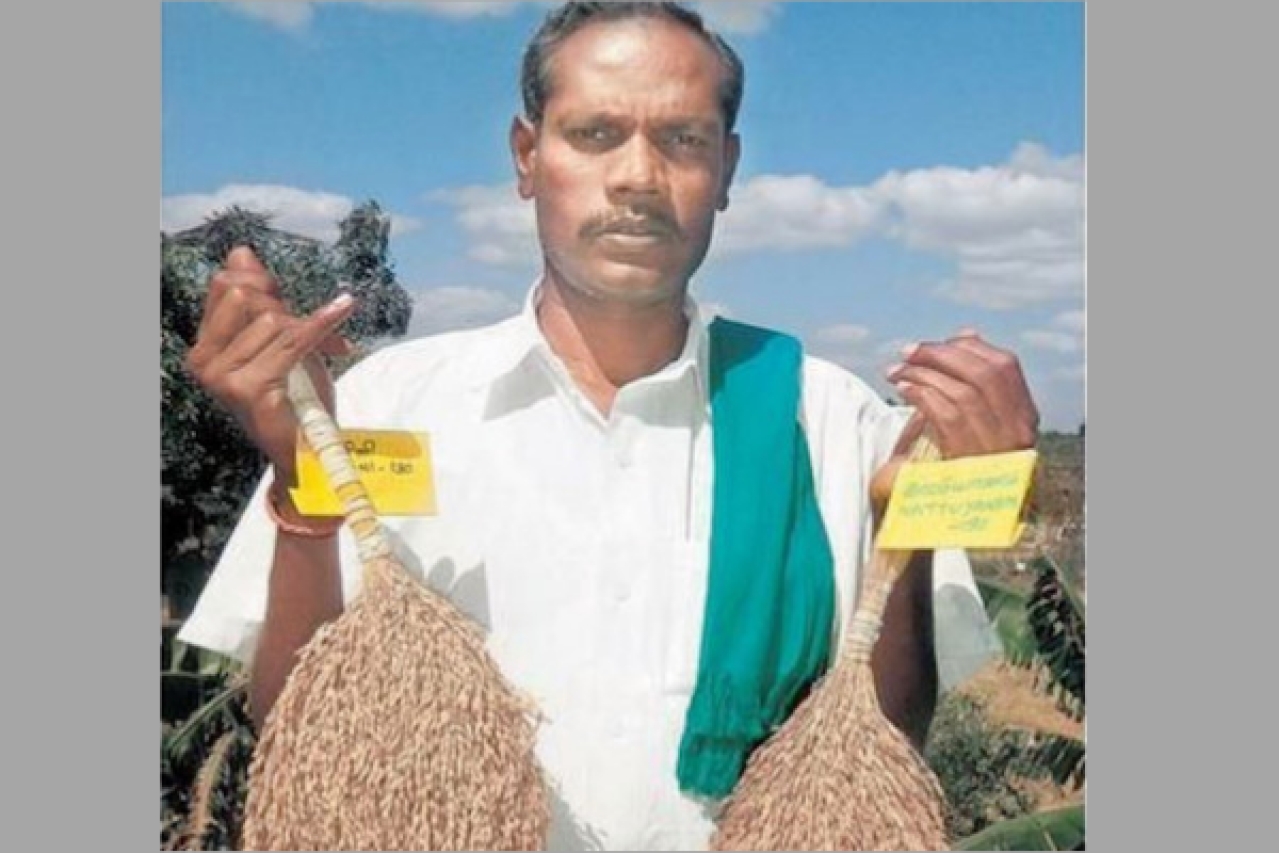 In May 2005, a paddy seed festival was organised at Adhirangam village in Tamil Nadu’s Tiruvarur district. It was organised by a native of the village, a high-school dropout who had been engaged in preserving traditional organic rice varieties in Tamil Nadu that had various health benefits.

Before the festival, the man had cultivated 15 such traditional organic varieties to multiply the paddy seeds. He had about 2 kg of the 15 varieties and made it a point to distribute it to the 300-odd farmers who attended the first festival.

While handing out the 15 traditional varieties of organic paddy seeds, the man put forth only one condition – that they double the seeds and return it to him. Within a decade, the paddy seed festival became a regular visit for farmers from across the country, and it has helped revive over 170 traditional organic paddy varieties till now.

The paddy seed festival has been held for 14 years now, but will the fifteenth be held?

It is a big question as fate has claimed the life of the Adhirangam native, popular in the country as Nel or Paddy Jayaram and as a village scientist for many. After battling cancer for over two years, he succumbed to a deadly ailment yesterday (6 December).

Born as the third child to Ramasamy and Muthulakshmi, Jayaraman studied only up to Class VIII at Kattimedu, near his village. Jayaraman began his career as an ordinary worker at a private printing press.

During that time, he became the local secretary of the Federation of Consumer Organisations Tamil Nadu and Pondicherry. Later, he also became active in Consumer, Research, Education, Action, Training and Empowerment (CREATE).

His life took a turn when he got to know one of India’s top crusaders for organic farming, Dr G Nammalvar. Once Jayaraman met Nammalvar, he became Nammalvar’s ardent disciple, following him everywhere. He soon became his protege and subsequently got involved in collecting, preserving, cultivating, and reviving traditional organic paddy varieties.

During their meetings with Nammalvar, farmers usually handed him traditional organic seed varieties of paddy with a request to preserve them. Nammalvar, in turn, gave them to Jayaraman, telling him that he was handed the onerous responsibility of multiplying the seeds manifold.

A boost for Jayaraman came in the form of a non-resident Indian from his village donating him nine acres of farmland and a building for cultivation and to hold training programmes for farmers. In the space of 4-5 years, Jayaraman had developed 15 traditional varieties that he distributed to farmers at the first paddy seed festival.

Among the 170-odd native paddy varieties that Jayaraman revived were Kattu Kuthalam (which can be grown in sandy clay soil), Kadaikazhuthan (a variety grown in sandy soil and is good for making puttu), Seeraga Samba (a biryani special variety), Kattunayam (a flood-tolerant strain), Poongkar (a strain that grows on saline soil), and Mapillai Samba (a variety that gives high energy). People won’t be aware of these varieties unless you tell them their health benefits.

For example, there is particular variety of paddy that is recommended for newlyweds. Then, there is another variety that is good for pregnant women and yet another for lactating women. There are also traditional organic varieties of rice that can help tackle diabetes, asthma, and common cold.

One of the features of the paddy seed festival was that Jayaraman got Indian Administrative Service officials, agriculture experts, and grower representatives from other parts of the country.

On his part, Jayaraman would not only distribute traditional organic paddy varieties to farmers but also keep a record of it to ensure that farmers returned the seeds duly. And under the auspices of CREATE, Jayaraman was able to reach out to farmers in other states like Kerala, Andhra Pradesh, Telangana, Karnataka, and Odisha.

Jayaraman was the flesh and blood of the Save Our Rice campaign that was launched in 2004. As the state coordinator of the campaign, he used it to helped turn many youth farmers towards organic farming.

Jayaraman became a walking encyclopaedia to get the best information on traditional organic paddy varieties, including those that have been lost. And not for nothing did he have tens of thousands of farmers as his admirers and followers.

For his commitment to organic farming and the yeoman service he was rendering to agriculture, the central government conferred the National Award for the “Best Genome Saviour”. Before that, in 2011, he received the state award for the best organic farmer.

There are a couple of incidents to prove Jayaraman’s commitment to farmers and the agricultural community. First was the time when he was diagnosed with cancer in 2016. His well-wishers asked if he should go ahead with the paddy seed festival considering the state of his health. But Jayaraman stuck to his resolve to go ahead and conduct it in 2016. He didn’t stop at that. Despite deteriorating health, he held this festival in 2017 and this year, too.

And why wouldn’t he? Once, when the organising committee was short of funds, Jayaraman pledged his wife’s jewels and ensured that the festival continued to be held. His well-wishers later helped him retrieve the pledged jewels.

The second was what happened in Madurai a couple of months before he was hospitalised. It was an event organised by The Hindu Group and CREATE. Despite suffering pain, he attended the event, lying down outside the venue hall during breaks to overcome the pain.

When asked if he should punish himself this way, his response was that he wouldn’t want to miss an opportunity to share his knowledge. Three months ago, Jayaraman was admitted to a private hospital in Chennai, never to return alive again.

Even on 5 December, when rumour mills were agog on Jayaraman’s health, thousands of his well-wishers prayed for his well-being and recovery. He breathed his last on Thursday (6 December) at 5.10 am, leaving behind his wife, an organiser for nutrient foods at an Anganwadi, and a son in Class VI.

Thousands of organic farmers will find it hard to reconcile themselves to this great loss as Jayaraman embarks on his last journey – this time never to return. The creator’s call asking Jayaraman, aged 54, to return surely came too early.