Rama Gopalan: A Fearless Soldier Of The Hindu Cause 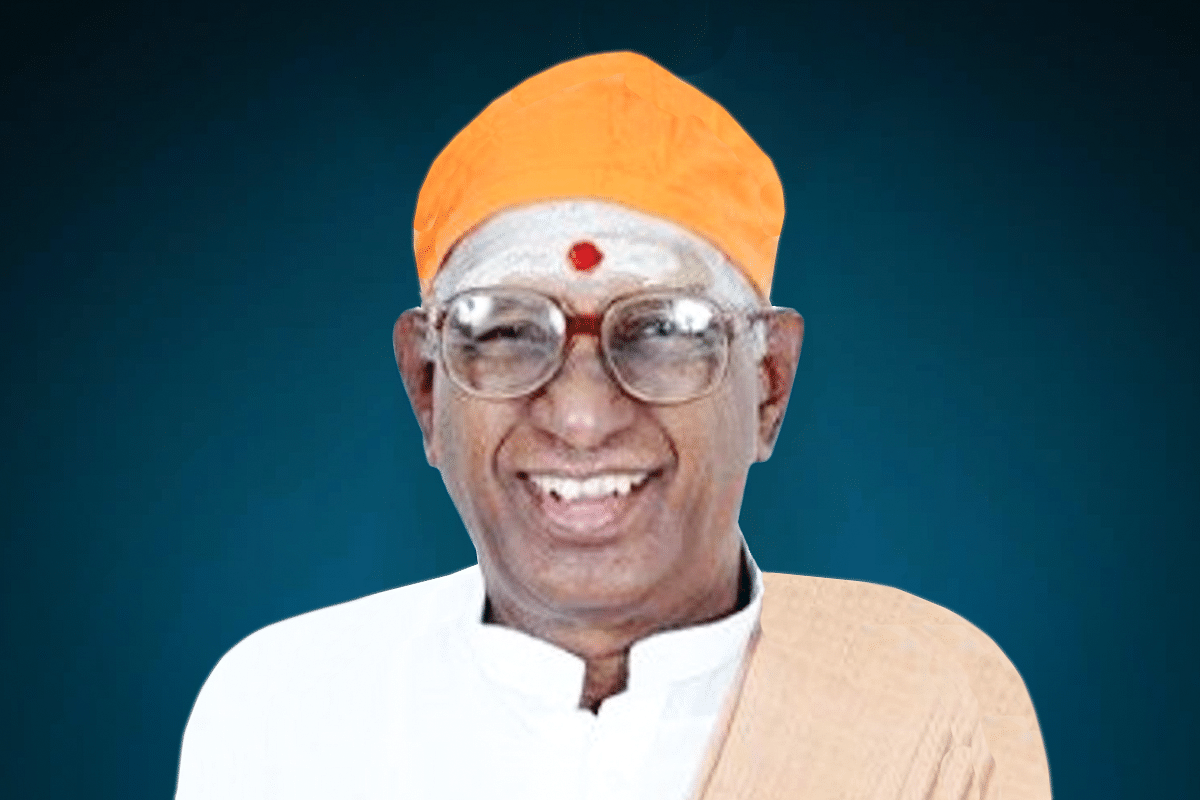 Growing up in Tamil Nadu’s Kanyakumari district in the 1980s, Rama Gopalan always had, and still has a galvanising effect in the minds of the Hindus.

In the 1960s and the 1970s, the district had become an unfavourable place for the Hindus. One has to either downplay the Hindu identity or completely renounce it to be respected in the work environment or in educational institutions or even in hospitals.

In a way, the state of Hindus in Kanyakumari district then reflected the future of most Hindus in Tamil Nadu. Though the people were being forced to renounce their Hindu identity to survive and live, they were not aware of their actions as they were ‘inebriated’ with the ‘Dravidianist’ opiate.

However, by the mid-1980s, the situation had changed.

Hindus in the district had started organising themselves. Overtly self-asserting Hindu schools sprang up. Hindus conducted processions of unity which shocked the political dispensation then — both ruling and the opposition. None could imagine bad-mouthing Hindu deities in the district and escape the consequences. The desecration of Hindu temples, a routine once, now stopped.

To top it all, in 1984 one of the constituencies of Kanyakumari district elected as MLA one V Balachandar — who openly declared that he would fight for the rights of the Hindus.

Behind all these changes there was toil and sacrifice of many. Of these, the name of Rama Gopalan stands bright among a dedicated few.

A swayamsevak from his early years, he was inspired by Bhagat Singh, whose picture adorned the wall of his house. The image of Bhagat Singh cutting his own head and placing it at the feet of Bharat Mata impressed young Gopalan, and that would remain forever the guiding archetype throughout his life.

As a young swayamsevak, he had served in the refugee camps of Hindus driven out of Pakistan. He also saw how the Dravidianist movement with its obscene oratory demeaned Hindus gods and goddesses in the name of rationalism, and leading to religious conversions.

He was determined to stop this. To counter the Dravidianist propaganda as well as safeguard the interests of Hindus, which were being violated in almost every village of Tamil Nadu by the missionary mafia, he founded ‘Hindu Munnani’ or the Hindu Front in 1980.

From Kanyakumari district he got a great friend who stood with him throughout the initial decades of strengthening Hindu Munnani — a Gandhian, Thanulinga Nadar. The duo became quite a sensation throughout Tamil Nadu. They toured and campaigned for Hindu unity and Hindu rights. They countered every form of attack on Hindus — from the propaganda to physical onslaughts.

Hindu Munnani became a force to reckon with not only for the conversion mafia but also for the anti-Hindu political dispensation. For every demeaning talk by the storm-troopers of the Dravidianist movement, the Hindu Munnani activists retaliated with equal vehemence.

When Hindu Munnani organised a counter meeting, Dravida Kazhagam organised a defamatory anti-Hindu meeting, and the police often cancelled both events. The Dravidianist movement was then also proxy for the radical Islamists, who were working overtime in Tamil Nadu in the mid-1980s.

Rama Gopalan targeted these jihadist forces and often exposed the financial supporters of the radical Islamist movements, asking Hindus to boycott them. These actions soon invited a murderous attack on him.

In 1987, Syed Ahmad Basha, a Coimbatore-based timber merchant, made an attempt on the life of Rama Gopalan at the Madurai station. He was severely injured and was in coma for a month. He carried the painful after-effects of that attack until the end of his life.

But in an amazing comeback that astonished the doctors, he doubled his enthusiasm and strengthened his mission. His whirlwind tours attracted youths in thousands, and many would become full-time workers for the Hindu cause.

One of the highlights of the sanghatan work in Tamil Nadu was the liberation of Jalakandeshwar Temple in Vellore when he reinstalled the traditional Shiva Lingam. The Shiva Lingam, weighing a few tonnes, had been shifted following Islamist invasion. After the usual humiliating desecration of the temple by Islamists, they and subsequently the Europeans made it into an arsenal storehouse.

During the British rule, Hindu Mahasabha leader Dr Moonje had tried to reinstall the Shiva Lingam and begin worship but could not succeed.

In the late 1970s, Hindu organisations and devotees had started campaigning for the restart of the puja and reinstallation of the deity.

However, Archeological Survey of India (ASI) rejected the pleas and had the temple in its control without allowing the puja.

In 1981, Rama Gopalan took the plunge into the movement.

Veerabhagu one of the key supporters of Rama Gopalan (who too had succumbed to Covid-19 a few weeks back) secretly brought the Shiva Lingam into the temple. When the officials and the district administration woke up that day in 1981, the pujas had started for the Shiva Lingam inside the sanctum with scores of devotees in attendance.

Finally, the government and ASI had to give in and the kumbabishekam was conducted overseen by Varriar Swamigal. Rama Gopalan was one of the chief warriors and strategists of Vellore Jalakandeswarar Temple reclamation — a forerunner to Ayodhya movement.

Rama Gopalan was also meticulous about documentation. For years, he wrote a series in the Sangh weekly Vijaya Bharatham in which he documented every violation of Hindu rights in the state. From unapproved illegitimate conversion halls of missionaries coming up in remote villages to a policy statement by a minister against Hindu interests in the legislative assembly — he documented all every week. This he did for years despite his heavy schedule and the pain he suffered since 1987.

That murderous attack on the founder of Hindu Munnani was one of the first major attacks and several others followed — assaults Hindu activists still face in Tamil Nadu. Rama Gopalan thus led the war from the front.

A strict disciplinarian and a tough task master, he was also a very humorous person. He was jovial and lively and built an atmosphere of happiness around him, whatever physical suffering he himself would be undergoing. He would never let his own problems show.

Ex-minister Pon Radhakrishnan was an apprentice under him during his formative years in the Sangh. He recalled that Ram Gopalan strictly forbade them from using the money collected during campaigns for buying food. He advised them to ask for food from the houses of Hindus. He said, “you can beg for food but never use the collected money for the Hindu cause to buy food for yourself”.

Such values shaped generations of youths who grew around him.

He was strongly moved by the plight of Tamil Hindus in Sri Lanka. He wrote a series in Vijaya Bharatham in the 1980s pointing out how Tamil Hindus are suffering in Sri Lanka. Hindu Munnani organised various demonstrations before the Sri Lankan deputy high commission in Chennai. He also fought for and gave his voice to the cause of Malaysian Hindus.

Based on this simple yet effective message, he organised huge campaigns in the 1980s and by the 1990s, a Hindu vote bank was created.

By the late 1990s, even the Dravida Munnetra Kazhagam (DMK) was speaking the Hindutva language, and at one point none other than M Karunanidhi started his campaign from a Hindu organisation platform.

One very little known, but very important aspect of his service to Hindu society is his concern for social justice and harmony. He had personally intervened in favour of scheduled communities and their rights to enter temples, chariot processions and other human and cultural rights.

He would never publicise them lest it creates a sense of victory and defeat among the communities.

Whenever he went to a village he would go to the temple where the scheduled community member was the priest and receive prasad from him after offering prayers.

Many villages became free of untouchability with the arrival of Hindu Munnani in the 1980s. His aim was to achieve both social justice and social harmony. He, however, kept his contributions to this cause under wraps, and those memories have now silently gone with him.

Unfortunately, the huge momentum Hindu Munnani created in the 1980s was lost during 1998-2004 in Tamil Nadu — particularly after the BJP partnered with the DMK. Rama Gopalan increasingly due to ill health could not continue the work with the same spirit. The anti-Hindu forces had become more emboldened in Tamil Nadu particularly in the media and polity during the United Progressive Alliance rule of 10 years.

With all these, Rama Gopalan and his contributions to Tamil Hindu cause started fading from the minds of the people. The very Hindus for whose well-being and protection Rama Gopalan had sacrificed his life would call him a fanatic or a rabble rouser, which was far from true. But Rama Gopalan always treated such harsh attacks on him by fellow Hindus as the words of indulgent children thrown at their elders.

Then and then alone you are a Hindu when you will be ready to bear everything for them, like the great example I have quoted at the beginning of this lecture, of your great Guru Govind Singh. Driven out from this country, fighting against its oppressors, after having shed his own blood for the defence of the Hindu religion, after having seen his children killed on the battlefield- ay, this example of the great Guru, left even by those for whose sake he was shedding his blood and the blood of his own nearest and dearest-he, the wounded lion, retired from the field calmly to die in the South, but not a word of curse escaped his lips against those who had ungratefully forsaken him!

Rama Gopalan was such a Hindu — in the fullest sense of Swami Vivekananda’s words. Om Shanti.