Modi Government Is Laying The Foundation For A New India: Uday Mahurkar 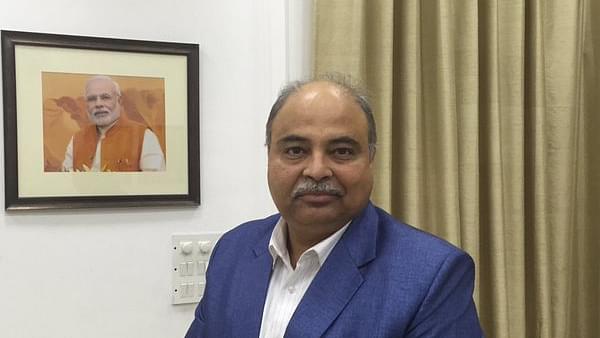 Uday Mahurkar, journalist with India Today, recently wrote a book, “Marching with a Billion”, analysing Narendra Modi’s governance model at completion of two and a half years in office as Prime Minister. Mahurkar first met Modi thirty years ago and since then has closely followed his political rise from a BJP karyakarta to the most powerful person in the county.

In an interview with Swarajya, Mahurkar talked about how much Modi has grown as an administrator and leader over the years, how he perceives Modinomics, what made Modi transform his image from a “pro-business” administrator to a “pro-poor” pradhan-sevak, and much more. Given below are excerpts from the interview:

How long has it been since you started following Prime Minister Narendra Modi, his politics, views and policies? And how much do you think he has grown over the years?

I have known Narendra Modi for the past 30 years. I met him around 1986-87 as a journalist in Gujarat. Being a good communicator, he always used to keep in touch, and when he became the chief minister, there was all the more reason for me to cover him.

I have seen his political rise up close and have deeply studied the transformation he has brought in himself as an administrator.

Every person with the passage of time improves himself and the same can be said in the case of Narendrabhai. As I peep over the last three decades, I think he has elevated his leadership skills to a whole new level today.

If you read my first book, ‘Centrestage : Inside the Narendra Model of Governance’, which covers his 13-year tenure as Gujarat chief minister and the latest one which is about his first three years in Delhi, you will find that Modi’s vision remains the same. As Prime Minister, he is doing much more to ensure that there are no glitches in last-mile delivery of programmes. He has learnt his lessons from the Gujarat experience well. There is greater emphasis on ensuring total transparency in the bureaucracy than it was in Gujarat. He has completely changed the rules of the game. There is not a single official in the PMO [Prime Minister’s Office] or in the major ministries whom you can influence.

Second, he is making use of technology more than before. All the government schemes are being monitored using the latest technology. His thinking is, if I cover four wrong people, then my aim of poverty elimination becomes that much slower. Hence, the entire emphasis is on targeted delivery, to the right beneficiaries.

Has Modi brought any institutional changes in bureaucracy that will stay on even when he is no longer the prime minister?

Of course. He has reformed the entire process of empanelment, an exercise which is used to select officers for posting at the centre. Over the years, a faulty system developed, where 90 per cent of the officers in central government service would get 90 per cent score in their appraisal reports.

Since there was a big fault in the selection procedure, everyone was outstanding on file. A new and better system of empanelment called “360 degree” has been put in place with modern HR practices studied from advanced countries.

Thanks to these reforms, a new bureaucratic pool of officers exists today at the centre whereas dishonest and inefficient officers have no place. Many bad apples have been shown the door and given voluntary retirement in the last three years.

People are still trying to understand Modinomics. Since you have followed him for so long, how do you think he approaches economics or public policy?

I have studied his finance management and dedicated one chapter in my book to the same. First, he lays great emphasis on stopping pilferage and leakage of public money. Focus on plugging the holes in government schemes should be seen in this light. This dedication to stopping wastage also flows from his commitment to poverty elimination so that money reaches only those who truly deserve it.

The anti-corruption drive also stems from the same commitment. This is the first government in decades where corporate houses and lobbies have no role in policymaking.

Modinomics, as I see it, is basically good and transparent governance, which he wants to use as a vehicle to eliminate poverty.

Many economic commentators believe that Modi’s obsession with chasing black money is choking growth, and this is having an adverse impact on jobs too.

I don’t believe that jobs are not being created. There might be problem in niche area jobs . But in any case, we don’t have reliable data to prove either way. Second, you cannot ignore self-employment. Take the Mudra scheme, for instance. Around over 6.5 crore small entrepreneurs have got these loans, and most of them are paying instalments in time. They are employing other people. These are not formal sector jobs, but the number is quite significant.

What do you think of some of the popular criticisms of Modi’s model of governance vis-à-vis Congress, such as that the government is “Congress + Cow” or that he is the most Nehruvian prime minister?

I totally disagree. This government is laying a new foundation for India. It engages with the common man in an extraordinary manner. Take, for instance, MyGov, the government’s website for inviting suggestions from common man on good governance. The government has received lakhs of suggestions and has accepted about 300 of them. The suggestion to turn post offices into payment banks came from an accountant in Hyderabad!

Or take the budget-making process. The government did away with the distinction of planned and non-planned expenditure, which was in a way also a method of camouflaging wasteful expenditure and corruption. The government has now replaced it with development and non-development expenditure. Now, we may soon move to a January-to-December fiscal year. Now, when the budget is presented, in March there are exams, and the bureaucrats get busy with the exams of their children. Then the monsoon starts, after which the festival season kicks in. The whole planning used to be done in a hurry and in an ad hoc manner. All that will be streamlined now.

Modi has even embraced many schemes of the UPA government, but made important changes to improve them. Though allocation to MGNREGA has been increased, it has been linked to asset creation. Then there is the direct benefit transfer of many subsidies in welfare schemes, which is saving the government exchequer thousands of crores per year by removing the middlemen.

See the work done in the power ministry. Nobody had thought of dashboard-based governance in India before. Now you can track the electrification of villages, LED distribution, etc, on mobile.

So when anyone says “Congress + Cow”, nothing can be farther from the truth.

You talk about Delhi’s high-command culture in your book. Has it really changed, because earlier Sonia Gandhi used to take all the decisions and now Modi-Shah do much the same?

I have a different take on this. It’s not so simple. In the Modi-Shah case, the intentions are noble. One may feel there is centralisation of power, but what is it being used for? There is more transparency and efficiency in the administration. There is more openness today when it comes to tenders. Even if there is centralisation, the aims of the people at the top are benevolent.

Why do you think Prime Minister Modi has spent so much of his hard-earned political capital in getting the GST passed?

India became a political union in 1950, but it did not become an economic union until 1 July when the GST was passed. And a large part of the economy is still informal. Modi wants to bring it on the formal side, and he sees GST as a weapon which will help India realise its full economic potential and give the country a European Union kind of economic muscle in the future.

During 2002-2007, Modi positioned himself as a Hindu Hriday Samrat. From 2007-2014, he championed himself as an efficient, pro-business administrator. Post-2014, he has again changed his image and is now projecting himself as pro-poor. Do you think this is a deliberate choice or the result of changing circumstances?

He isn’t changing. If you look at Shivaji, he made a few shortcuts and compromises before reaching at the top, but once he did that, he stopped all those things and turned his entire concentration on the common man. Modi has taken a similar path.

What do you think of the government’s Pakistan policy?

The Pakistan policy is much stronger and more well thought-out. I had criticised Modi when he went to meet Nawaz Sharif in Lahore, but now I feel that he was correct. He had decided to give Pakistan two years to correct its course, after which he would be free to take action. He even tried to woo Nawaz, but the Army runs the show there, so nothing came out of it.

On China too, Modi has charted a new course. He tried to woo China in the beginning, but it didn’t work out. The current China strategy is not what we used to behave like before. It is based on India’s confidence and strength. If you remember, before the G20 summit in China last year, Modi went to Vietnam and signed a defence deal. It was like seeing right into the bull’s eye, something India had seldom done before.

He is also trying to tackle China’s “string of pearls” strategy. There is a big battle going on with China on the diplomatic front. Modi has shown unparalleled negotiation powers. Sri Lanka, Nepal, Myanmar – all are closer to India than they were before in the light of Chinese hegemony and expansion plans.

In the first three years, we have seen a lot of disruptions from the government, good or bad, from Jan-Dhan-Aadhaar-Mobile, demonetisation, GST, now a change in financial year perhaps. Can we expect more surprises, or will things be calmer till 2019 polls?

A lot of people think that Modi does things at the spur of the moment. This is a wrong assumption. These disruptions are planned well in advance. And he doesn’t allow his mind to be read by anybody. I have said it in my book also that demonetisation was planned by Modi the day he opened the Jan Dhan scheme, and I have explained in my book how he has gone about it step by step.

So, to make a prediction as to what he will do next is impossible.