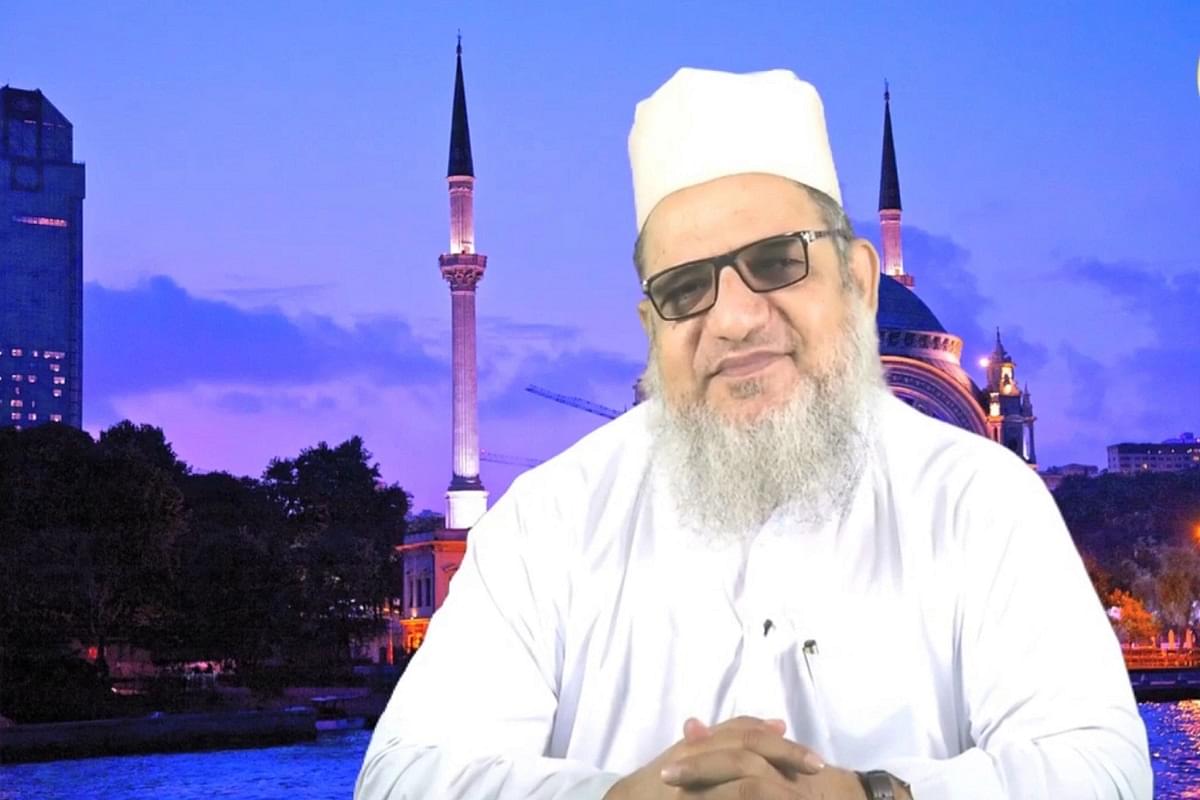 An interviewer in Saudi Arabia asked a well-known Indian cleric why he had made converting masses to Islam his mission. The cleric replied, “About 154,000 people die every day across the world. Of this number, at least 124,000 die observing ‘kufr’ and ‘shirk’. This means they get dumped straight into ‘dojakh ki aag’ to burn there forever.”

The cleric continued, “In the time I took to state this fact, fifteen more people have been thrown into this fire. They are already burning; there is nothing that can be done about it…What bothers me is that none of these thousands of people were offered an invitation to Islam that could have saved them.” (Watch the clip here from 12.16 onwards).

Siddiqui is widely popular among the Muslim population of India as well as neighbouring countries as a religious preacher. Since his arrest, Islamic institutions across the country, including Aligarh Muslim University, have been staging street protests, demanding his immediate release.

In a press note, the ATS described Siddiqui as “Khalifa of Ali Mian in Dawah activities”, that is, kingpin of conversion rackets in India. The note says he has converted more than five lakh non-Muslims to Islam, mostly in Haryana’s (notorious) Mewat.

Siddiqui is the most prominent of all arrests made so far by Uttar Pradesh ATS in its ongoing crackdown on Islamic conversion groups in the state. Before him, Mohammed Umar Gautam, Mohammed Jehangir, Abu Bakar and Adam alias Prasad Kanwre, among several others, have been booked and jailed.

A native of Muzaffarnagar district in UP, Kalim Siddiqui has been accused by the anti-terrorism agency of carrying out mass conversions in the guise of social welfare work.

Of these, Dawat-e-Islam Trust in Mewat is said to have converted most people.

In June when the ATS began its crackdown, video of a Dalit man from Mewat was circulated widely on social media. In the video, Memchand said that he was from the Jaatav (scheduled) caste and was lured into converting to Islam by Abu Bakar and his mentor Kalim Siddiqui.

Memchand described them as leaders of Tablighi Jamaat, which is an influential Islamic expansionist movement with headquarters in New Delhi’s Nizamuddin. Last year, Tablighi Jamaat’s global head Mohammed Saad was found preaching to his lakhs of followers that the novel coronavirus was Allah’s curse on 'kaafirs' (non-believers of Islam).

Memchand said that the group targets Hindus from Scheduled Caste (SC). He said they are offered money and land in lieu of accepting Islam. He said he had accepted the offer too, but was “tortured” later and forced to attend jamaats. (Watch the video here).

Siddiqui’s interviews and talks reveal a fanatically superstitious mind, particularly towards the Islamic idea of eternal hellfire for non-believers. His obsession with this idea borders on psychotic.

In an interview, Siddiqui said that Muslims must weep in agony if they see any non-Muslim die as the dead would be thrown into eternal hellfire.

In a talk, Siddiqui narrated an incident of a Hindu friend inviting him for his father’s terahvin. The friend sent a letter to Siddiqui, which stated that his father had passed away at the age of 85 and the family had planned a gathering. In the letter, the father’s name was prefixed with “swargeeya” (one who goes to heaven).

Siddiqui told the interviewer, “You know how Hindus cremate their dead and organise terahvin and barsi to mark specific days of mourning. Little do they know that they don’t go to heaven as assumed, but burn in the hellfire forever. We Muslims know it all too well.” (Watch the video here from 13.20 onwards).

Siddiqui describes his conversion work as “work of humanity”. This is how he explained it in the interview: “If even a dog accidentally gets its leg burnt, we feel pained. How then can we not feel pained when hundreds and hundreds of bodies are being thrown into hellfire daily? This is against humanity. Our Prophet has sent us to save humanity.”

In the same interview, Siddiqui admitted that most people who convert to Islam do so for fear of hellfire. (Watch here.)

In a talk, Siddiqui proudly narrated an incident where he converted an old Sikh woman from Punjab to Islam over the phone.

The woman had been suffering from an illness for several years. She met a Muslim pir and told him about the constant pain in her body. The pir asked her how she would survive hellfire if she could not stand a little pain.

The woman, shocked and worried, asked him about the solution. The pir connected her with Kalim Siddiqui for the solution.

Siddiqui narrated, “The pir gave her my number and asked her to talk to me. I talked to her and advised her to read Kalma to avoid hellfire. She agreed.”

The woman insisted on coming all the way from Punjab to meet Siddiqui. He told her not to do so as she was unwell and “there is no guarantee of life”.

He made her read the Islamic vow - that Allah is the only true God and Mohammed is his only true messenger - over the phone. She died a couple of days later.

Siddiqui continued, ”The woman’s sister met me later. She said that before her death, the woman saw divine ghosts coming to take her to welcome her in the next world.”

Siddiqui said that he sent a team to Punjab to make sure the woman was buried as per Sharia and not cremated as per Sikh rituals. (Watch the video here).

The press note by ATS mentions this obsession of Siddiqui with hellfire. “In the guise of giving sermons on humanity, the Maulana instils fear of hellfire in the hearts of people, which makes them not only convert to Islam but also become active missionaries,” the note says.

As per ATS, Siddiqui is a graduate in science. Though he studied at a madrassa in his initial years, he went on to complete his intermediate in science followed by a bachelors degree in science from a Meerut college. The ATS note further says that Siddiqui managed to pass the all India pre-medical test and was about to take admission into MBBS course but, influenced by Islamists, joined an Islamic seminary in Lucknow named Darul Uloom Nadwatul Ulama.

His science background may be at odds with his obsessive belief in eternal hellfire and related ideas, but Siddiqui’s motivation could well be money. It’s a known fact that Islamic conversion activities attract large funding from Islamic countries, particularly from the Middle East.

As per ATS, the money was given by UK-based Al-Falah Trust, but Umar Gautam and his group could not explain the trail. Probe into Siddiqui’s various organisations is on.

It’s pertinent to mention here that Siddiqui has been a member of the Sharia Advisory Council of Zakat Foundation of India (it’s not known if he continues to hold the post) that is famed for coaching Union Public Service Commission (UPSC) aspirants and rehabilitating Rohingyas in India.

In one such public talk, Siddiqui narrated an encounter with a Hindu taxi driver. The driver called him ‘bhai’ (brother) as a form of greeting. Siddiqui told the driver that since he had called him brother, the driver must accept his invitation to visit his home. Moved, the driver agreed.

“Within ten minutes, he agreed to read Kalma,” narrated a smiling Siddiqui. As per Siddiqui, as many as 83 people from the driver’s clan and friend circle followed suit. (Watch the video here from 3.44 onwards).

Siddiqui attributes this and similar "victories" to the “kind and simple nature of Hindus who are perpetually hungry for love”.

“The driver told me that I showed him so much love that he promptly agreed to do what I asked of him,” Siddiqui said.

The cleric has been open about this master strategy to turn Hindus into Muslims.

In an interview, Siddiqui was asked if Hindus are a difficult people to get mass converted into Islam. Siddiqui replied that it’s not true at all.

“The truth is we Muslims have not approached them with enough love. Hindus are a people constantly in need of love, so much so that they end all their enmities and differences in two spoons of ‘sewaiyan’ on Eid. People of Hindustan want love. Indeed, it is the last remaining bastion of love,” Siddiqui said. (Watch the video here from 10.05 onwards).

Some of Siddiqui’s talks may give an impression that his obsession with conversion, though involving corruption of money, may be driven by his ability to convince with words. This may be far from truth.

Following his arrest, several phone conversations of Siddiqui emerged in the media and on social media, purportedly leaked by investigating agencies. They suggest a dark, sinister underbelly of crime.

One such conversation between Siddiqui and an unidentified man suggests that Siddiqui’s conversion racket might have been indulging in heinous crimes such as murder.

Here’s how the conversation goes: Siddiqui asks the man to attend an event as a “Da’i” [one who invites people to Islam]. The man tells Siddiqui that he has devoted himself to Allah. Siddiqui says he must carry out many conversations. The man says that whenever he meets “Jinns” [a reference to non-Muslims], he asks them to convert to Islam and, if they don’t, he kills them as “Allah has also given him a sword”. Siddiqui replies with “shaabaash” (very good). The man continues, “Either they accept Islam or I will kill them.” Siddiqui responds with another “Shaabash”.

Another phone conversation reveals Siddiqui talking about arranging “upper caste girls” to clients. Siddiqui rues that this work has been impacted by lockdown.

The ATS’s press note says, “He [Siddiqui] is also alleged to be involved In trafficking of women particularly upper caste Hindu girls.”