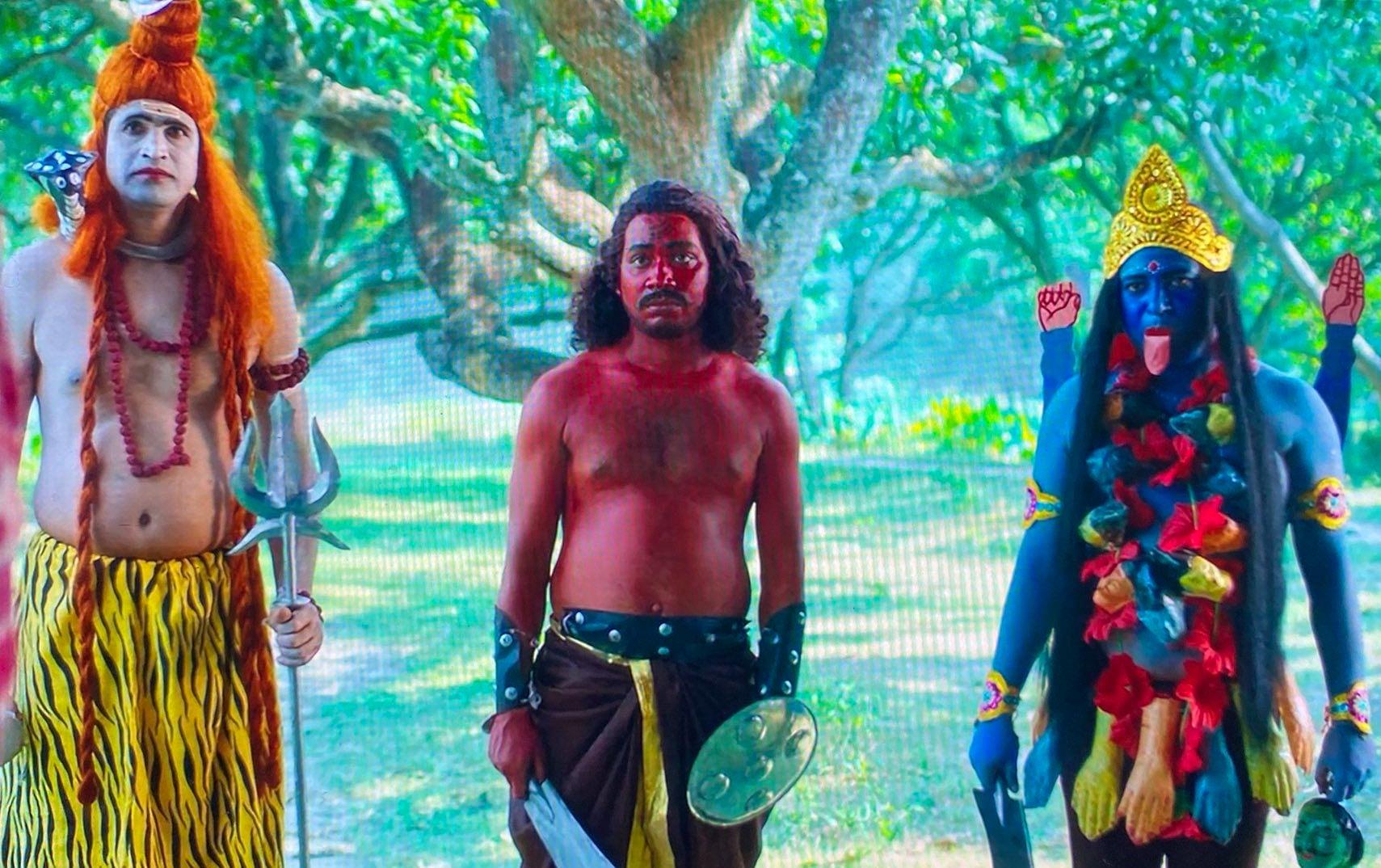 A scene from the film Ludo. (Vivek Agnihotri/Twitter)

At a time when the world is fiercely debating limits of creative freedom as jokes and cartoons are resulting in not only beheadings but also massive rallies supporting these beheadings, the Indian entertainment industry has little to worry.

It never treaded the path that leads to beheadings.

For decades, it has been playing within a safe zone which, at most, leads to faint boycott calls of films or advertisements on social media. This zone revolves around jokes on cow, gaumutra, mandir, sadhu and Hindu deities.

Recently released film Ludo, directed-co-written by Anurag Basu and touted as a ‘dark comedy’, stays firmly within this limit. And not very creatively.

A Netflix original film, Ludo, is an anthology of four separate stories that come together in unexpected twists and turns.

While Akash and Shruti (played by Aditya Roy Kapur and Sanya Malhotra) are desperately trying to get their sex video pulled down from the Internet, Alok Kumar Gupta alias Aloo (played by Rajkumar Rao) is moving mountains for Pinky (played by Fatima Sana Sheikh) – the only woman he has ever loved and who is now married and has a baby. While a gunda Batukeshwar Tiwari alias Bittu (played by Abhishek Bachchan) emerges from jail to find his wife has a new husband and his daughter a new father, a small-town boy and a Malayali nurse together stumble upon a rogue suitcase full of money.

The film has been described as “largely entertaining” and “a mixed bag” by regular film reviewers in Left-wing publications, some of whom have heaped special praises on the cow and mandir jokes.

Let’s examine some of this attempt at humour.

In his introduction scene, Akash, who is a stand-up comic and voice artiste, cracks a cow joke and a ‘godi media’ joke.

The cow joke goes like this: Akash asks a woman from the audience which country she belongs to. The woman replies it’s New Zealand.

Looks like Urduwood can't think beyond cow, gaumutra, Hindu gods and Ramlila to create comedy. Because messing up with others ends in tragedy@netflix's latest offering #Ludu by @basuanurag cracks jokes on cow being sacred for crores of Hindus in Bharatpic.twitter.com/EwjlS5XqWx

Of late, Indian comics who call themselves liberals – whether Hindus and Muslims, but mostly Hindus – have been repeatedly mocking the status of cow as sacred in Hindu-majority India.

Such jokes can be appreciated only by those ignorant of history – of how invaders slaughtered cows to subjugate the cow-revering natives, and how Hindus and Sikhs made cow protection a form of fierce resistance against invaders.

Read a previous piece in Swarajya on this here. Below are a few excerpts:

It was because of cow’s sacred status that heroes like Maharaja Ranjit Singh banned cow slaughter during their rule, even making it punishable by death in some cases.

If 70 years later, so-called ‘liberal’ Hindus mock the sentiment around cow, it shows their ignorance. Or their express alignment with the ideology of invaders.

From mocking cow, the film quickly moves to mocking Ram.

The scene introducing Alok alias Aloo shows a Ramlila in action. Alok, playing Shurpanakha in a green lehenga, tries to seduce Lakshman with Bajirao-Mastani references. Lakshman chops off her nose.

However, when Alok notices real blood oozing from his nose, he screams loud in front of the audience – “bhenc**d”– and thrashes the men playing Lakshman and Ram. Audience doubles up with laughter.

Ramlila is just a joke for Urduwood. They hate it as those who relish Ramlilas don't watch crap that Bollywood doles outpic.twitter.com/csfxW4rvH6

Offended? But doesn’t this scene has real life precedents? Don’t the Ramlila acts put together by local residents in small towns and villages around Dussehra indeed throw up such hilarious scenes at times?

What is also true across India is that Christian pastors shake the mythical devil out of a man’s genitalia on stage and Muslim maulvis issue fatwas that women shouldn’t pluck eyebrows without male permission, no Muslim should play Pokemon and a woman raped by father-in-law must begin treating her husband as her son.

If Bollywood cannot dare to push the boundaries of its ‘safe zone’, we have all the right to mock them for their lack of spine. And find the hackneyed Ramlila jokes as not funny and even offensive.

Next, the film shows Shruti having sex with her boyfriend Akash when her mother unexpectedly calls. Shruti answers the phone and stammers – “Mummy, main mandir mein hun (Mummy, I am in a temple)”.

#Ludo Review Clip 5:
Girl is having sex. Mummy calls. She says - "I am in Mandir"

Why not Dargah or Nizamuddin?

Afterall when Urduwood has to do good things like sing nice songs, it goes Sufi@basuanurag - why such hate for Hindus in your film?pic.twitter.com/XRZXD5Bc1B

There is no scene in the film showing Shruti visiting a temple or praying to Hindu gods, even in her most distressing moments. The only mention a mandir gets is in middle of a sex scene.

Hilarious? Well, try imagining the scene with a Shruti or Fatima saying “Mummy, main Nizamuddin Auliya mein hun”. Get it?

Further ahead, the film repeats the tested formula of Aamir Khan’s anti-idolatry film pk (director’s words, not ours) – tested for safety, that is. To no real life consequences, pk made a huge mockery of Lord Shiva, through a man dressed as Lord Shiva.

In Ludo, three men outrageously dressed as Hindu gods are props for a light, comic scene. The men are performing in a mela. The one dressed as Shiva is wearing an orange wig. Another is dressed as Ma Kali.

Noticing that the performance is evoking laughter from a little girl, her much older friend Bittu (played by Abhishek Bachchan) kidnaps the three and gifts the girl an exclusive show. The men, though dressed as gods, are helpless in front of a gunda.

This is new laugh recipe in Urduwood. No guts to crack jokes on Pirs and Fakirs & one who should not be named, @basuanurag? Et tu @juniorbachchan?pic.twitter.com/OFK0YsegyU

This scene, not related to the core plot, could have easily used clowns and madaris, but then why would beef-lovers and Ramlila-bashers spare a chance to mock Hindu gods?

In another scene, a husband who suspects his wife Pinky is cheating on him with Aloo, taunts her that she must have slept with him in return for his favours. “Sab pata hai hamko. Mataji ne diya hoga badle mein prasad (I know everything. Mataji [Pinky] must have given him prasad,” the husband tells her, “prasad” here meaning sex.

This, in brief, is a review of the humour in Ludo. Banal and formulaic. Neither creative nor brave.