After #UP2017, What Remains Now Of Kanshi Ram’s Movement? 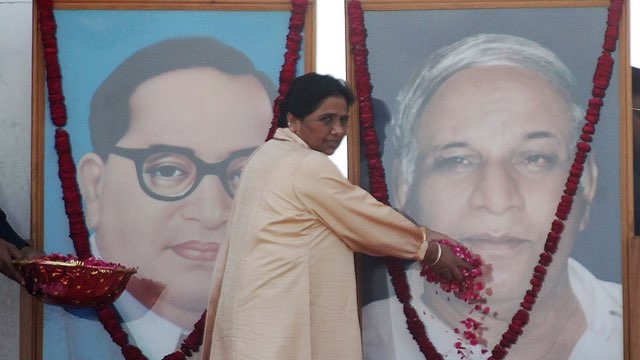 Bahujan Samaj Party Supremo Mayawati’s press conference on the 11 March was quite painful to watch. The proud Dalit demagogue was reduced to alleging Electronic Voting Machine (EVM) fraud so that she could ensure that her cadre did not abandon the remaining hope as well. One felt even worse for some award-winning journalists who had predicted a Mayawati victory on Twitter.

Around the middle of the election, we were told that since Uttar Pradesh government babus had started to spruce up statues and memorials erected by Behanji, it was obvious that she was winning the election. Sadly, electoral politics very seldom follows scripts penned by the most ardent and well-intentioned bleeding hearts.

To most pseudo-liberals around us, Mayawati was the obvious choice under the circumstances. They could obviously not be seen to be rooting for the decidedly communal Bharatiya Janata Party (BJP) and the Samajwadi Party (SP) had run such a train wreck of a government at any rate that except for the card-carrying fans of the Gandhi family not too many seemed to be rooting for them.

However, to anyone with a most basic understanding of how the politics of Uttar Pradesh has played out since the 1990s, it was clear that Behanji was always going to be the third wheel this time and there is cold hard math behind it.

In an effectively triangular contest, 30 odd per cent was never going to be enough to win a majority The other disadvantage that she suffers from vis-a-vis, for that matter even the Samajwadi Party, is that her vote share has a more even spread across the state. Hence, her capacity to convert votes into seats is slightly weaker. Even when she was riding a crest of popularity in 2009, she had come third in terms of seats despite polling the single largest share of the popular vote.

Hence, to me, as I had repeatedly stated in this space earlier, it was not a surprise that she ended up with an almost embarrassingly low number of seats (19) despite being the only player to have actually added two percentage points to her vote share compared to what she polled in 2014. The combined vote share of the Samajwadi Party and the Congress actually dipped from 30 per cent in 2014 to about 28 per cent in 2019 while the BJP also understandably bled a couple of percentage points from the staggering 44 percent that it had polled three years ago.

Years ago, Manyawar Kanshi Ram had dreamt of a formidable social alliance of the lowest castes with backward castes and Muslims to forge a coalition capable of taking on the Brahmins of the Congress party who had, in Mayawati’s mentor’s words reduced the Dalit community to ‘chamchas’.

The slogan that was shouted enthusiastically in BSP rallies throughout the Hindi belt and not just in Uttar Pradesh was ‘Vote Hamaara, Raaj Tumhaara. Nahin Chalegaa Nahin Chalegaa’. The other oft-repeated slogan was ‘Bamhan Thakur Baniya Chhod. Baakee Sab hain DS-4’.

The big question is whether in her almost three decades of public life has Mayawati been able to unite the DS-4 in order to upend the hegemony of the entrenched caste elites? The answer to this question can neither be totally in the affirmative nor in the negative.

She has certainly succeeded spectacularly in ensuring that the Dalit community today does not look askance towards their upper caste patrons before casting their votes in favour of one party or the other specifically in Uttar Pradesh. It is also a fact that since 1993, she has succeeded for the most part in uniting about 60 per cent of the Dalit community as a whole and the Most Backward Castes (MBCs) of Uttar Pradesh under her banner.

However, where she has failed spectacularly is in creating the second rung of mass or even semi-mass leaders, who could fetch her votes apart from her caste constituency of Jatavs who are the most dominant members of the Dalit community as a whole in Uttar Pradesh.

More importantly, due to perhaps her insecurity, she has not allowed the BSP to organically develop into a political force to reckon with even in states like Madhya Pradesh, Rajasthan and Haryana that are demographically otherwise not altogether dissimilar to Uttar Pradesh.

In the run up to 2017, the fighter that she is, Behanji tried with all her might to attract Muslim votes. Being an exceptionally wily politician, she knew full well that her 2007 combination of Brahmins, Atipichdas and Jatav Dalits was unlikely to work for the simple reason that the first two along with non Jatav Dalits were plumping for the BJP.

However, except perhaps in constituencies where Muslims constituted more than 40 per cent of the population, by and large, the Muslim community did not show much enthusiasm for her.

My assessment is that since the BJP was on an upswing, they preferred to vote for whoever was better placed to defeat the Saffron Party in a particular constituency. Her ambitious Muslim outreach was thereby comprehensively beaten at the hustings by a resurgent BJP.

The easy option now for Mayawati would be to ally with the Akhilesh Yadav-led Samajwadi Party in 2019 to ensure her survival. This seems to be the most likely scenario as well given how both ‘Bua’ and ‘Bhatija’ seem to have warmed up towards each other while reserving the choicest invective for the BJP and Narendra Modi.

This might look attractive and even if one were to make an allowance for the few Dalit voters who might loathe to vote for a Samajwadi candidate or, the few Samajwadi voters who would be apprehensive to vote for a BSP candidate, there is a good possibility that such an alliance would be able to win at least 40-50 of the 80 seats from Uttar Pradesh in 2019.

It might just also end up winning the Uttar Pradesh Vidhan Sabha election in 2022. However, to my mind, this would be less than advisable.

The tougher option would be to take her constituency beyond the tired shibboleths of identity politics and to fashion a novel developmental paradigm thereby emerging as the main opposition party to the BJP in the state.

Having said that, I don’t see her taking the second option, and in this view of the matter, the BJP would be well-served if it builds up an effective second-rung Mahadalit leadership in Uttar Pradesh to take her and the Samajwadi Party on in the future.