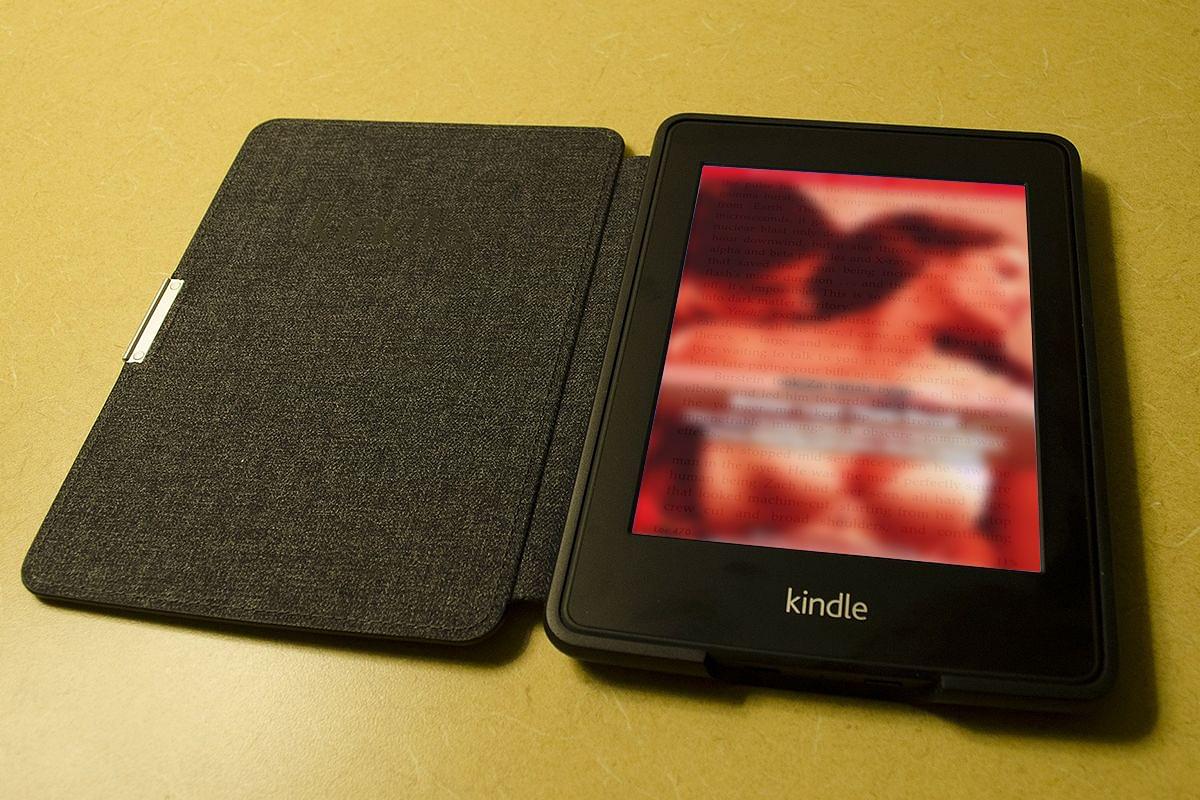 Authored in the name of ‘Neelima Stevens’, the 35-page book shows on its cover a man in skull cap and a bindi-wearing woman revealing deep cleavage.

A paragraph in the book reads, “He was specially turned on by Hindu women…he liked the awe-faced expression of these women whenever he would show his big c*** with a circumcised head. Apart from his regal size, he definitely earned brownie points from Hindu women, by the way his cut **** looked. It was definitely a ‘huge’ surprise for such wives, who were accustomed to uncut penises of modest sizes.”.

The book concludes with strictly vegetarian Shweta beginning to enjoy meat on insistence by Ashraf. She also agrees to be paid by him for their sexual escapades.

There are more than 20 titles on Kindle available in the name of this author.

Another book, titled Indian wife cheating: sex with neighbour, is an erotica featuring a woman from “a conservative Iyer family in a religious environment” and her “neighbour” named Murshid Sheikh.

The text uses words like “Madrasi prostitute” and “whore Hindu bitch”. It gets worse.

A paragraph says, “The cultural and religious disparity between us – him a Muslim man from UP (North India) and me, a Hindu Iyer lady form Madras (South India) added to the taboo element.”

Another book by the same author, titled Cheating wife’s affair with husband’s friend, contains this paragraph, “Vinita worshipped the Muslim man’s penis, exploring every nook and cranny of his genitalia.”

The book features on its cover a man with a beard and two women in sari. It is a sick rape fantasy about a Hindu woman who is repeatedly raped by a Muslim “don”, through threats of making her sexual videos viral. The book says the woman secretly enjoys the sexual assaults.

Pavish Singh is name of yet another author, who has about a dozen titles on Kindle. The name of one of his books, available for Rs 226, says, Hindu wife sexy encounter with Muslim driver.

“My name is Vedika, a 27-year-old married woman from a upper middle class hindu family living in Saharanpur,” reads the opening line of the book.

Another author, Nikki Ravlani, has two titles on Kindle. The publisher’s name mentioned on the cover of his books is ‘Risque Factor publishing’.

One of the books is titled Four tales of high-class married Hindu women being taken by low-class Muslim males. It’s available for Rs 164 as Kindle edition.

The publishers of such books seem to be taking advantage of Amazon’s Kindle Direct Publishing service, that allows just about anybody to make an account and self-publish. All that one needs to do is create an account, and enter author name, payment and tax information before publishing.

The Amazon website states strict guidelines for self-publishing. Apart from guidelines on copyright, trademark and exclusivity of content on its platform, the website has a section called ‘other prohibited content’ which says, “As a bookseller, we provide our customers with access to a variety of viewpoints, including books that some customers may find objectionable. That said, we reserve the right not to sell certain content, such as pornography or other inappropriate material.”

The page gives an option to readers to report a book if it violates the guidelines.

The website also has an elaborate section on ‘offensive and controversial materials’, which says that Amazon “does not allow products that promote, incite or glorify hatred, violence, racial, sexual or religious intolerance or promote organizations with such views.”

Comparing the guidelines with the said books, it does not seem that Amazon is doing enough, or anything at all, to vet the content before it is made available for easy access to anybody with Internet and an online payment mode. The books we have cited above seem to violate several of the stated terms.

Titled Muslim housewife becomes a slut: Indian woman is dominated by a Hindu stud, the book bears ‘Sana Khan’ as author’s name. This book is the sole such work in the author’s name.

Several themes in the above-mentioned books, in fact, have disturbing similarities with real life incidents. For instance, story of a Muslim man repeatedly raping a Hindu woman by threatening to circulate her sexual videos, in the book Hindu wife becomes night treat for Muslim mafia don, has many precedents in real life. Read here, here and here.

This correspondent has covered several cases where Hindu women have accused Muslim men of targeting them for their religion, with a purpose of converting them or humiliating them.

A 13-year-old Hindu girl, who was gangraped by three Muslim men in Kaushambi district of Uttar Pradesh last year, told this correspondent that when she pleaded them to spare her in the name of “bhagwan”, the three asked her to say “Allah Allah” instead. The men gangraped her and recorded the act on camera which later went viral.

They were sentenced to life in a fast-tracked court trial.

This June, a Hindu woman gave a complaint to police against a Muslim man named Waseem Ahmed, accusing him of posing as Dinesh Rawat to trap her into a relationship and recording her sexual videos.

As per the woman’s statement recorded in the first information report, Waseem revealed his identity much later and told her that he cheated her because he “wanted to teach you people a lesson”.

The man was recently denied bail by the Meerut district court.

As is evident, religious targeting of women makes women of that religion vulnerable to sexual assaults and other crimes.

The state of Uttar Pradesh recently passed a draft ordinance against religious conversions done through deceit, force or misrepresentation.

Chief minister Yogi Adityanath called it a step towards tackling the targeting of non-Muslim (particularly Hindu) women for conversion by Muslim men, a phenomenon that the chief minister, activists, media, general public and key government officials such as vice-chairman of national minority commission, call ‘love jihad’.

The Uttar Pradesh’s government brought in the law after a spate of such crimes were reported in the media, mainly from western UP where Muslim population is higher than the national average.

The platform of Amazon has in the past too been used to sell products insulting Hindu sentiments.

No less than late Sushma Swaraj, then External Affairs minister in the Union cabinet, publicly and strongly raised the matter in 2017 when Amazon Canada was found hosting traders of doormats with the Indian flag printed on them. Swaraj warned that unless Amazon tendered unconditional apology and withdrew the said products, India would not grant visa to any Amazon official.

Amazon vice-president Amit Agarwal then wrote to Swaraj regretting the same. The reply came at a time when Amazon had vowed to invest more than $5 billion in India.

A year earlier, users had objected to Amazon selling doormats with Hindu deities printed on them.

Earlier this year, Amazon CEO Jeff Bezos – said to be the world’s richest man – was given a cold shoulder by the Indian government during his three-day visit to India, reportedly over several anti-India reports published in Jeff Bezos-owned Washington Post.

In Amazon’s defence, the company’s open online marketplace may have too many products to undergo in-house vetting. However, the products that we are talking about may do much more harm than merely hurting sentiments.

At a time when the Pakistani Army is pumping money into content that seem to encourage Hindu women to fall prey to Muslim men (see this ‘item song’ funded and pushed by Pakistani Army where an Indian Hindu woman is shown fantasizing Pakistani men), the proliferation of the said e-books point to a nefarious design where an enemy hand cannot be ruled out.

The Indian government would do well by looking into the matter, and do so from all perspectives - gender crime, communal hatred, internal security, and external threat.

The link is also mentioned in the tweet below:

Hereâs a list of more than 90 books which we found on @KindleIndia, on pornographic and rape fantasy novels. Most of them specifically depict Hindu women and Muslim men.