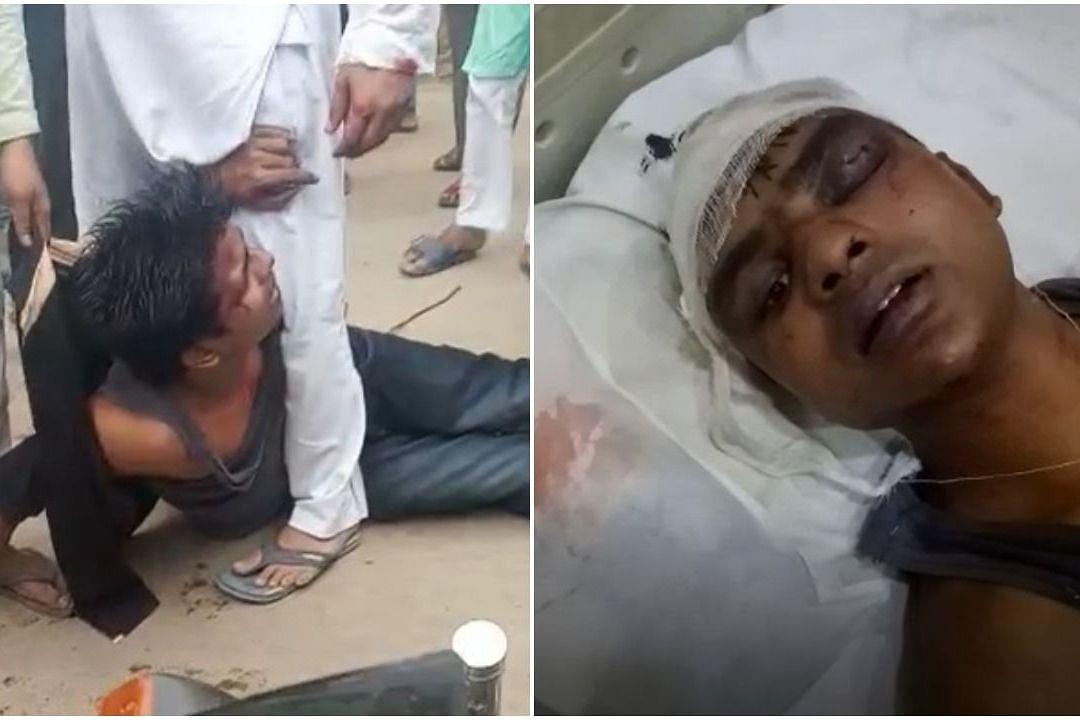 Still from videos showing Shashank being thrashed and injured

Miscreants molest a Dalit woman in her workplace, rip apart her kurta, declare their intention of making her a Muslim. When her husband intervenes, he is dragged to the street and brutally beaten with iron rods and abused with casteist slurs.

His sister and brother try to intervene but also get beaten up. When the husband becomes unconscious, the miscreants flee. However, they proudly get the thrashing captured on video.

What is the crime of the victims? Simply that they are Dalits, who dared to run a computer coaching centre in a “Muslim area”.

This did not happen in an obscure village, but in the heart of Uttar Pradesh’s Amethi district – a constituency that has historically elected the most influential politicians of India.

Shashank Padam Bhushan Sonkar, 27, runs a coaching centre in Mohalla Kharkha of Amethi’s Jais area. He told this correspondent over the phone that he opened the centre, which provides a free one-month course in computers, under the prime minister’s Digital India programme. The mohalla, with around 200 families, is inhabited only by Muslims, he said.

As per a First Information Report (FIR) filed on 21 June, Sonkar and his wife Gayatri were at the coaching centre when around 3:50 pm, one Mazrool Hasan barged in and began to molest Gayatri. When she protested and raised an alarm, Sonkar rushed in, but Hasan dragged him out of the centre while mouthing casteist slurs like ‘saale Khatik’ (Khatik is a Scheduled Caste). Within five minutes, Hasan was joined by three more men – Shabbu, Faiziyab and Rehaan – who launched an assault on him using iron rods with the intention of killing him. They also attacked Sonkar’s younger brother Mayank and sister Sarika when they intervened.

The police booked the four men under IPC sections 354 (outraging the modesty of a woman), 323 (voluntarily causing hurt), 504 (provoking breach of peace) and 506 (criminal intimidation) along with the relevant sections of the SC/ST Act.

What The Victims Say

The assault on Sonkar has been captured on camera. Multiple videos of the attack went viral on social media on Saturday when he went public with the incident. He shared his plight with a rights organisation on social media, expressing dissatisfaction with the police action.

The FIR does not mention the attackers’ motive and several other allegations that the victims say they told the police but were not added. Sonkar said that some local Muslims residents wanted his centre to be shut down.

He is Shashank Sonkar - a Dalit. He is in this condition for daring to run a coaching centre in a Muslim area of Amethi. And oppose when they tore his wife's kurta to rape.
Etch these visuals in your mind, this is the state of Dalits in Muslim populated colonies of India. 1/n pic.twitter.com/cst2KuVd7t

“Mazrool and some other men in the area have been pressuring me to shut down the centre. They are jealous that a Dalit like me is able to successfully run a coaching centre while several men from their community failed to do so in the past,” Sonkar said.

Asked about the trigger for the attack, Sonkar said he cannot think of any. “It was a Friday and Mazrool came straight after the community prayers. Maybe they decided something at the meet,” he said.

Gayatri said that Mazrool touched her inappropriately and when she resisted, he tore her kurta. “Mazrool told me he would make me a musalmanni [Muslim woman],” she said.

The couple has been running the centre for several months now. While attempts at intimidation have been routine, they were subjected to assault for the first time, she said.

The institute has been locked since that day. After the assault, a heavily injured Sonkar was taken to the primary health centre in Jais, from where he was eventually referred to the district hospital in Rae Bareli. Sonkar was admitted to hospital for a week.

Sonkar passed on two contacts to this correspondent – one, of Azad Mehboob who owns the space rented to Sonkar for the centre and two, of Khatija Bano who is a student there.

Mehboob said that at the time of the incident, he was sitting at his shop on the ground floor. “The centre is located on the terrace so I do not know what unfolded inside. But I saw Sonkar being dragged out and mercilessly beaten,” he said.

Mehboob said he had no idea why the group assaulted Sonkar. “I snatched a wooden rod from an attacker twice and tried to intervene. But I do not know till date what really ensued between the two sides,” said Mehboob.

When asked if Mazrool and the other men indeed wanted Sonkar to shut the centre, Mebhoob said he did not know. He, however, said that nobody in the area ever pressured or asked him to get his rented space vacated by Sonkar. Mehboob said that Mazrool’s own daughter is a student at the centre.

Khatija, 22, corroborated this, but said that Mazrool’s daughter had been absent for a week prior to the assault. Khatija said she saw Mazrool enter the room and molest Gayatri, but did not recall hearing any religious or casteist slurs. “I was too shocked to notice these details,” she said.

Mehboob said that after the assault, Mazrool defended his act to the onlookers by saying that Sonkar had molested his daughter – an allegation he said was refuted by the girl herself in front of the police.

What The Police Say

He informed that Mazrool and Faizayab have been arrested, but the motive of the assault has not been established so far. He refused to further speak on the matter, saying the investigation was on.

The official handle of the Amethi police also shared a statement by circle officer Tiloi on the sections applied and the arrests made after the videos were widely shared on social media. MP from Amethi, Smriti Irani, also shared this statement through her Twitter account.

A rights organisation named Agniveer has now taken the case to the National Commission for Scheduled Castes (NCSC). A letter addressed to NCSC chairman Ram Shankar Katheria accuses the police of going soft on the attackers. It says the police deliberately dragged on the investigation and did not record the victim’s statement under section 164 in time, enabling the rest of the accused to get a stay from the court against their arrest. The letter also says that those backing the accused are pressuring the Dalit side into withdrawing the case.

Sanjeev Newar, founder of Agniveer, told this correspondent that the “massive increase in Dalit atrocity cases” is alarming. “It is even more alarming that on a Friday, after praying to God for peace, miscreants molested a Dalit woman and became a lynch mob. They don’t even realise that Sonkar was only helping the Muslim youth through his centre,” he said.

Newar accused the police of making the case weak by applying soft charges.

“Massive loopholes in conduct of case seems visible. How High Court stay came if police arrested first? Why IPC charges r weak? Why no charge of attempt to murder? Why no religious hatred angle seen when it happened after Friday prayers? We have taken matter to higher authorities (sic),” he tweeted to Amethi police.

A response by the NCSC is awaited.