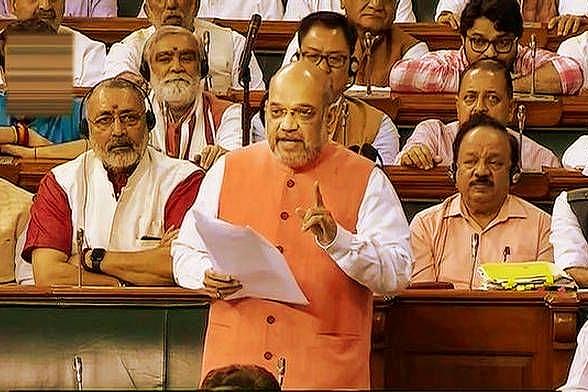 Home Minister Amit Shah referred to Burma as “Brahmadesh” during the Parliamentary debate on the Citizenship Amendment Bill 2019 in the Lok Sabha yesterday. The mention of Burma as Brahmadesh came from Shah in the context of the Rohingyas.

Though Shah did not make or use any stress on this (Sanskrit) name for Myanmar and mentioned it as "Brahmadesh" in India's context as an Indian (and his outlook), just mentioning it did reveal some symbolic weight coming from the Home Minister in Modi Raj.

The mention coincides with the historic tabling and debate, the theme -- which looks at the direct consequences of some political decisions made in India's past -- the gravity of his speeches, the need, purpose and the intensity of the debate.

Amidst this, Shah's use of “Brahmadesh” went pretty smoothly in the flow of words and the careful insertion perhaps skipped the attention of the Opposition.

Even more interesting is that the mention flew past sections of the media that usually does not take kindly to the use of Sanskrit in BJP's narrative in or outside the Parliament.

It must be noted that Shah is not the first to bring the mention of “Brahmadesh” in Myanmar’s context during recent years. This article in The Myanmar Times reports on an exhibition aimed at revisiting the Chola Empire’s architectural grandeur. It mentions India’s relations with “Brahmadesh”.

It says, “India and Myanmar have shared cultural heritage from long past. The Tamil Chola Empire had trade relations with the kings of Brahmadesh (now Myanmar).”

Uttar Pradesh Chief Minister Yogi Adityanath, who has been at the helm of promoting Ayodhya, Hindu and Buddhist religious tourism, mentioned “Brahmadesh” during his Myanmar visit according to this report.

It says, “Describing Myanmar as ‘Brahmadesh’, Yogi spoke highly of India’s neighbour saying the people of the two countries were united in mind and spirit by a common approach to religion.”

A mention of Brahmadesh in RSS leader Indresh Kumar’s call for Akhand Bharat in 2016 is given in this article.

When Shah mentioned Myanmar as Brahmadesh, he was talking about the impression being built that the Muslims of India are being discriminated against.

He then immediately shifted to the context of Rohingyas in India.

The Bill was tabled in the Lok Sabha on 9 December. It was passed after a debate at the break of 10 December.

Shah's verbal machinery -- in his speeches on 9 December and beginning of 10 December -- was concentrated and aimed at presenting the integrity of Bharat as a civilisation, the need for the Bill, and the need for securing the Indics living in Pakistan, Bangladesh and Afghanistan. Was the mention of “Brahmadesh” grounded in that emotion?

Shah added that minorities in India were not living in fear, and if they were, it could be the result of the Opposition’s narrative. He further added that with Narendra Modi as the Prime Minister, the minorities living in India need not live in fear and that the government was committed to ensure equal security and equal rights for all.

In his speech he talked at length on the events of the Partition, how minorities have suffered in the three nations, assuring that India will not discriminate on the basis of religion.

At a time when India is celebrating the Bhagwat Gita, Shah’s mention of “Brahmadesh” could be seen as his way of giving the rich land and nation of Burma the due tribute in this historic watermark in the Parliament. It could be indicating an interesting moment for a spark of a deeper connect.