An Unlikely BJP Ally In South India? With Early Elections In Mind, KCR Seen Cozying Up To The BJP 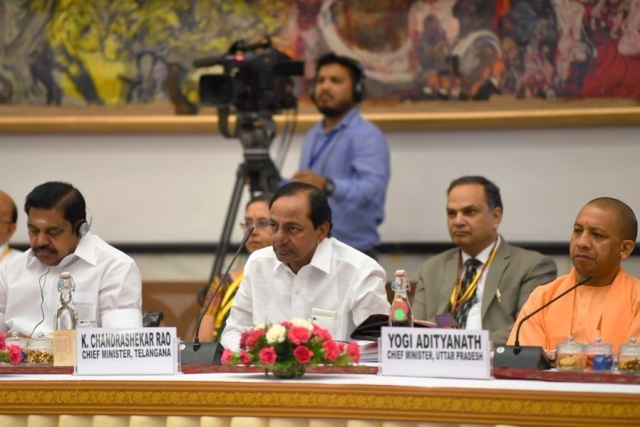 Addressing a meeting at Telangana Bhavan on the occasion of city Congress leader Danam Nagender joining the TRS, Mr Rao said the TRS is ready for early elections and challenged the Opposition to clarify whether they too were ready.

Since these remarks come soon after KCR, as he is popularly called, returned from Delhi after meeting Prime Minister Modi, these remarks are being seen as significant.

The Lok Sabha and TS Assembly polls are due in April-May next year. There have been talks of holding simultaneous polls, and also the speculation that the general election could be advanced to the year end, to coincide with Assembly elections of Rajasthan, Madhya Pradesh and Chhattisgarh. Assembly elections in Telangana and Andhra Pradesh could also be clubbed with them.

On another note, the Chief Minister seemed to be upbeat post the recent Niti Aayog meeting on several accounts, reports Sunday Guardian. He is satisfied with the Centre’s response to the state’s wish-list and is ready to go with the BJP on a range of issues – this despite his plan of floating a front comprising non-Congress, non-BJP regional parties.

Reportedly, he also kept away from other non-BJP and non-Congress CMs – West Bengal CM Mamata Banerjee and Karnataka CM H.D. Kumaraswamy – who he had met a few months ago, as part of his plans to float a federal front. Neither did he say anything to support Delhi CM Arvind Kejriwal.

On the other hand, the report also mentioned his sharing good vibes with BJP CMs such as Yogi Adityanath (Uttar Pradesh), Shivraj Singh Chouhan (Madhya Pradesh) and Raman Singh (Chhattisgarh) at the Niti Aayog Governing Council meeting last Sunday. KCR was the only non-NDA Chief Minister to extend his full support to the Niti Aayog’s agenda for the next one year.

The proceedings have hence led to the speculation that he may have put on hold his plans to float a federal front before the Lok Sabha elections and might even go for an alliance with the BJP, but post the elections.

Local news portals also noticed that post his recent meeting with the Prime Minister, there is a visible change in his approach, and that after returning to Hyderabad, he has advised key leaders and officials to focus on policies which could win the hearts of the public during this crucial period. An indication has been given that development programmes have to be completed by November this year.

The news of early elections being a possibility was floating earlier this year as well. In February, Sunday Guardian had reported that the Telangana CM along with his Andhra Pradesh counterpart had welcomed the proposal of holding simultaneous Assembly and general elections made by Prime Minister Narendra Modi.

However, they were later miffed at the rejection of their long list of demands for funds for projects and schemes, and so it was not clear if they would still go ahead with consent for the proposal. KCR is understood to have told his MPs to back the proposal but insist on securing funds to the state.

The KCR government in Telangana has taken up some flagship programmes like Mission Bhagiratha (supply of drinking water to all households) and distribution of cash to farmers, and completing them before polls was important.

In fact, last week, India Today had listed out, in a report titled ‘Evergreening the Electorate’, the number of programmes being executed in a hurry by the state’s Irrigation minister, as per the Chief Minister’s wish. Some of which were: a Rs 5-lakh insurance scheme for farmers, irrigation to farms, uninterrupted electricity supply and investment support. The Telangana irrigation department has sought Rs 675 crore in central monies under the Dam Rehabilitation and Improvement Projects (DRIP) to modernise 34 dams. Central government support is also expected to renovate 28 irrigation utilities in the state.

It will be remembered that KCR’s had tried even earlier to extend a hand of friendship to Modi for some time now. In March last year, a report had pointed out that in the preceding 33 months – and after setting aside the bitterness of the 2014 poll campaign -- TRS government maintained cordial relations with the BJP-led NDA government at the Centre.

There were also reports then that TRS may join NDA government, and KCR’s daughter K Kavitha may get a cabinet berth, neither of which were denied by the TRS. The report called KCR a “master strategist”, saying that he was playing cards close to his chest.

With little stakes in the national politics and the newly created state remaining his focus, he may even go for an alliance with the BJP in 2019 elections. Some pointers in this direction were: his writing a congratulatory letter to Modi after the BJP’s victory in UP and Uttarakhand with massive majority; KCR was one of the few non-BJP CMs to openly back Modi’s demonetisation move, calling it a historic move and also suggested a few measures to compensate for the possible loss of revenue; hailing Modi for providing ‘for the first time 100 percent corruption-free governance’ to the people of India.

The local website’s analysis was that by doing this, KCR trapped Modi, who in return praised him for fighting for the interests of Telangana. Again, even though a month later, BJP chief Amit Shah while addressing a public meeting in Warangal labeled TRS government as the most corrupt government in the country, KCR did not get provoked and maintained friendly relations with Modi.

Political analysts had said that this master stroke of KCR will prevent BJP’s local leadership from going all out against the TRS government, and ultimately prevent BJP from expanding itself in India’s youngest state. Also that if BJP gained strength in the state in the run-up to 2019 elections, KCR may play another master stroke by joining hands with it. `If you can’t beat them, join them’, the report had concluded.

For now, the chief minister is confident of winning the elections on the back of his schemes. The CM said that the latest survey by various independent agencies revealed that the TRS would win 100-plus Assembly seats out of 119 in Telangana. “People are enjoying each and every scheme brought forth by the government. If the opposition wants to test the waters they can come; let us go to elections in the next few months”, he said, adding that TRS will win more than 100 seats and the margins will be 50,000 to 70,000 in each constituency.