Are The Sabarimala Devotees Fighting A Three-Front Battle? 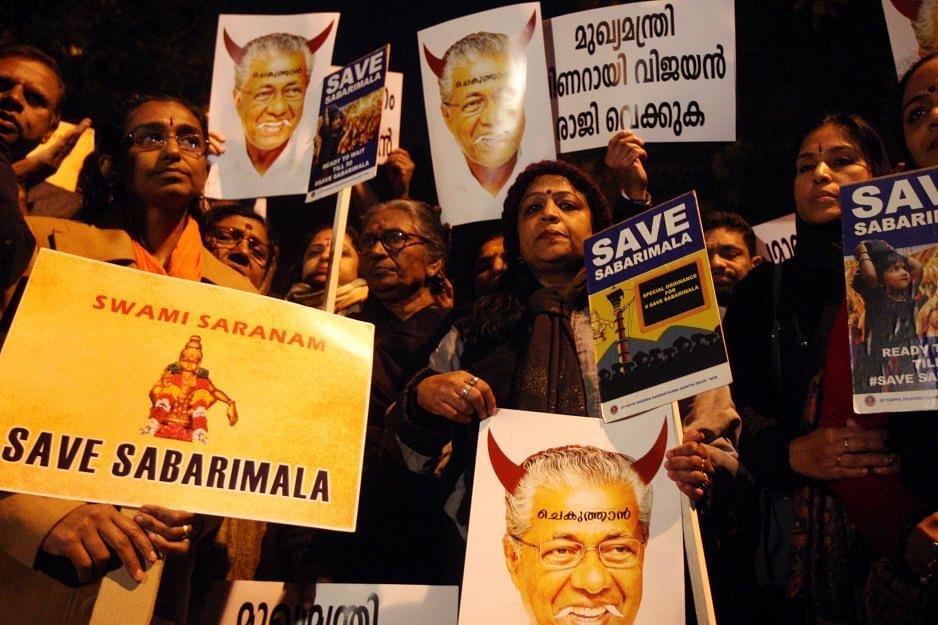 Consider this. The Left Democratic Government (LDF) Government headed by Pinarayi Vijayan suddenly says that about 10 women of reproductive age could have had darshan at Sabarimala Ayyappa temple. Suddenly the Kerala police, who facilitated the visit of two alleged Maoist activists - Bindu and Kanaka Durga - clandestinely, are equipped with close circuit television (CCTV) claiming more women had darshan at the temple.

This comes amidst confusion regarding whether a Sri Lankan woman in her late forties entered the temple for darshan. The Sri Lankan woman has gone before television cameras to deny she had entered the shrine but Vijayan and his police force want us to believe otherwise.

#SaveSabarimalaTradition LOL @timesofindia LOL @the_hindu LOL @asianetnewstv What do we send you guys? Old hat or torn socks to eat? This is video from @MirrorNow (BCCL stable) pic.twitter.com/92ahSykmNR

A scrutiny of the developments since 28 September when the Supreme Court ruled that women of reproductive age could enter the Sabarimala temple, shows that three forces have perhaps, by design or coincidence, come together, much to the chagrin of millions of Ayyappa devotees.

The agenda of the Communist Party of India-Marxist (CPM) Government in Kerala is clear. It wants to somehow break the spirits of Hindus in the state, and the country too, and thus create a wedge between them.

In the name of ensuring equality, the State Government has forgotten everything else and taken up entry of women into Sabarimala temple as its priority. Importantly, the state government has turned a blind eye towards preserving the sanctity of the shrine.

Kerala has still not recovered from the devastating floods of 2018, the worst in 100 years, and Vijayan never forgets to remind people that a lot needs to be done to put the State back on the path of development. The Chief Minister’s adamancy, however, has resulted in the state seeing five hartals in the past 3 months.

Is this the way to administer a state where floods have wreaked havoc just a few months ago?? The development agenda of the state has completely taken a back seat.

After coming to power in 2016, the LDF Government declared that it would attract more investments in infrastructure and ensure increased investment in the state. Five months short of three years, the state seems to have lost the plot in attracting investments.

More painfully, the Government has been going through one problem after the other - starting with the incidents of dengue, floods and now protests over entry of women of reproductive age into Sabarimala.

When the CPM Government took over the reins of the state, there was a lot expected from it but by playing politics, which alienates the majority Hindus, Vijayan seems to have caused much more damage. The CPM’s machinations to divide the Hindu community, become transparent when one sees the kid gloves with which other religious communities in the state are treated.

The LDF dragged its feet on taking action against Roman Catholic Bishop Franco Mulakkal, who allegedly raped a nun repeatedly at a convent in Kottayam. In addition, the State government has also shown no intent to implement the Supreme Court ruling on the Piravom Church issue in Ernakulam, made in July last year.

Another question to be asked of the Vijayan government is regarding the double standards exhibited in dealing with issues of other religious communities in the State. Vijayan and his authorities are not able to handle less than 100 Christian devotees of the Piravom church but go all out to try and crush Ayyappa devotees who are protesting the Supreme Court ruling.

Similarly, the LDF Government has shut its eyes to activities of the People Front of India (PFI) which has a suspicious role in the cases of 10 people leaving Kerala to join ISIS (Islamic State of Iraq and Levant) in Syria and Afghanistan last month. The 10 are in addition to the 21 who had left in July 2016, soon after the CPM took over the administration in State.

The Vijayan Government could have probably waited for the Supreme Court to take up the petitions seeking review of the Sabarimala Ayyappa temple entry ruling. The hearing comes up on 22 January and the State government would have lost nothing by choosing to wait for the apex court to take a decision on the review petitions.

When a Government shirks its responsibility to work for the state’s development and focuses on things that can ideally wait, it is clear that the party in power is working with a distinct agenda. Instead of maintaining the peace in the State and averting further escalation of tension, till the review petition is heard, the CPM Government has accorded priority to crushing the spirit of the devotees at Sabarimala.

Nothing is more illustrative of this than the Vijayan government secretively providing access to two activists rather than real devotees to the Sabarimala temple. And the follow up statements on more women entering the shrine even without any substantial evidence only to shatter the faith of the Hindu community at large.

Last week in a programme on Daily Thanthi, one of CPM leaders, Balabharati, said her party saw Ayyappa as comrade and not God. The anchor of the programme asked her if women devotees would also be allowed into Vavar mosque since Ayyappa devotees first pay their respects to Vavar Sami before embarking to enter the Sabarimala shrine.

The CPM leader tersely responded by asking the anchor to not create new issues! The duplicity of the party on gender equality is evident from this and it is adequately clear that the first force working against the Ayyappa devotees is the state itself.

The second force operating in the state is the Church. As soon as the two activists entered the temple, one of the theories that made the rounds was that this was a conspiracy by the church.

A police investigation on the 1951 fire mishap at the Sabarimala temple pointed at a “Christian conspiracy”. The investigator at that point had come up with evidence that looked like conclusive proof, but stopped short of naming anyone.

The charges against the church are that it has been able to leave its imprint on most hill shrines in the South, including Tirupati Tirumala but Sabarimala has till date been an exception and that makes it a target for the church.

Congress President Sonia Gandhi has also asked her party men not to wear black bands in protest against the entry of the two women into Sabarimala. Sonia Gandhi’s diktat to her party men, especially in Kerala, stops her state cadre from taking up the issue further. Since then, the Congress has been missing from the protests against the Vijayan Government.

What needs to be borne in mind is that the Congress campaign against the LDF government in Kerala on the Sabarimala issue was spearheaded by Ramesh Chennithala. The other two senior leaders of the party, former chief ministers Oommen Chandy and A K Antony have at the most been silent spectators on the whole issue.

The third force that is working in Kerala are the Dravidian forces. Nothing is more revealing of this than the attempt by Manithi women organization, which is backed to the hilt by the Dravidar Kazhagam (DK), to enter the Sabarimala shrine. The attempt was led by Selvi Mano, a Christian, indicating that it had little to do with faith or devotion and was purely a part of agenda-driven politics. That apart, of late, DK stalwarts like K Veeramani and Suba Veerapandian have been coming up with their own weird theories on Sabarimala and its rituals.

reason why Hindus must never vote for DMK, pic.twitter.com/dYeGZdI7aH

A video shows DK leader K Veeramani terming the black dress worn by Ayyappa devotees as “duplicate”. The DK seems to be heading the group in Tamil Nadu that wants women of reproductive age to enter the Sabarimala temple. The Dravida Munnetra Kazhagam and its president M K Stalin, too, are backing this, though they oppose the ordinance banning triple talaq.

Thus, the Kerala government appears aided by the church and the Dravidian groups in enabling the entry of women of reproductive age into Sabarimala Ayyappa temple. But what their act exposes is how the so-called secular forces are trying to psychologically wreck the mindset of millions of Ayyappa devotees and divide the majority community to press forward their own agendas.