Arundhati Roy’s Book In A Tamil Nadu University’s Syllabus: How The Left Abuses Its Position Of Power In Academic Citadels To Impose Its Ideology 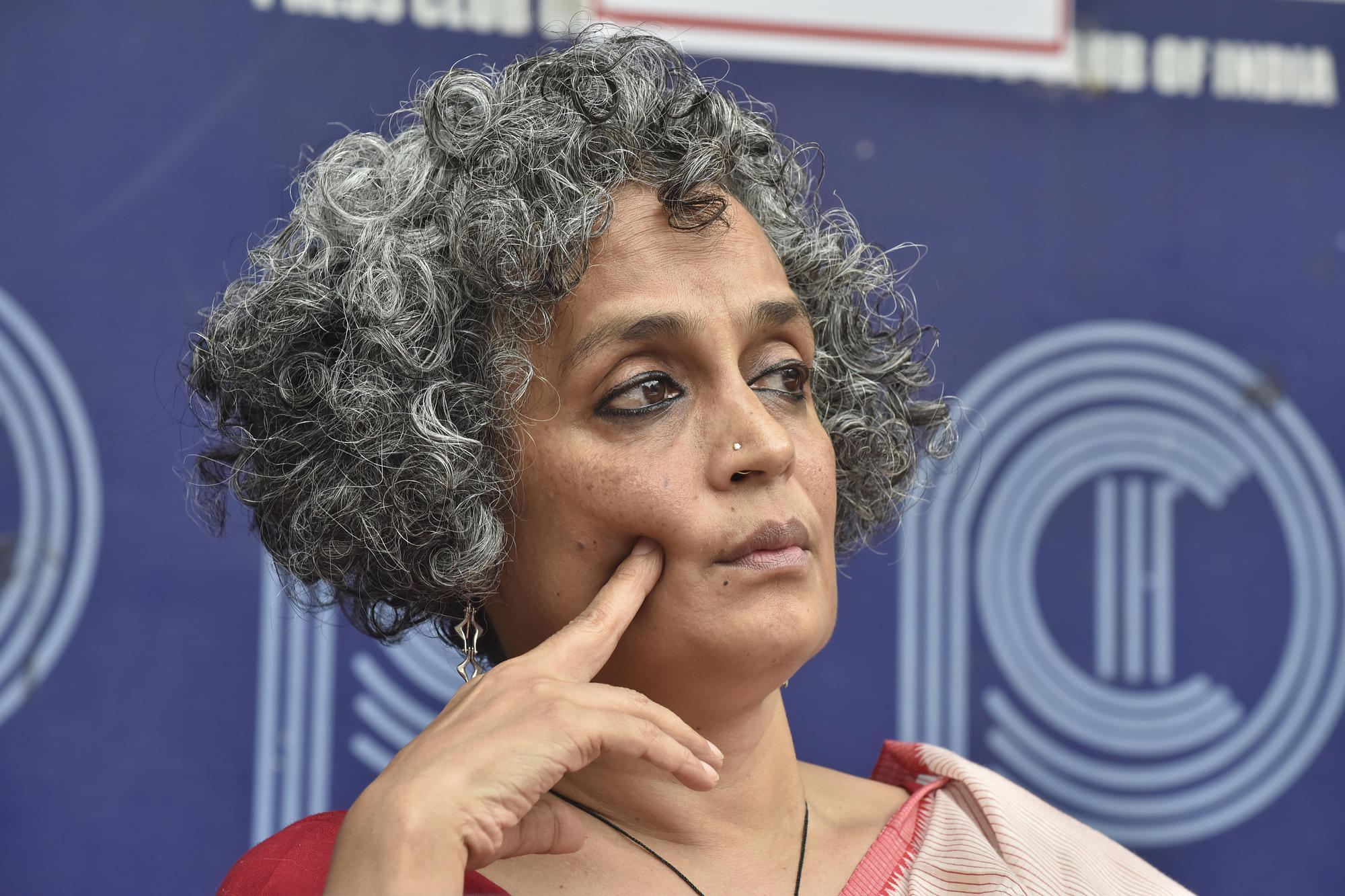 A new controversy has erupted with Manonmaniam Sundaranar University (MSU) of Tamil Nadu deciding to remove from its post-graduate English syllabus the book Walking with the Comrades — a compilation of political articles written by Arundhati Roy in the Outlook magazine, later published in 2011 by Penguin India.

The book was included as an elective subject for non-fiction for the postgraduate English literature and language course of the university in 2016-17.

The book is indeed a fine sample for ideological rhetoric in English, the ideology being ‘Breaking India’.

Here are two samples of what a post-graduate English student would learn as part of ‘non-fiction’ — a carefully worded justification of the Maoist kangaroo courts called ‘peoples’ courts’:

On the other hand, what about ‘encounters’ fake and otherwise — the worst form of summary justice — that get policemen and soldiers bravery medals, cash awards and out-of-turn promotions from the Indian government? The more they kill, the more they are rewarded. ‘Bravehearts’ they are called, the ‘encounter specialists’. ‘Anti-nationals’ we are called, those of us who dare to question them. And what about the Supreme Court that brazenly admitted it did not have enough evidence to sentence Mohammed Afzal (accused in the December 2001 Parliament Attack) to death, but did so anyway, because ‘the collective conscience of the society will only be satisfied if capital punishment is awarded to the offender’.

Almost from the moment India became a sovereign nation it turned into a colonial power, annexing territory, waging war. … All of this behind the benign mask of democracy. Who have these wars been waged against? Muslims, Christians, Sikhs, Communists, Tribals and, most of all, against the poor, for the most part Dalits, who dare to question their lot instead of accepting the crumbs that are flung at them. It’s hard not to see the Indian State as an essentially upper-caste Hindu State (regardless of which party is in power) which harbours a reflexive hostility towards the ‘other’. One that in true colonial fashion sends the Nagas and Mizos to fight in Chhattisgarh, Sikhs to Kashmir, Kashmiris to Orissa, Tamilians to Assam and so on. If this isn’t protracted war, what is?

That a student at her impressionable age is made to learn from those whom she may consider as authority-figure, such biased material in the name of acquiring language skills, should be really worrisome — for any academic and parent.

The point is not that the book contains controversial subjects, says academician and educationist Dr Umaiyoru Bhagan, who was also an office-bearer of MUTA the mostly left-wing teachers’ association of both Madurai Kamaraj and Manonmanian Sundaranar universities.

He had even courted arrest for the union. The problem is the clear ideological indoctrination in the name of language skills, he says.

In principle one should not be opposed to Arundhati Roy, he says, but her essay should have been included as one of the many essays showing varied political views.

Had they added an essay by Arun Shourie on leftwing historians which displays the same rhetorical skills like Arundhati Roy, then having an essay by her should not have been a problem for anyone, he says.

Dr Umaiyoru Bhagan also points out this is not the first time a university has been forced to drop a book.

In 1985, Madras University removed Kamala Markandaya's novel Two Virgins from the curriculum, nine months after it was prescribed by the academic council for the first year BA (English Literature). R Umanath, a CPI(M) lawmaker, condemned the book. This was appreciated by Prof S F N Chelliah of Loyola College, he pointed out.

The book has a visceral hatred for the entire Indian state and picturises it as an evil state while romanticising the Maoists. The university could as well have opened a recruitment counter for Maoists with campus selection.

This is not the first time elements higher up in the MSU have used their position to exploit the curriculum for ideological indoctrination.

For the academic year syllabus 2012-13 for BA Tamil literature first year, first semester a short story collection by comrade D Selvaraj was made part of the curriculum. The lead story in that collection was one on Aandal, which called her as the illegitimate child of Periyazhwar and as a girl of Devadasi clan etc.

Filled with historical fallacies, the story seemed to have been written with the singular intention of derisively deconstructing a Hindu Divine.

Advocate Visu is the district advisory committee member of Nehru Yuva Kendra, Kanyakumari. He was a student when the Aandal controversy erupted in the university.

He remembered taking a principled and nuanced stand during the controversy: ‘We never asked to ban the book nor even condemned the perverted writer. His perversion was his business and freedom. But we objected to such a version being thrust down the brains of impressionable young students. That was nothing but naked academic fascism."

The whole meeting in which this book was brought into the syllabus seemed to have been done with undue haste according to the newspaper reports then.

Visu is of the opinion that the very fact the university removed the story then and the book now shows a worrying situation.

"That means they knew what they had done was wrong. But still they did it because they wanted to promote an ideology. They wanted the charade to go on till someone discovered it and questioned it. Perhaps it is time for complete and thorough look into the controversy and see how the ideologues have played havoc with our education using their authority."

Another academician, who does not want to be named, spoke of a particular academic cabal operating in a very stealthy way promoting a particular ideology.

"We have actually always tolerated the clearly pro-Marxist approach promoted in literature and humanities. But now they have included a book that romanticises and glorifies armed Maoist insurgency against India. Now someone has to draw a line," the academician said.

Certain individuals get promoted repeatedly in almost all academic councils of the university — individuals with hatred towards Indian democracy in general and Hinduism in particular, the person who wanted to remain anonymous pointed out.

The radical-left-anti-Hindu cabal in the higher echelons of the university has the power to finish off one’s academic career is the stated reason for the anonymity.

Even more ironical is the voice of the Dravida Munnetra Kazhagam (DMK) that they would bring back into the syllabus this mediocre political rhetorical text.

Written during the United Progressive Alliance (UPA) government, the text contains the harshest accusations against P Chidambaram and Manmohan Singh regime of which DMK was a chief component.

The book portrays Chidambaram as a pro-corporate corrupt villain – waging a genocidal war against the tribal community for the sake of multi-national companies.

Sonia Gandhi and the ‘crown prince’ also come in for criticism. So if the Akhil Bharatiya Vidyarthi Parishad (ABVP) is to go purely by politics, as it has been accused of, then it need not oppose a book that shows the political enemies of the BJP as blood thirsty scheming goons.

The opposition is not for the biased inclusion of Arundhati Roy’s book, which is only the symptom. The opposition is for the abuse of the position of power in the academic citadels through which a violent anti-democratic ideology is being shoved down the formative grey matter of the young minds — permanently damaging them turning them into zombies romancing with self-destructive ideologies like Maoism.

What we need is a curriculum that makes the young minds think and experience a variety of human thoughts and dimensions. We do not want our academic institutions to become indoctrination camps and recruitment cells for monopolistic ideologies which aim to destroy India.