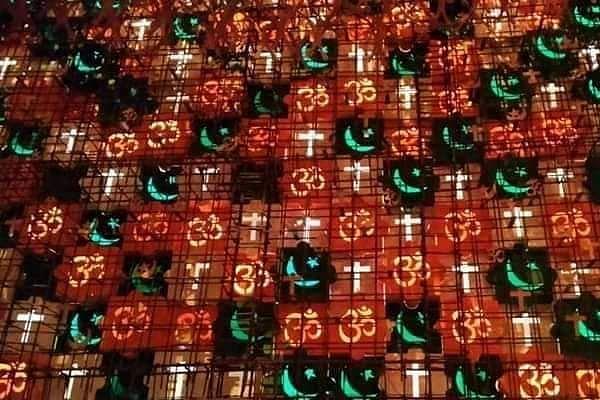 A recording of azaan, the Muslim call for prayer from mosques, played repeatedly at a community Durga Puja in the heart of Kolkata over the last two days has caused widespread outrage. A lawyer has also filed a police case against the organisers of the Puja for hurting the religious sentiments of Hindus.

The community Durga Puja at Beleghata’s 33 Pally (in south-central Kolkata) had been playing a recording of azaan since the festivities commenced on Maha Panchami (Thursday). Not surprisingly, the primary organiser of this community Puja is senior Trinamool leader Paresh Paul, who is also the local MLA.

The entire pandal is decorated with religious symbols of Hinduism, Christianity and Islam — the Aum, crucifix and the star and crescent. Huge banners at the entrance of the pandal also display the three religious symbols with the declaration in Bengali: ‘we are one, not alone’.

But what has caused a lot of anger and distress to a large number of Hindus is the playing of a recording of the azaan from the Puja pandal. Usually, Hindu religious songs in praise of Devi or recordings of the Chandi Path are played from Durga Puja pandals.

Santanu Singha, a Calcutta High Court lawyer, filed a police complaint invoking Sections 295, 295A and 298 (all dealing with hurting religious sentiments) at the local Phoolbagan police station on Friday evening.

“Playing azaan from the venue of a Puja is ridiculous and is a deliberate and mischievous act to hurt the religious sentiments of the Hindus,” Singha told Swarajya.

An azaan, the Muslim call for prayer issued by muezzins from mosques, commences with the takbir (‘Allah-u-Akbar’, or god is great) and is followed by the shahada which is an affirmation of the Islamic creed that reaffirms that ‘there is no god but god (Allah) and Muhammad is the messenger of god’.

“How can such an affirmation that there is only one god (Allah) be heard at the venue of a Hindu religious festival, and that too the biggest festival of Bengali Hindus? It is a direct affront to the religious sentiments of Hindus and aimed at hurting our sentiments,” explainmed Singha.

He said that if the police do not take cognisance of his complaint, he will take the matter to the Calcutta High Court.

Singha, who posted a copy of his complaint in his Facebook page, has named Trinamool leader Paresh Paul and nine others in the community Durga Puja’s organising committee in his complaint. The copy of the complaint and news of the playing of azaan has been shared very widely on social media since Friday evening. Thousands of social media users have strongly condemned the act and it has generated huge outrage.