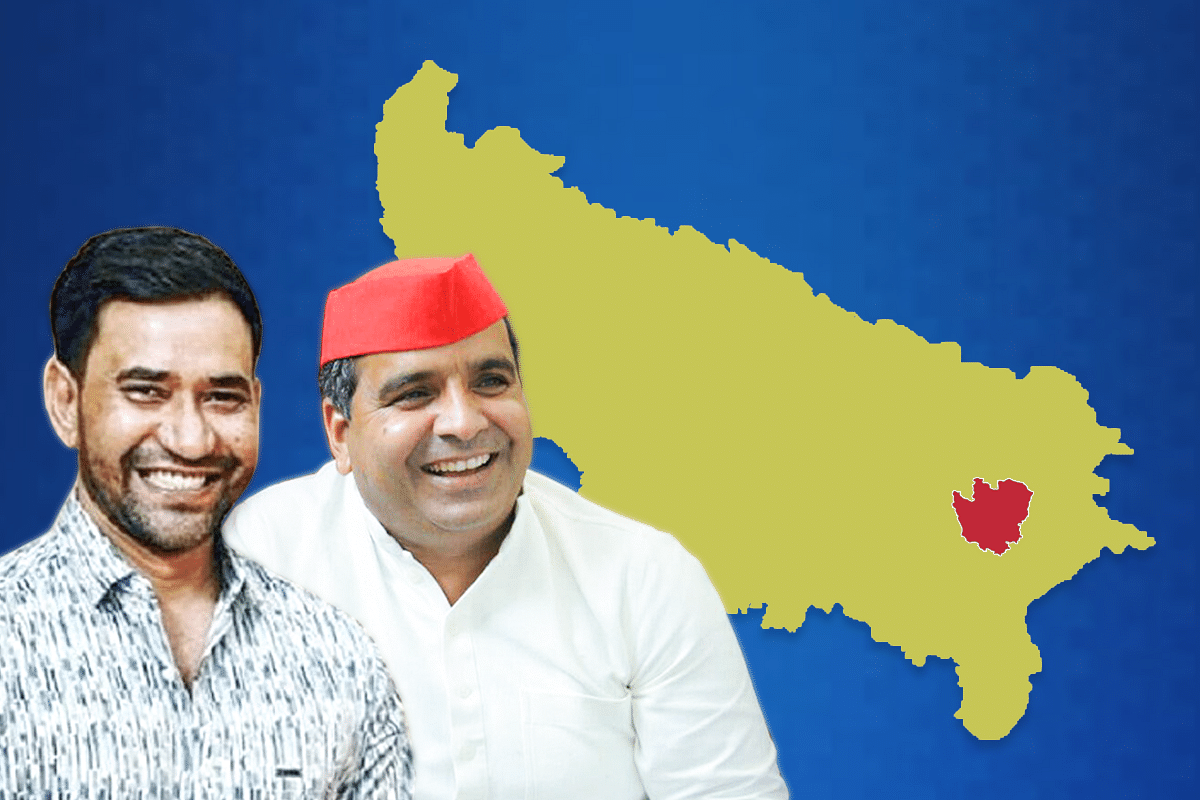 A by-election has been necessitated in Azamgarh parliamentary constituency of Uttar Pradesh because its winner in 2019, Akhilesh Yadav of the Samajwadi Party (SP), was elected to the UP legislature in March 2022. While the SP is expected to win the by-election scheduled for 23 June, on past form, the numbers suggest that we could also expect the unexpected.

Historically, the seat was won in 2009 by the Bharatiya Janata Party (BJP), after a delimitation exercise, in a messy three-way affair involving the SP and the Bahujan Samaj Party (BSP). But the SP won it in 2014, even if only by fielding none less than their totem, Mulayam Singh Yadav, and held it in 2019, by fielding his son, Akhilesh.

Embarrassingly, Mulayam only managed to get a bit more than a third of the votes, and his win margin of 6 per cent was wholly unbecoming of his political stature. This happened because the Muslim vote was still split between the SP and the BSP, even in the face of a ‘Modi wave’.

In 2019, a chastised SP decided on a risk-free approach, and swallowed humble pie to ally with their foes, the BSP, and the Rashtriya Lok Dal (RLD). The dividend was a sweep: Akhilesh got over 60 per cent of the votes, almost half of which were courtesy the BSP’s Muslim and Dalit vote bank.

Between 2014 and now, there were also two assembly elections — in 2017 and 2022. The electoral data of the five assembly seats which constitute Azamgarh parliamentary constituency were aggregated to see who the theoretical winner was. The SP won both times, but their vote shares were nothing to write home about, since they were not allied with the BSP in either foray.

That means the results of the 2019 general elections were an anomaly, which can be repeated in June 2022 only if some specific, rare circumstances with low probability of occurrence transpire.

A chart below summarises the seat’s electoral history:

The first observation is on the index of opposition unity. It has traditionally been low in Azamgarh, except in 2019, when the opposition banded together robustly. As a table below shows, on other occasions, a full third of the vote was with neither the SP or the BJP.

What this means is that a third of the vote is up for grabs by the two main parties. The implications of that key aspect will be analysed later in this piece.

In contrast, the SP and the BSP have always polled higher here than in the rest of the state. For example, in 2022, the SP polled 40 per cent, but its state share is under 37 per cent. Similarly, in 2022, the BSP polled 21 per cent in Azamgarh, but only 13 per cent state-wide.

Fourth, voter turnout tends to be slightly lower in by-elections. This can deflate the vote shares of a party affected by electoral apathy, and numerically make that of its opponent seem larger. For example, if the BSP’s turnout reduced by 4-6 per cent, it would have the effect of making the results seem more bi-polar, especially if the latter two increase their turnout by 1-2 per cent. It could also, under different circumstances, make the contest between the SP and the BJP appear tighter. Thus, discounting the opposition unity demonstrated in 2019, and considering the absence of any SP-BSP tie-up now, a reduction in turnout could affect the results.

Fifth, the BJP has improved its standing in Azamgarh over the past decade. From being third in all five seats in 2012, to second in four in 2014, second in three in 2017, and second in all five from 2019 onwards, the party has expanded its base.

Sixth, the Congress and the RLD have a negligible presence in Azamgarh, so they will not form a part of our electoral analysis.

Seventh, the data shows that the BSP’s Muslim vote has now largely shifted to the SP en masse. This shift, together with the sustained loyalty of the Yadav vote, is what has let the SP poll 40 per cent in 2022. This will probably be the minimum vote share the SP gets in the by-elections.

So, the big questions are:

One: which way will the residual BSP vote share of around 20 per cent go?

Two: How may the SP and the BJP increase their vote bases?

Thus far, the BSP’s vote bank had hitherto shown itself to be obediently volatile. When asked to vote for only their party, they did; and when asked to transfer their votes to the SP in 2019, they did that too. However, this sort of bland number crunching does a disservice to ground realities, especially when the BSP is now a spent force in Uttar Pradesh politics.

The reality is that the BSP won Mubarakpur assembly constituency in 2017 with 37 per cent of the vote. The SP was close behind, and the BSP’s win margin was a mere 688 votes. But in 2022, the BSP lost a full 15 per cent of its vote, not to the SP, but to the AIMIM’s Guddu Jamali, who is their candidate this time for the by-election. Indeed, the SP and the BJP gained nothing from the BSP in March 2022 here.

Similarly, in Azamgarh assembly seat, the BJP gained 7 per cent from the BSP in 2022 vis-a-vis 2017, while there was hardly any shift from the BSP to the SP.

Further, both the SP and the BJP have put up Yadav candidates. The latter’s ace is a popular Bhojpuri actor named Dinesh Lal Yadav, who goes by the screen name of Nirahua. He polled a respectable 35 per cent in 2019 against none less than Akhilesh Yadav, when bipolarity was at its peak. The situation is very different today.

The SP will find it as difficult to attract the non-Muslim, non-Yadav vote with the BJP, as whatever non-Dalit vote the BSP commands presently. The BJP, on the contrary, is potentially looking at a decisive, thus far-untapped vote base with the BSP.

What this means is that the SP has largely maxed-out the votes it can potentially get, while Azamgarh remains the BJP’s oyster, if only it can attract the 20-odd per cent still in the BSP’s kitty.

No doubt, eager forecasters may draw up scenarios in which the BSP’s Guddu Jamali splits the Muslim vote, while the Dalit vote shifts to the BJP. Their argument would be that perhaps, Indian Muslims are more fed up of secularism than people perceive.

But that is unlikely. A more realistic outcome is one in which the SP wins with around 43 per cent of the vote, the BJP improves to near 40 per cent, the ‘Others’ reduce to around 4-6 per cent, and the BSP drops to 10-12 per cent. The result will come down to how the residual BSP base votes. If they accept the futility of being a third pole, then the BJP could even win.