Beginning Of The End Of Naveen’s ‘Congress’ Rule? 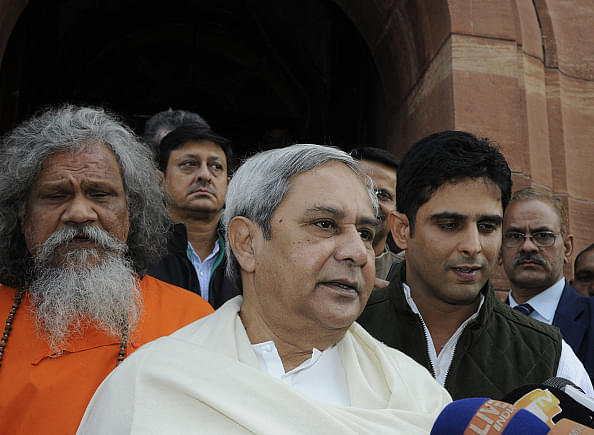 The result of Odisha Panchayat elections has burst the bubble of Chief Minister Naveen Patnaik and the ruling Biju Janata Dal (BJD). Ever since Patnaik took the reins of the state in 2000, he swept every election with a clear majority. This time, however, the Bharatiya Janata Party (BJP) has succeeded in making a giant stride in Odisha politics, leaving the BJD in a tailspin and pushing Congress into a corner.

Not long ago, the Odisha unit of BJP was dormant. In the 2014 general elections, when the nation voted for Narendra Modi, Odisha chose to vote for a scam-tainted BJD. But the Panchayat elections results show a turnaround of sorts.

Of the 853 Zila Parishads that went to polls in five phases, the BJP won 306 seats, while the BJD managed to win 460 and the Congress bagged a measly 66. The massive inroads the BJP made could only be understood when we look back at the results of the last Panchayat elections. In 2012, the BJD had won 652 seats, the Congress had bagged 128, and the BJP was a distant third, winning a meagre 36 seats. Arithmetically speaking, while the BJP’s tally has increased by 270, the BJD’s score has reduced by 191 and the Congress by 60. (These are unofficial figures. The State Election Commission will formally announce the figures on 25 February.)

These results are significant for two reasons. One, it is for the first time that the state has accepted the BJP. Two, for the first time after his 17-year-long rule, Naveen Patnaik faces a strong anti-incumbency. With a 9-fold jump in BJP’s tally, the message from the voters is loud and clear. The Panchayat elections outcome is a clean break from Naveen Patnaik’s politics of freebies and populism. Moreover, it has shattered Naveen’s TINA (There Is No Alternative) myth into pieces.

It is pertinent to mention that the BJP has successfully established its dominance in the entire western Odisha belt. More importantly, the party has made a clean sweep in Kalahandi, Malkanagiri and Mayurbhanj. Kalahandi is the district of Dana Majhi, the poor tribal who had to walk ten kilometres with his wife's dead body on his shoulder because the district hospital denied him an ambulance. Malkanagiri was the epicentre of Japanese encephalitis which claimed the lives of around 100 children.

Apart from a clean sweep in these three tribal-dominated districts, the BJP has got an absolute majority in Sambalpur, Bolangir, Deogarh, Sonepur and Bargarh. In coastal districts of Balasore, Kendrapada and Dhenkanal, the BJP has done remarkably well, though the BJD will form the Zila Parishads there.

This political turnaround in Odisha could be attributed to the following factors and sub-factors.

1. Resentment against Naveen: The Panchayat poll result is the manifestation of strong resentments against Chief Minister Naveen Patnaik and his BJD. But what prompted this resentment? Odisha gave a long rope to Naveen Patnaik, but in return, the state has very little to show off in his 17-year-long rule. It has failed abysmally on crucial sectors like health care, infrastructure and agriculture. In Naveen’s rule, there is a huge gap between Odisha’s potential and its performance. A kind of stagnation has plagued Odisha, and the state is struggling to recover from it.

Like his predecessor JB Patnaik of Congress, Naveen Patnaik’s tenure is also marked by mass corruption, which severely compromised the state’s development. Forget about policy, people are fed up with the BJD’s politics. With Naveen’s rule turning worst than that of Janaki Ballabh Patnaik, JB, a new “Congress rule” has virtually arisen. In this Panchayat elections, the simmering anger against Naveen finally burst open.

2. Naveen’s Bureaucracy, Sans Democracy: Naveen Patnaik is a rare phenomenon in Indian politics. Patnaik, who could not learn the language of the state he rules, runs the government through a coterie of trusted bureaucrats from the highly unpopular “Third Floor”. They not only run the government but also run his party – the BJD. These IAS officers are stronger than any of Patnaik’s Cabinet colleagues or senior functionaries of the BJD.

It is an open secret that in any department, the minister virtually reports to their corresponding secretary. Apart from running their departments, these bureaucrats also play key roles in the rank and file of the BJD. It is said that they not only formulate the election strategy of the party but also have the last word on the selection of candidates. This style of functioning has left a good number of senior party leaders – including some ministers – unhappy. This has resulted in an anti-Naveen voice from within the BJD. And this has something to do with the results of the Panchayat elections.

3. Naveen’s corrupt government: Corruption is rampant in Naveen Patnaik’s rule. Scam after scam has hit the state hard. Mining scam, Vedanta scams, coal scam, land scam, dal scam, rural jobs scam, chit fund scam, and the list goes on. Despite the outbreak of a series of scams, Naveen had managed to sweep all elections in the state till 2014.

But post-2014 elections, the chit fund scam came to light. Chit fund companies in Odisha were allegedly flourishing under the direct patronage of the BJD government. Unlike other scams, this one directly affected the common man.

As the results of the elections show, reality is finally catching up with the BJD.

4. The ‘feel bad’ factor: There is a galaxy of issues in Odisha which create ‘feel bad’ factors against Chief Minister Naveen Patnaik. The Dana Majhi incident, Japanese encephalitis deaths, farmers’ suicide, malnutrition deaths, tribals being squeezed out of their ancestral land, and the list goes on. They together result in a strong anti-incumbency against Naveen Patnaik. This Panchayat poll result is a reflection of that anti-incumbency.

5. BJP - Now truly a popular party in Odisha: Politics is all about strategy and the Panchayat elections results outline how the right kind of strategy has really worked in favour of the BJP. For the first time, the BJP is emerging as a truly popular party having grass root organisations. In Odisha, the party has successfully built its organisation from state headquarters to villages. It is important now that BJP maintains the momentum.

The results of the Panchayat elections show that people of Odisha have made up their mind for a paribartan (change). It won’t be wrong to state that Naveen Patnaik will find it extremely difficult to hold the party together post these results. In other words, the possibility of BJD splitting down the middle in the run up to 2019 elections cannot be ruled out. Observers say, “Come 2019, people of Odisha will show Naveen Patnaik and his BJD their place in history.” So is it the beginning of the end for Naveen Patnaik's “Congress rule”? Will the English Chief Minister pack up for the UK to write another book?