Beneath All Its Masks, The Kashmir ‘Conflict’ Was Always About Islam 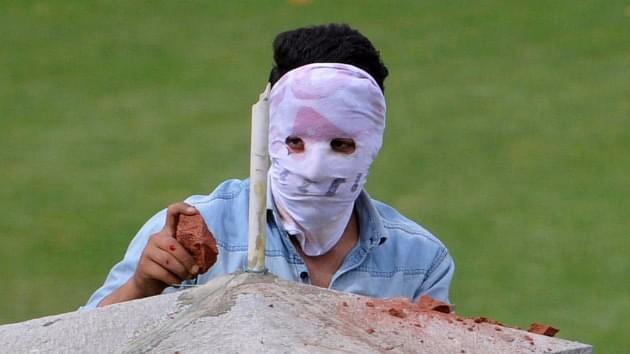 The lynching of deputy superintendent (DSP) of Jammu and Kashmir police Mohammed Ayub Pandith was shocking and reprehensible. He had spent almost 30 years in the force and risen slowly but surely through the ranks. His family, like many others from downtown Srinagar, were followers of the Mirwaiz clan, whose latest scion is the separatist leader Mirwaiz Umer Farooq; Pandith was part of Farooq’s security detail.

The journalist Rahul Pandita has described the incident, which took place on the intervening night between 22-23 June, on his Twitter timeline.

1. A long thread about the life and death of #MohammedAyubPandit, the slain DySP of #Kashmir police

What emerges from a perusal of these tweets and accounts of the incident compiled by other observers is chilling. Pandith, a practising Muslim and a member of the Jammu and Kashmir police force, was lynched on the twin suspicions of being (a) a Kashmiri Pandit and (b) an Intelligence officer. The man whose security Pandith was in charge of, did not even deign to meet the family of the deceased.

The slain DSP’s family had been ‘bakras’, as supporters of the Mirwaiz clan are known, for a few generations now. One is told that even as the lynching was carried out, Mirwaiz – supposedly the ‘spiritual’ head of the Kashmir Valley – continued his ‘sermon’ unabated.

To my mind, this incident and the declaration of the former Hizbul Mujahideen terrorist Zakir Musa that the movement in Kashmir was meant primarily to enforce ‘Shariah’ law are crucial. There is a veritable industry of peaceniks and assorted ‘intellectuals’ in Delhi as well as ‘pro-India mainstream’ politicians in the Valley who like to tell us that the unrest in Kashmir is more political than anything else, and that if the government does not talk to the ‘establishment’ separatists, there is a real danger that the jihadis might take over what has hitherto been a political movement. This messaging, done through a well-oiled public relations machinery, is swallowed hook, line and sinker by the Congress party’s managers as well as its ecosystem of journalists and academics. As a next step, this narrative finds expression in the form of op-eds in newspapers with ominous headings, all of which seem to suggest that India has “lost Kashmir” or that it needs to hold dialogues with “all stakeholders”.

In its own way, this incident provides an opportunity for the Indian government to show to its citizens, and the world at large, that this narrative is bunkum.

The Islamist face of the ‘Azad Kashmir’ movement today has been exposed to the world. The ‘paradise’ for the Ghazis, described in Firstpost as Robin-Hood-type figures, is identical to what the Islamic State has already created in Mosul and Raqqa. The likes of Mirwaiz and Shabir Shah and Yasin Malik are merely ‘taquiyyah’ practitioners who are engaged in lulling the gullible soft-hearted Indian liberals into some sort of false sense of security by repeating that their ‘tanzeem’ is essentially political in nature. The reality, as discussed, is far from the lies that have been peddled to us over the years. Pandith was killed for no reason but that a mob, abetted by the spiritual head of the Kashmir Valley, thought he belonged to a faith that was not Islam. How is it different from the treatment the Islamic State metes out to Yazidis or Shia Muslims?

I also have little doubt that our chattering ‘liberal’ class shall try and draw some sort of equivalence between what happened in downtown Srinagar to the depredations of the cow vigilantes in Rajasthan and Haryana. They are wrong here as well. The position of every enlightened Indian with respect to the latter is clear and unequivocal – the self-styled ‘gaurakshaks’ should be put behind bars and strict police action should be taken to ensure that such incidents are not repeated in the future. In fact, in several of these cases, the Bharatiya Janata Party (BJP) governments in various states made sure that the guilty were arrested.

What is further disheartening and exasperating is that the Kashmiri political establishment, including members of mainstream parties, has ensured that those who murdered Kashmiri Pandits still roam free. The infamous Farroq Ahmed Dar, alias Bitta Karate, is one example. The chilling details of his crimes have been documented both by Newstrack as well as Pandita in his book, Our Moon has Blood Clots. The wife of this murderer is, in fact, a senior bureaucrat with the state administrative service!

I hope all of this serves as a wake-up call to our bleeding hearts. It is all very well to sympathise with those who have suffered in the Valley. It is also very easy to blame the unrest on the BJP. However, it is equally important to keep in mind that in the 1980s, youth from the Valley cheered the West Indian team during a cricket match against India when the BJP did not even have two seats in its kitty. In another incident, some miscreants exposed their genitalia to Indira Gandhi during a political rally. In view of this and recent incidents, two things are clear:

(i) What the proponents of azadi in the Kashmir Valley want is a separation from India because the majority of its population is not Muslim and it has a secular Constitution. (Does anybody remember the slogan, ‘Pakistan se rishta kya la ilaha illalah’?) And this sentiment predates the BJP, the mosque-temple controversy and gaurakshaks.

(ii) What these people want to establish is Islamic State Raj and hence, there can be no scope for a dialogue with them.

The establishment of the legal system alluded to above would, inter alia, entail the imposition of a binary choice upon the non-Muslim population of Jammu and Kashmir – convert or die. The evidence for this proposition is the recent incident, described and analysed earlier in copious detail.

The way forward for the Indian government is clear. It must dismiss the Mehbooba Mufti government if the situation does not improve within a specified time frame. It should also impose President’s Rule. I had argued two years ago that the scope for manoeuvring for the BJP, as part of the Alliance, is quite narrow. Our security establishment should keep at whatever it is doing at the moment – eliminating terrorists. The late former director general of police of Punjab, K P S Gill, once said in the context of terrorism in Punjab that the moment insurgents realise that they will not survive for more than a month after making it to the government’s hit list, the insurgency dies out on its own. This template succeeded in Punjab and quite spectacularly at that. There is no reason why it should not succeed in the Valley.

India’s diplomatic establishment should also expend painstaking effort to convey the true murderous Islamic State-esque nature of the azadi sentiment that prevails in the Valley to foreign capitals like London, Paris and Washington, DC. The separatists, of all stripes, and their sympathisers should also be confronted with a binary – either stay as equal citizens of a democratic country or vote with your feet and leave! It is about time that we as a nation put an end to this tomfoolery once and for all.