Bengal: BJP Finds Itself In A Mess Of Its Own Making, Risks Erosion In Ranks 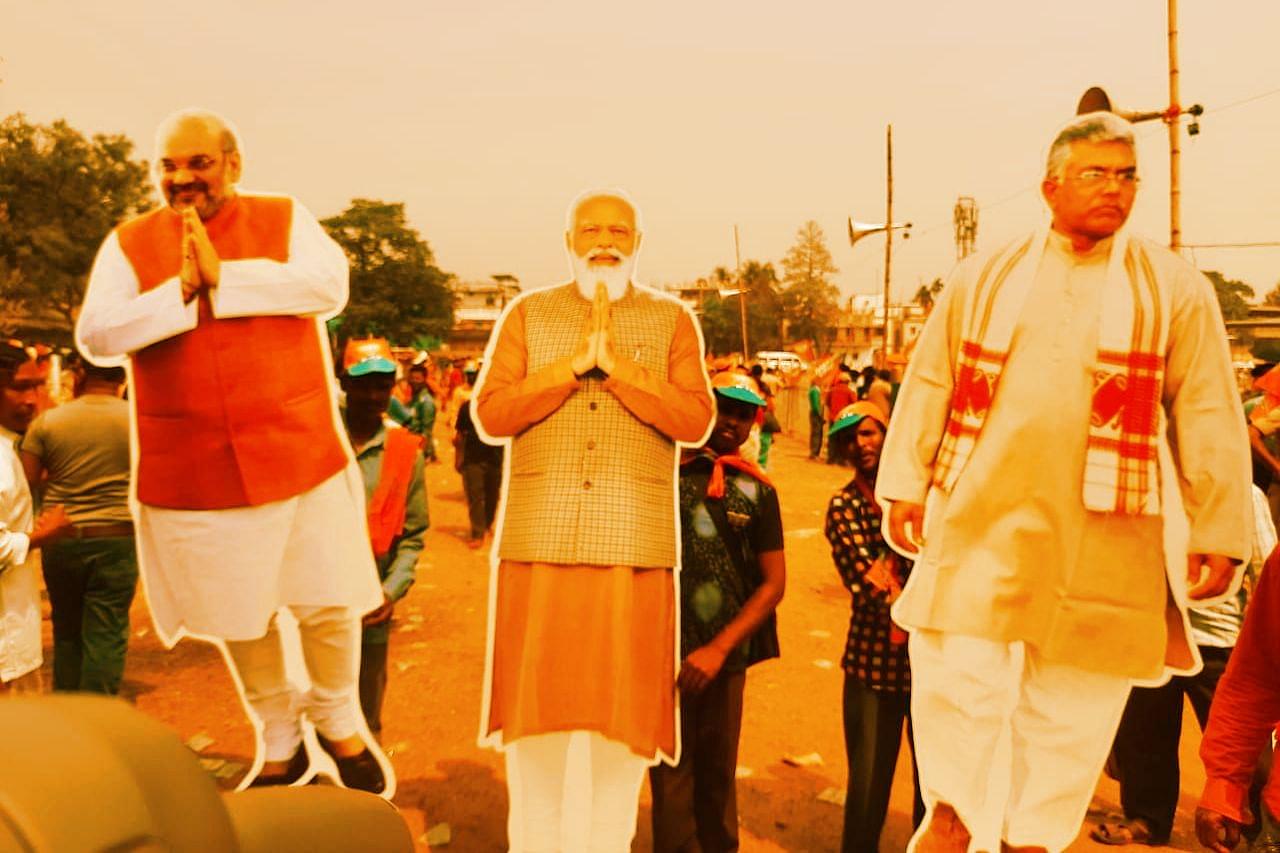 Scene from a BJP meeting in West Bengal (Twitter)

Mutual suspicion, recriminations, unseemly blame games, anger and frustration, and an overwhelming sense of despondency and resignation have become the defining features of the BJP in Bengal ever since the results of the Assembly polls were announced on 2 May.

While the results delivered a knockout punch to the saffron party, what made matters worse was the abandonment of party workers and supporters by most party leaders. That triggered anger and also a sense of helplessness among tens of thousands of BJP workers and supporters who felt they had been deserted by the party leadership and left to face brutal attacks by Trinamool cadres.

The crisis within the state unit of the party has been compounded by the inaction on the part of the BJP’s top central leadership to apportion responsibility for the party’s defeat.

Almost seven weeks have passed since the announcement of the Assembly poll results and till now, not a single head in the party has rolled.

It would be obvious to anyone that some disastrous moves made by a clutch of leaders--both in the senior positions in the state and those put in charge of party affairs in Bengal--have been primarily responsible for the disastrous results.

But none of these leaders have been made to pay a price for their blunders.

The manner in which senior party leaders, including those who were parachuted into Bengal to contest the elections, retreated into their safe shells and deserted all workers and supporters should also have attracted strong action against them (read this). But the BJP in Bengal continues to muddle its way through one blunder after another (read this and this). Expectedly so since the state party unit continues to be led and ‘guided’ by the same set of leaders who were responsible for the grievous setback at the hustings. This is what explains the 'go back' posters (with Bengal minder and national general secretary Kailash Vijayvargiya’s image on them) appearing outside BJP offices in Kolkata Friday.

The sense of despondency among a huge lot of office-bearers and workers of the party got more acute after the defection of Mukul Roy to the Trinamool late last week. Though Roy’s return to the Trinamool did not come as any surprise (read this) and some top leaders had some advance information about it, what is inexplicable is why he was not removed from the post of national vice-president of the party before his defection.

Some top leaders of the party are said to have learnt that Roy, who had been unhappy since he felt he was being sidelined, was in touch with Trinamool’s poll strategist Prashant Kishore and some other top Trinamool leaders even before the election campaign.That should have alerted the party leadership and led them to remove Roy from the top post he was undeservedly placed in. The national vice president of one party, and that too the BJP, defecting to a rival deals a severe blow to the party’s image and prestige, and should have triggered some action. There are also strong rumours of a couple of BJP Lok Sabha MPs and a few newly-elected MLAs--all of them known to be close to Mukul Roy--defecting to the Trinamool.

A huge number of BJP workers--mostly the ones who had joined the BJP from the Trinamool before the elections--have either returned to the Trinamool or are waiting in the wings to do so.

As for the committed BJP functionaries and workers, many have been driven out of their homes, beaten up and even murdered, many women molested and raped, and the ‘lucky’ ones who have escaped the Trinamool’s depredations have been subdued into silence.

Naturally, along with despondency, BJP office-bearers, workers and supporters are simmering with anger. State president Dilip Ghosh got a taste of it when he visited some parts of the state recently.

Save for some honourable exceptions--primary among them were Nandigram MLA Suvendu Adhikari, Barrackpore Lok Sabha MP Arjun Singh and Coochbehar Lok Sabha MP Nisith Pramanik--few other BJP leaders went and stood beside their party workers and organised resistance against marauding Trinamool cadres. “None of the leaders who used to deliver loud speeches and make tall claims came and stood beside us. We were abandoned. They (the leaders) only issued statements condemning the violence against us. Had they come in our midst, we would have gained the courage to fight back. Their presence would have boosted our confidence. We are not few in numbers and if we would have got support from our leaders, we would have resisted and not suffered so much,” said a BJP worker in Diamond Harbour. All BJP workers and middle and grassroots-level office-bearers Swarajya spoke to over the past one week repeated this.

A sore point among a large number of BJP functionaries and workers is that many candidates did not even bother to put in an appearance in the constituencies they had contested from, and lost, after the results were declared. “Had we known that our party candidate would disappear like this and leave us to our fates, we would never have worked for him. He was a stranger to us, but we unquestioningly accepted the party's decision to field him instead of a local and worked for him wholeheartedly. But after the day of polling, he disappeared. He only issued statements condemning the violence let loose on us,” said a BJP mandal president in a constituency in south Bengal.

Another contentious point, and one that generates a lot of raves and rants, was the decision by some senior leaders to accept all and sundry from the Trinamool. Party old-timers were ignored and Trinamool turncoats were promoted and given a lot of importance. Many were fielded as candidates. A number of such turncoats who were accorded the ‘red carpet’ treatment were guilty of perpetrating atrocities on BJP workers when they were in the Trinamool. That decision--to take in these turncoats en masse--proved cataclysmic for the BJP. But none of the leaders, including the ‘minders’ for Bengal who had hogged the limelight in the run-up to and during the polls, have faced any action till date.

The perceived shielding of all these leaders--those who adopted blunderous strategies as well as those who displayed utter lack of courage and moral fibre by abandoning party workers and supporters in their hour of crisis--has triggered a crisis in the BJP. What would be alarming for a party that places a premium on discipline is that loud murmurs of resentment against the party’s central leadership are being heard now. BJP office-bearers and workers have started questioning the role of the party’s top central leadership, and its silence and inaction.

Union Home Minister Amit Shah, who was closely involved in drawing up the Bengal poll strategy and in the high-voltage campaign, has not uttered a word against the post-poll violence. The same goes for Prime Minister Modi.

Many old-timers have dissociated themselves from the party. “The party that I loved, supported and worked for all these years showed its true colours when faced with a crisis. As in the case of a human being, a party’s true colours are also revealed during times of adversities. I will not work for the BJP any more,” said an angry and deeply hurt office-bearer of the BJP’s Nadia district committee. “I raised the issue of abandonment of workers by senior leaders, and was asked what they (the leaders) could do. I was told that I could not expect my party leaders to organise counter-attacks. I simply asked them what Mamata Banerjee would have done had her party workers been attacked by BJP. I asked them what Mamata Banerjee did when she was in the opposition in the state and CPI(M) cadres used to attack her workers. They had no answer,” the Nadia district BJP functionary told Swarajya.

The only silver lining, and the saving grace, for the crisis-ridden BJP is its decision to make Suvendu Adhikari the face of the party. Adhikari is seen to have the spunk--a quality that BJP workers and supporters feel is lacking in most other BJP leaders--to take on Mamata Banerjee. As someone who fought against and defeated Mamata Banerjee in Nandigram, Adhikari inspires confidence in BJP workers.

However, say many in the party, Adhikari should be given a free hand and senior party leaders who failed to deliver should not be allowed to have a say anymore. What BJP workers and supporters want to see is a purge in the party, and the heads of those who blundered should roll. Hope for the party’s rejuvenation lies only in such a course of action, they say.