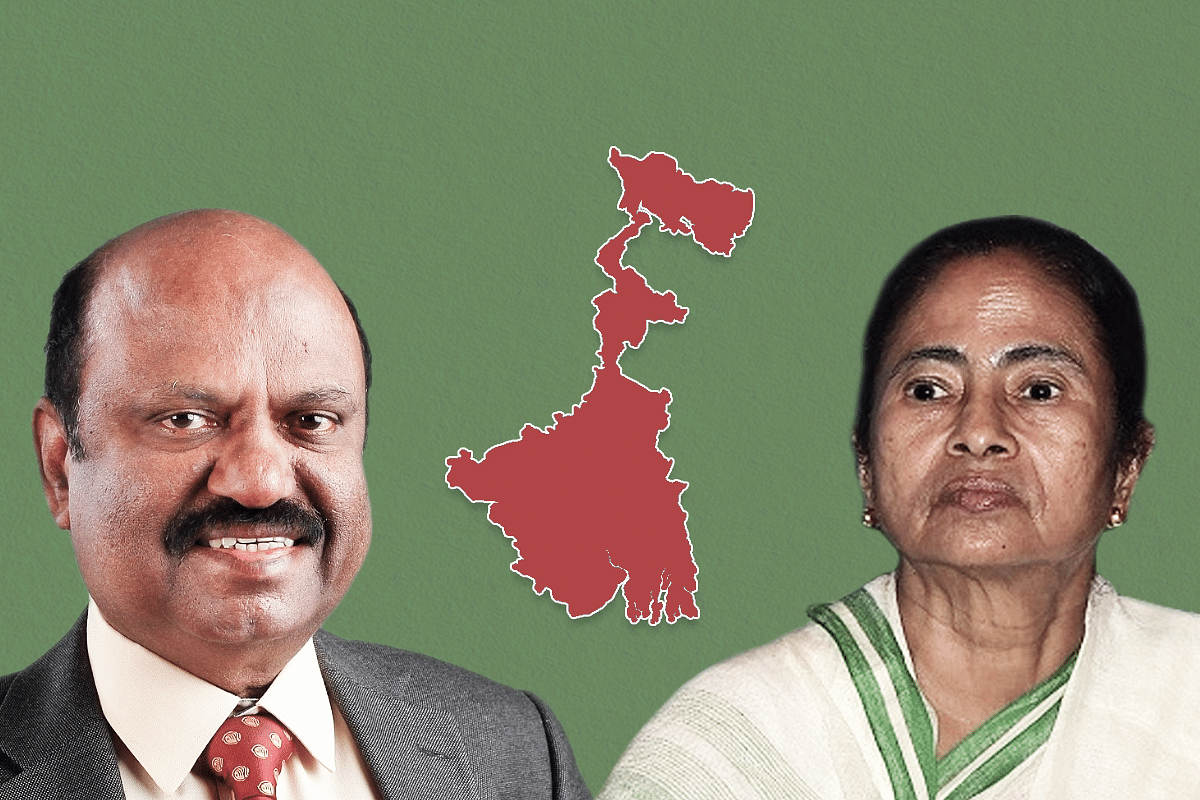 West Bengal’s new Governor C V Ananda Bose was sworn in at a simple but elegant ceremony at the ‘Throne Room’ of the Raj Bhavan in Kolkata Wednesday (23 November) morning.

Bengal Chief Minister Mamata Banerjee was one of the first to greet the former IAS officer after he was administered the oath of office by Calcutta High Court Chief Justice Prakash Srivastava at 10.45am.

The ceremony was boycotted by Leader of Opposition Suvendu Adhikari over seating arrangements that he termed ‘insulting’.

Banerjee walked up to the new Governor and exchanged pleasantries with him. Other senior cabinet ministers and Trinamool worthies, including party MPs, followed Banerjee in congratulating Governor Bose.

According to people present in the vicinity of the Governor when Banerjee walked up to greet him, the exchange between the two was very cordial. Banerjee reportedly assured Bose of all cooperation and wished him a successful tenure in the Raj Bhavan.

Banerjee requested the new Governor to visit all parts of the state and “experience the rich culture of Bengal”. She said her government would do its utmost to facilitate such visits.

The Chief Minister also spoke a bit about Bengal’s famous sweets and told the Governor that apart from the ‘rasagollas’ that he is fond of, many more new and innovative varieties of sweets are now available in Bengal.

The Governor, said people present there, was all smiles and was very courteous towards Banerjee. He also thanked her for the two handis of rasagollas she had sent to him Wednesday (23 November) morning.

But the Governor’s subsequent action would have left a bit of a bitter taste in Banerjee’s mouth.

Soon after the ceremony, the Governor granted an appointment to Leader of Opposition Suvendu Adhikari at his office in the gubernatorial mansion.

Adhikari was allotted a seat in the back row beside two MLAs — Krishna Kalyani and Biswajit Das. The two had got elected on BJP tickets but had defected to the Trinamool.

Adhikari (see his tweet) lambasted the “uncultured conduct” of the state information and cultural affairs department which made the arrangements for the swearing-in ceremony.

“In an absolutely disgraceful instance of uncourteous politics, the Leader of Opposition has been made to sit next to ‘soon to be disqualified’ MLAs Krishna Kalyani and Biswajit Das,” he tweeted.

Terming Mamata Banerjee as “the most wretched politician ever born in India”, Adhikari said he had sought an appointment with the Governor “at any time according to his convenience”. “It’s fine even if he asks me to visit (him) today,” Adhikari had said.

The Governor wasted no time as soon as he heard of Adhikari’s decision to boycott the ceremony in protest against the seating arrangements. He told his office to grant an appointment to the Leader of Opposition at 12.45pm.

“The Governor asked us to invite the Leader of Opposition at 12.45pm,” said a senior officer serving in the Raj Bhawan. He said it was not characteristic of a Governor to grant an appointment at such a short notice, and that too so soon after assuming office.

“Appointments are usually granted in due time unless the matter is very urgent. The Leader of Opposition had not asked for an urgent appointment,” said the Raj Bhawan staffer.

But by quickly accepting Adhikari’s request for a courtesy call immediately after the swearing-in, the Governor sent a subtle message to Chief Minister Banerjee.

The Governor, it is learnt, had enquired about the seating arrangements made for the ceremony after he got to know about Adhikari’s boycott decision.

His staff told Swarajya that the Governor appeared to be unhappy on learning that Adhikari had indeed been allotted a seat in the back row, next to the two MLAs who had defected from the BJP soon after the elections last year.

“It is clear that by granting an appointment to the Leader of Opposition immediately after assuming office, the Governor was sending a subtle but strong message to the Chief Minister,” said political analyst Surajit Chattopadhyay.

The message, added Chattopadhyay, was that he (the Governor) was not happy with the petty and vengeful attitude displayed by seating the leader of opposition in a back row next to the two MLAs who had left the BJP.

Significantly, the Chief Minister holds charge of the information and cultural affairs department that made all the arrangements at the swearing-in ceremony.

Mamata Banerjee, who micromanages everything, would definitely have known about and green-lighted the seating arrangements.

In fact, say those who know Banerjee well, the idea of seating her bete noire (Adhikari) next to the two MLAs would most likely have come from the Chief Minister herself.

“She has displayed such pettiness and vengefulness very often and I’m sure she is the one who gave this (seating) instruction,” said Adhikari.

Governor Bose’s promptness in granting an appointment to a peeved Adhikari immediately after his swearing-in ceremony — in fact, that was his first official engagement after assuming office — shows that the Governor was not pleased with the treatment meted out to Adhikari.

Adhikari reached the Raj Bhawan a few minutes early and was ushered into the Governor’s office immediately at 12.37pm. He spent 22 minutes with the Governor and, say BJP sources, was very satisfied with the meeting.

The subtle but strong signal that emanated from the Raj Bhawan Bose’s very first day in office would have been disconcerting for Mamata Banerjee who is keen on striking a personal rapport with Bose.

But Bose may not be willing to play softball with Mamata Banerjee. If morning shows the day, its a strong khela hobe na (won’t play your game) message from the new Governor to Bengal’s mercurial Chief Minister.