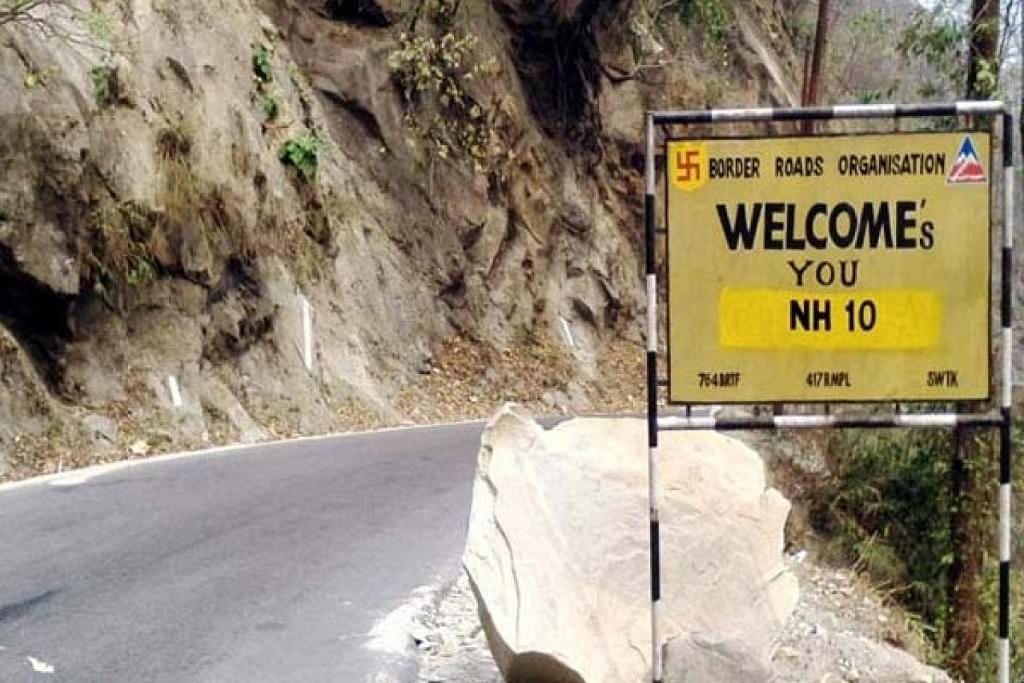 Sikkim is now dependent on only one highway (NH 10) which is its lifeline with the rest of the country.

Bengal's refusal to follow the law could derail a vital rail link to Sikkim and jeopardise national security. A 52.7 kilometre proposed rail link from Sevoke in Bengal to Rangpo in Sikkim is vital for not only Sikkim's economy, but also for quicker movement of troops and armaments to the frontier with Chinese-occupied Tibet.

The rail line, estimated to cost more than Rs 4,100 crore, will pass through forests which have human habitations. But the Bengal government has not implemented the Scheduled Tribes & Other Traditional Forest Dwellers (Recognition of Forest Rights) Act, 2006 – commonly called the Forest Rights Act (FRA) – in the Kalimpong and Darjeeling districts, even though it has done so in the other districts of North Bengal and in the rest of the state that have forests. The act protects the land and forest usage rights of forest dwellers and has been implemented in almost all parts of the country.

The non-implementation of the FRA in Darjeeling and Kalimpong through which the proposed rail line will pass makes the people of 24 forest villages that fall in the Sevoke-Rangpo rail project area vulnerable to arbitrary displacements and will deny them a fair compensation for displacement. The Himalayan Forest Villagers Organisation (HFVO), a newly-formed body to protect the rights of the rail project-affected people, says that without implementing the FRA, land cannot be acquired for the project. HFVO general secretary Lila Kumar Gurung says that under the law, the notified forest villages have to be converted to revenue villages before the land acquisition process kicks in.

But the Bengal government is adamant in not implementing the FRA in the two districts and has started the process of land acquisition in an illegal manner, alleges Gurung, who has found support from some opposition political parties. The state government has allegedly resorted to using strong-arm tactics to make the villagers fall in line. The Akhil Bharatiya Gorkha League (ABGL), which has considerable support in the Gorkha-dominated areas of North Bengal, says that the Bengal government has adopted dubious means to acquire land.

For instance, says the ABGL, the state government identified only 26 houses in just one village (Melli) which would be affected by the project. But almost the entire village of some 350-odd houses will be affected, claim the locals. State government officers held a closed-door meeting with the 26 families late last month and forced them to accept a meagre compensation package. Melli gram sabha chief Amrit Chettri said even he was barred from that meeting. But, as per the law, the gram sabha has to be taken into confidence and state government officers have to explain in detail the project, its fallout and the compensation package. It is the gram sabha which then deliberates on the project, and its consent is mandatory.

Activists also allege that a clear and comprehensive compensation package, as is mandatory under the law, has not been worked out. ''By not implementing the FRA, something which is long overdue anyway, the state government has taken the unethical and illegal route of refusing to recognise the rights of the forest villagers over their lands and, hence, denying them a fair compensation and rehabilitation package. It is not just compensation for the land they will lose, it is also their rehabilitation – getting them alternate sources of livelihood etc – that is important. But the state government is shirking its responsibility here and that is illegal,'' said an ABGL leader.

The district magistrates of Kalimpong and Darjeeling, however, maintain that work on implementing the FRA in the two districts has already started. ''There have been some hurdles in implementing the FRA earlier, but we will do it alongside the railway project,'' said Kalimpong district magistrate Dr Vishwanath. But this claim is contested by the HFVO and others. ''What he says beats all logic. The FRA should be implemented first and then the process of land acquisition started after getting the mandatory no objection certificates (NOCs) from the gram sabhas of the affected villages,'' said a HFVO activist.

The non-implementation of the FRA, the opaque manner in which the state government is acquiring land through alleged intimidation and the non-announcement of a compensation package has not only angered the locals, but is also pushing the HFVO and forest rights as well as environmental activists towards mounting a legal challenge. Such a legal challenge, fear railway officials, can derail the entire project. And, maybe, this is exactly what Bengal wants.

There are reasons for this apprehension. Bengal has not forgotten the support extended to the demand for a separate state of Gorkhaland (carved out of the hills and some portions of the foothills of North Bengal) by Sikkim Chief Minister Pawan Chamling, last year. Bengal has accused Sikkim of sheltering fugitive Gorkha Janmukti Morcha (GJM) leader Bimal Gurung. The Bengal government suspected Sikkim of providing refuge to Gurung. The railway line to Rangpo – and it will be extended another 60 km to state capital Gangtok in the second phase – means a lot to Sikkim, which is now dependent on only one highway (NH 10) which is its lifeline with the rest of the country. NH 10 remains cut off due to frequent landslides and land slips whenever it rains.

A rail link to Sikkim will boost the Himalayan states economy and also bring in more tourists to the state that is critically dependant on tourism. But more than all that, the rail link will plug a major gap in the defence logistics chain. ''The rail line to Rangpo (and later on to Gangtok) will result in much faster transportation of troops and equipment to the frontier and will enhance our preparedness. The highway to Sikkim is vulnerable to the vagaries of nature, and if some mishap occurs at a critical time, it could spell disaster. The rail line to Sikkim will give our defences a boost,'' said a senior army officer. Transporting heavy field guns and other military hardware through NH 10, which is quite narrow at many stretches, is a huge problem that the army faces.

The Bengal government, apart from wanting to teach Sikkim a lesson, could have another reason to be vindictive here. The residents of the forest villages that fall in the railway project area have been strong supporters of Gurung and remain so, much to the chagrin of Binay Tamang, who has been propped up by the state government as head of the GJM in place of Bimal Gurung. Tamang has publicly threatened the forest with eviction if they oppose the railway project. But those threats have not deterred the forest villagers from demanding the implementation of the FRA and fair compensation after completing all formalities as laid down by the law.

What baffles many is the attitude of the Bengal government. ''The present government cannot but be unaware of the pitfalls in forcible land acquisition. After all, it came to power riding on the tsunami of opposition generated by forcible land acquisition in Singur and Nandigram. And it also knows very well how such forcible land acquisition is struck down by courts. So knowing all that, it remains a mystery why it is wilfully violating the law and provoking the people to go to court and challenge the project,'' said forest rights activist Mrinmoy Sen. It seems as if the Bengal government wants the project to be derailed and would be happy if a legal challenge is mounted against it.

A state government spokesperson dismissed the allegations and claimed that the Mamata Banerjee government is going out of its way to fast track the project. “We have assured Sikkim that we will leave no stone unturned in ensuring speedy acquisition of land for the project,'' the spokesperson said. But, activists maintain that it is the haste and the manner in which the Bengal government is set upon acquiring land in an illegal and unethical manner, and the fact that it must be fully aware that it is doing so in violation of the law, that leads to grave doubts over the bona fides of its intention.

Of the 52.7 km that the rail link from Sevoke to Rangpo will cover, only a little over 1 km falls in Sikkim. The project was approved in 2008 and the foundation stone was laid in 2009. It was to have been completed in 2015 and the rail line from Rangpo to Gangtok in the second phase by 2020. The cost of the project has escalated due to delays to more than Rs 4,100 crore. The rail line from Sevoke to Rangpo will pass through 14 tunnels, the longest being 5.13 km, and 30 bridges. The Supreme Court greenlighted the project in February 2016 with strict instructions that guidelines laid down by the National Wildlife Board – speed restriction on trains passing through forests, installation of wireless animal tracking sensors and digging tunnels only during daylight hours – be adhered to.